After months of persistent pressuring and litigation, the City of Houston backed off its threats to seize the property of two historic churches in the City’s Fifth Ward 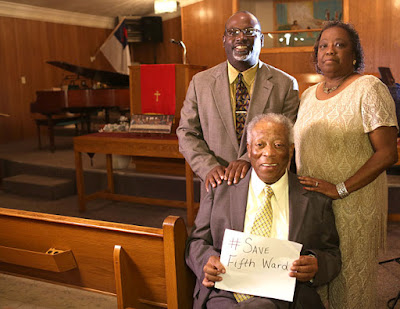 “This is a significant victory for churches everywhere, and a lesson for government authorities on all levels—” says Kelly Shackelford, President and CEO of Liberty Institute, “that you can’t just take a church’s property for the purpose of increasing tax revenue or public use.”

Liberty Institute stepped in on August 4, 2015 alongside volunteer attorneys from Baker Botts LLP, suing the Houston Housing Authority for their unlawful threats against both churches. After a hearing on August 31, the HHA rescinded their threat to bulldoze the Christian Fellowship Missionary Baptist Church.

In late October, HHA representatives informed Liberty Institute attorneys that they were also abandoning all efforts to take Latter Day’s land. Now that threats against both churches have been dismissed, the members can continue to exist and minister in historically infamous neighborhood.

Eighty-three-year-old Bishop Roy Lee Kossie, who is celebrating his 60th pastoral anniversary this year, says, “We are overjoyed that we can now continue to minister to the Fifth Ward without fear of losing our property. This is where the Lord called Latter Day Deliverance Revival Church to serve and this is where we can now stay.”

“We applaud the Housing Authority for making the right decision and respecting the right of this church to continue its ministry in the Fifth Ward,” said Aaron Streett, Liberty Institute volunteer attorney and partner at the law firm of Baker Botts. “Churches are vital to our communities and government should never threaten to push churches off their own property.”

“Our clients are thrilled that they can continue ministering in the same community where they have been for 60 years without the heavy hand of government threatening to seize their property,” said Jeremy Dys, Senior Counsel for Liberty Institute.

BACKGROUND: WHY THE CHURCHES’ MINISTRIES ARE SO VITAL

Houston’s Fifth Ward is known for its history of violence and crime. In 1979, Texas Monthly magazine called it “Texas’ toughest, proudest, baddest ghetto.” Locals referred to it as “Blood Alley.” But it was exactly where Bishop Roy Lee Kossie of Latter Day felt called by God to plant a church. In 1965, he founded the Latter Day Deliverance Revival Center on Lyons Avenue. A few years later, Pastor Quinton Smith arrived to pastor the Christian Fellowship Missionary Baptist Church in the same area.

“When we moved in to this area, it was considered the highest crime rate area in the city of Houston,” said Kossie. “People shot first and asked questions later. But we loved these people. We loved this community. We knew this was exactly where we needed to be.”

After decades of serving in the community, the churches helped transform the Fifth Ward into a safer place. The Latter Day church used to be flanked by a nightclub and what Kossie called a “honky tonk.” Today, a church-run food pantry and youth ministry center have replaced them.

Over the years, the church developed outreach programs to minister to drug addicts, alcoholics, and gang members—and their efforts are working.

Bishop Kossie loves to share how a young Black Panther came to the church, got saved, and was later trusted to serve “with a badge.” He also notes that, since the founding of the church, violence in the Fifth Ward decreased, alcoholism declined, marriages have been saved, and children thrive. He attributes this to the blessing of God and to the faithfulness of the church leaders, who have reached out to the community for decades with love, patience, and faith.

The Houston Housing Authority persistently pressured the pastors to sell the churches’ property, holding out the threat of using eminent domain to take the property if they would not sell. Bishop Kossie and Pastor Smith steadfastly refused to leave, even when the HHA began eminent domain proceedings.

“This is our home,” Kossie said at the time. “This is where the Lord called us to serve and this is where we want to stay. We aren’t giving up without a fight.”

Thanks to their fight—with the help of attorneys from Liberty Institute and Baker Botts—Kossie, Smith, and their churches’ members can stay in the Fifth Ward.

During the proceedings, Liberty Institute and Baker Botts asserted that the city’s threats of eminent domain against the two Houston churches violated Texas’ religious freedom law, including the Texas Religious Freedom Restoration Act. They noted that the churches have served as pillars in the Fifth Ward’s spiritual and social community for decades and that the City’s actions would force the churches out of the community they have served for over half a century.

While the HHA maintains that they would like to purchase the coveted church property should either church ever decide to sell, they have promised to cease all efforts to seize the land by force.

“The HHA realized that they cannot seize a church’s property and give it to some other business in violation of the law.” Liberty Institute Senior Counsel Jeremy Dys said. “Their decision to dismiss eminent domain proceedings will allow the Latter Day to continue their many outreaches that are so vital to this community.”