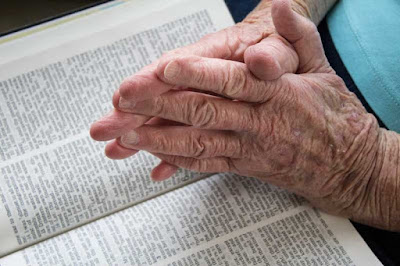 Men and women at a San Antonio senior citizen center set bold examples this summer for any Americans who value religious liberty. When the Northeast San Antonio Multi-Service Senior Center told members that they couldn’t discuss religion or pray, they refused to give up their faith or their freedom. With encouragement from Liberty Institute, their determination paid off—and quickly.

Wednesday is needlepoint day for 16 members of the Northeast San Antonio Multi-Service Senior Center. The group has met for about two years, and, according to members of the group, the most popular pattern of conversation is current events and religious beliefs.

The women come from a variety of religious backgrounds, including Catholic, Jehovah’s Witnesses, and non-denominational. Many, however, didn’t have Bibles when the needlepoint group started. Center volunteer Sylvia Satterfield solved that problem, joining the women in their needlepoint gatherings and providing Bibles to women who wanted them. Sylvia also offered explanation of the Scriptures for those that had questions.

All attendance and participation in the needlepoint group was voluntary. In fact, the group claims that over time, 14 of the 16 women decided to become Christians, and each of the women offered prayer requests and accepted personal prayer from Sylvia.

In July 2015, things changed. After receiving a complaint from one of the members (which actually generated from a personal misunderstanding within the group), the management at the senior citizen center delivered a blow to the needlepoint gang; no more talking about religion, no more praying.

“We can’t have that here,” the director said.

The management’s new rule cast a disheartening shadow over the members of the needlepoint group. According to Sylvia, many of the women felt that they couldn’t talk about religion in the center at all. She even saw one woman hiding her Bible, afraid of getting in trouble. Bibles themselves hadn’t been banned, but talking about the Scriptures was prohibited.

Some of the women were low-income, minority, and unable to speak English. The only daily meal they could count on was at the senior center. Now, they feared being kicked out because of their religion.

YOU CAN’T TALK ABOUT IT

The needlepoint women at San Antonio senior center weren’t the only ones told to quiet down. “Let’s Talk About It” is a discussion group of 20 members that meets at the center on Friday mornings at 10 a.m. What do group activities include? Talking about whatever you want—that is, until July.

In addition to telling the needlepoint ladies to close their Bibles and stick to their stitch work, the same management told members of “Let’s Talk About It” that discussions of politics, religion, and sex were all off limits. They weren’t even allowed to mention the then recent Republican debate—a hot topic that members were eager to discuss.

When challenged by the members, the management remained firm, declaring that members of the senior center had to “live by the city rules”— which impeded rights of free speech and religious expression.

Fortunately, John Mitchell, a 68-year-old group member, knew better than that. He also knew about Liberty Institute, from years previous when Liberty Institute defended his brother in a case involving handmade crosses and a community college. John gave Liberty Institute a call, telling the attorneys about the situation at the senior center.

Liberty Institute immediately prepared to help both groups defend their religious liberty rights. But what began as a troubling controversy turned out to be nothing more than a summer fling.

According to Sylvia, who spoke with Liberty Institute last week, management at the Northeast San Antonio Multi-Service Senior Center has rescinded their rules against religious discussion, telling both groups they are free to discuss any topic, including religion, as they please.

But an educated citizenry is a powerful force. In San Antonio, members of both the discussion and needlepoint groups valued their freedom enough to stand up for it. When they called Liberty Institute for help, they were fully prepared to do whatever it took—no matter the legal battle. The fact full restoration of rights happened so quickly in this instance is a blessing indeed.

Both the members of the San Antonio Senior Center and the management have set important examples—that sometimes, all it takes is some determination and correct information for religious liberty rights to be upheld.

Liberty Institute applauds the management of the Northeast San Antonio Multi-Service Senior Center for realizing their mistake and affirming the First Amendment rights of the members before legal action was necessary. There is no law that prohibits free speech or expression of religious beliefs, even in a City-owned center.

That is exactly why it is so crucial to stay informed about your religious liberty rights. Take advantage of the educational resources Liberty Institute has to offer, share the information with others, and stand up for your rights when they are attacked. As the needlepoint ladies and the San Antonio discussion group have proved, it will make a difference.

5 Reasons to Keep Religion in the Military