What Would George Washington Say About Religious Freedom?

America’s first President weighed in on the importance of public religion. 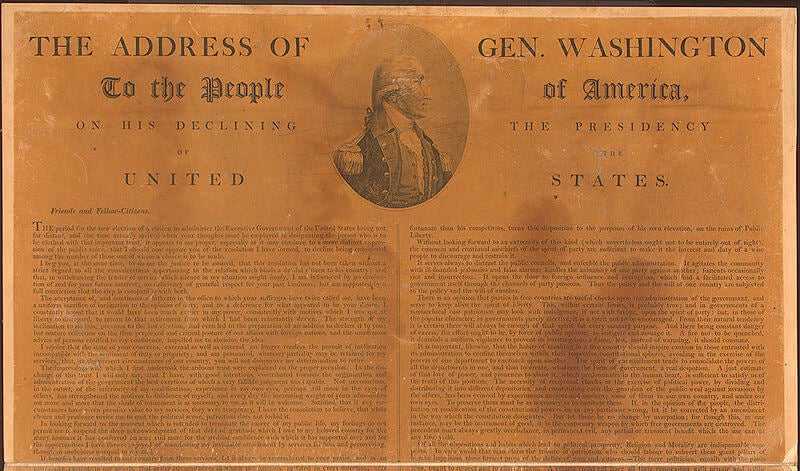 This past Monday marked the 230th anniversary of President George Washington’s Farewell, published September 19, 1796 to announce he would not seek a third term in office. Though the President accepted editing advice from Alexander Hamilton and James Madison, the final 32-page manuscript was written in Washington’s own hand and strongly expressed his sentiments in a typically modest, dignified style.

At the core of his “address” to the American people: religion. Washington included a plea for religious freedom as the ground on which the political, economic, and social success of the nation, must stand.

Much of the address was couched as the “warnings of a parting friend.” President Washington’s pressing concern was maintaining the unity of the nation. Less than a decade had passed since the controversial ratification of the United States Constitution—controversial largely because of sectional dissent and suspicion that the price of a more unified country would be a federal government apt to grow too big, too powerful, and out of control.

So Washington reviewed the arguments for the new system of government, especially the separation of powers and the careful balance of central and decentralized government. He recounted the virtues of this system for the “happiness” of the people.

But he also reviewed the dangers inherent to the new government, chief among these being a partisanship (“the spirit of party”) which could become so fierce that the country might fall prey to any of three fates: (1) Paralysis caused by non-stop infighting; (2) Disintegration; (3) One faction exploiting the system to seize virtually total control. 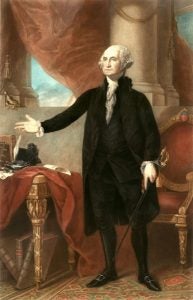 These remain significant concerns for us today.

Why? Because, as Washington stated, the Framers of the Constitution assumed that human nature would indeed produce dangerous factions—factions that in a free society, with “popular” rule, are particularly risky. Washington warned:

“This spirit, unfortunately, is inseparable from our nature, having its root in the strongest passions of the human mind. It exists under different shapes in all governments, more or less stifled, controlled, or repressed; but, in those of the popular form, it is seen in its greatest rankness, and is truly their worst enemy.”

And so the Founders built a system that would channel such factions so that these would effectively balance each other to preserve freedom. No faction would gain inordinate control, yet the entire government would provide a framework to induce enough unity to propel society forward. Government would be limited, but ordered and efficient enough to give Americans the needed structure for “the preservation of your government, and the permanency of your happy state.”

But despite this careful design, Washington warned, the Constitution could fail.

Even with its checks and balances, the risk loomed that the inevitable surges of factionalism could overrun America’s constitutional banks and wash away freedom, stability, and prosperity.

What was the ultimate safeguard? Religion.

Washington urged a continued reliance on public morality, which required religion (and religious freedom). Here are some excerpts from this crucial passage of Washington’s final address to America:

“Of all the dispositions and habits which lead to political prosperity, religion and morality are indispensable supports.”

“Where is the security for property, for reputation, for life, if the sense of religious obligation desert the oaths which are the instruments of investigation in courts of justice?”

“ . . . let us with caution indulge the supposition that morality can be maintained without religion.”

“Whatever may be conceded to the influence of refined education on minds of peculiar structure, reason and experience both forbid us to expect that national morality can prevail in exclusion of religious principle.”

And there you have it. Without “national morality” and public “religious principle,” even the exquisite machinery of the U.S. Constitution would be inadequate to preserve freedom and all its benefits.

Students of Washington will recognize this theme in his thinking as early as 20 years before the Farewell Address, when he insisted on a chaplain’s corps in the Continental Army to motivate a diverse religious spectrum of soldiers. For George Washington, the sublimely spiritual was also the profoundly practical. This is the Washington who also envisioned America as a haven for religious freedom where various denominations of Christians, Jews, and others would live side by side in harmony, all openly exercising their beliefs.

Those who stand up for religious freedom today are people who take the warnings of George Washington’s Farewell Address seriously. And with good reason. Today, “the spirit of party” still threatens to tear apart the fabric of the nation. Today, centralized power is more of a threat than ever. Today, secularist culture warriors endeavor to manipulate government and corporate power to drive religious liberty and religious influence into the shadows. Americans would do well to listen to the parting advice of the father of their country.

Christopher Corbett is VP for Strategic Communications at First Liberty.