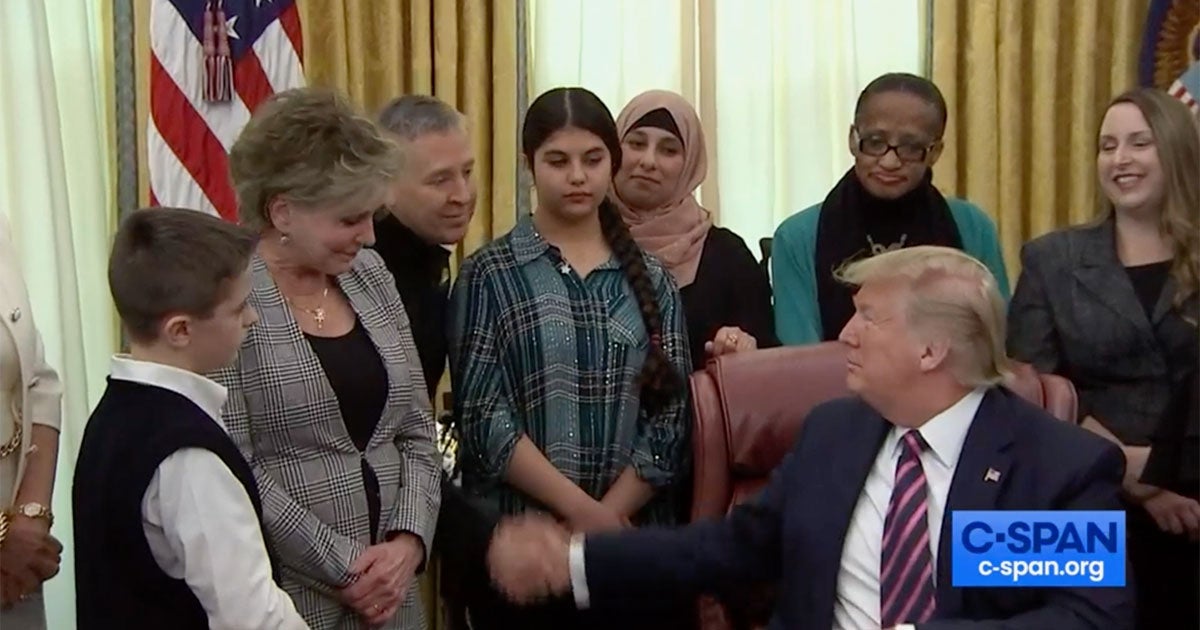 Last week, on Religious Freedom Day, First Liberty celebrated a major victory for the rights of students, teachers, coaches and public employees who want to freely live out their faith in school.

Our President and Chief Counsel, Kelly Shackelford, along with First Liberty clients Hannah Allen and Coach Joe Kennedy, joined President Trump in the Oval Office to participate in the announcement of several actions by the administration to protect religious freedom for all Americans.

In this exclusive video, watch as Hannah and Coach Kennedy share their stories at the White House. Hannah recounts how First Liberty successfully defended her constitutional right to pray with friends during lunch hour after she was ordered to stop and “go behind a curtain” by school officials. It’s worth mentioning that Hannah can be seen wearing an inspirational replica dog tag provided by our clients, Shields of Strength.

Coach Kennedy also tells about his ongoing legal battle after he was fired by school district bureaucrats for praying on the field after football games.

Here is a brief breakdown of the three important actions the administration recently took to protect your religious freedom.

As we enter into what could be another historic year in reclaiming religious liberty in America, we are thankful to the administration for continuing to make religious freedom a priority. The actions above will help end religious discrimination and ensure people of faith will be treated equally when they seek to partner with federal or state governments to provide services to communities nationwide.

Yet, while we rejoice in this major victory for students, teachers, coaches and school employees, we cannot ignore there’s still an All Out war on faith and religious expression.

Now more than ever, the enemies of religious freedom are aware of the unprecedented progress we’re making in reclaiming our First Freedom. And it’s certain they will move to fight these key actions by the administration.

That’s why at this pivotal moment we cannot become complacent, and must instead capitalize on the incredible opportunities God has presented to us to secure more lasting and precedent-setting victories.

Together, we can build on the momentum and set up a bright future for religious freedom in our nation—for our children and grandchildren.

With your financial support, we can keep winning and reclaiming religious freedom for people of faith in America.