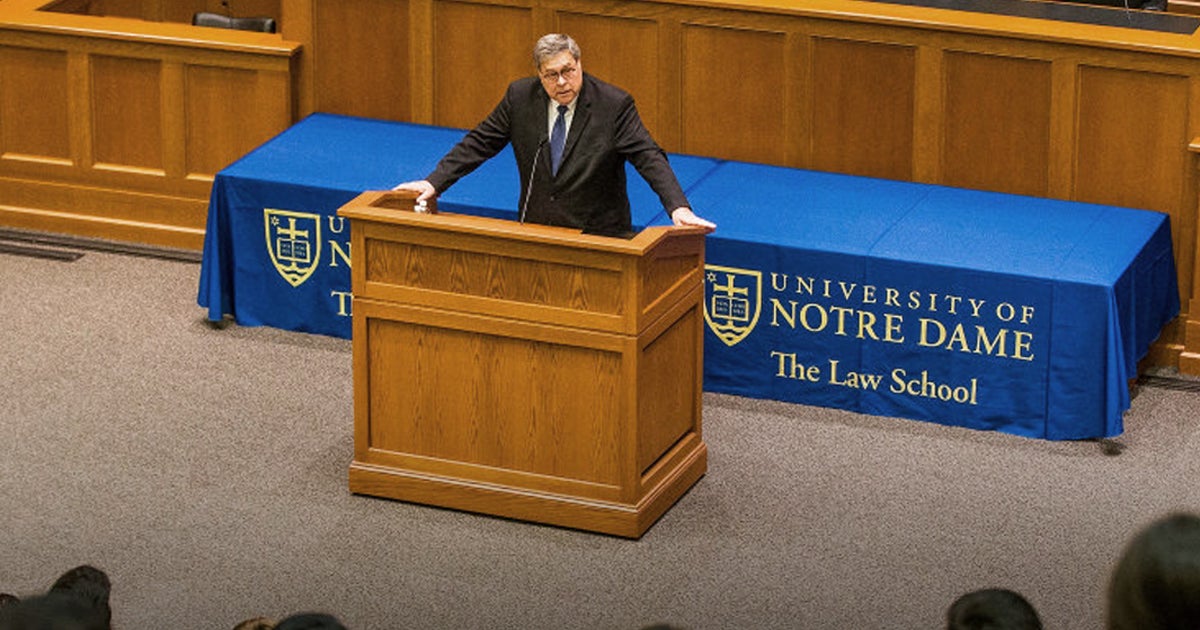 Attorney General William Barr delivered one of the most exceptional speeches in modern memory at the University of Notre Dame recently. Judging from his detractors, it seems his remarks landed heaviest on those mystified by the idea of religious neutrality.

Barr began his remarks by noting that his office not only defends the free exercise of religion, but also guards against “states misapplying the Establishment Clause in a way that discriminates against people of faith.”

He invoked the words of the Founding Fathers to demonstrate that the authors of the Constitution believed that a moral standard was essential to the success of a self-governed people. Indeed, the Framers feared the loss of a common moral restraint on human will.

Or, as Barr put it: “No society can exist without some means for restraining individual rapacity.”

Abandon a common moral restraint and a formerly self-governed people will turn to either tyranny to forcefully apply such restraints, or licentiousness to unbridle any restraint in pursuit of individualism. Thus Barr laments the modern replacement of the Judeo-Christian moral system with an activated secular creed.

It is “not decay” that plagues our modern society, Barr argued, but “organized destruction.”

“Secularists and their allies among the ‘progressives,’ have marshaled all the force” of the modern era “in an unremitting assault on religion and traditional values,” he said.

Today, the opposition is on the march to STOP YOU from freely living out your faith. Will you join First Liberty’s growing army of supporters in the fight to protect religious freedom? Give today.

So much so, Barr observed, that this “secular project has itself become a religion,” with all the zeal and accouterments of religion, “including inquisitions and excommunication.”

While the conscientiously defiant may not burn at the stake, today’s high commissions for non-discrimination fine them, gag their speech or threaten their professional existence.

Whereas the First Amendment welcomes all forms of speech, encouraging better speech to counter disagreeable speech, “militant secularists today do not have a live-and-let-live spirit,” Barr said.

Not surprisingly, the speech was too much for progressive defenders of secularism.

Jeffrey Toobin in The New Yorker bluntly described it as “the worst speech by an Attorney General of the United States in modern history.” Catherine Rampell called it “a tacit endorsement of theocracy” in the Washington Post.

Paul Krugman lambasted Barr in the New York Times for even giving the speech, noting that Barr sounded “remarkably like America’s most unhinged religious zealots” who commit “mass murder because schools teach the theory of evolution.”

Barr’s critics prefer secularized neutrality, which isn’t neutral at all.

Modern activists—who Barr calls “militant secularists”—are hell-bent on demanding the redefinition of the term to one in which neutrality may only be achieved through forced secularity.

It is indisputable that Judeo-Christian values played a significant role in the founding of this nation.

From pilgrims fleeing religious oppression in Europe to James Madison’s outrage over Anglican Virginia jailing Baptist ministers, America’s founding era is replete with efforts to preserve space for people of faith to be people of faith independent of the government’s preferred religion. Such historic toleration is what should rightly be called “neutrality.”

Yet in the march to secularized neutrality, government agencies force Aaron and Melissa Klein in Oregon to speak a government-approved message or lose their business, Dr. Eric Walsh in Georgia must shed his religiosity in order to qualify for employment, and Christian schools are denied the use of the public loudspeaker to pray before kickoff.

Critics of Barr’s speech would do well to remember the past administration’s efforts to force celibate nuns to purchase birth control. Forced conformance to the government’s ideological position abandons any mask of neutrality.

Firing someone from their government job for something said as a lay minister is hostility toward religion, not neutral toleration of it. Preventing Cambridge Christian School in Tampa, Fla., from pre-football game prayer censors religious speech in preference to government-imposed silence.

Despite their protestations, militant secularists have convinced themselves that forced secularization is the only path to enlightened neutrality. It is not. The genius of the Constitution—what Barr called a “quantum leap in liberty”—is that it guards against hostility masquerading as neutrality.

If anything, Barr’s speech is a critical call for a return to a time when notions of free speech and religious liberty were embraced by the religious and secular alike in pursuit of freedom.

This article was originally published on Fox News on October 19, 2019.