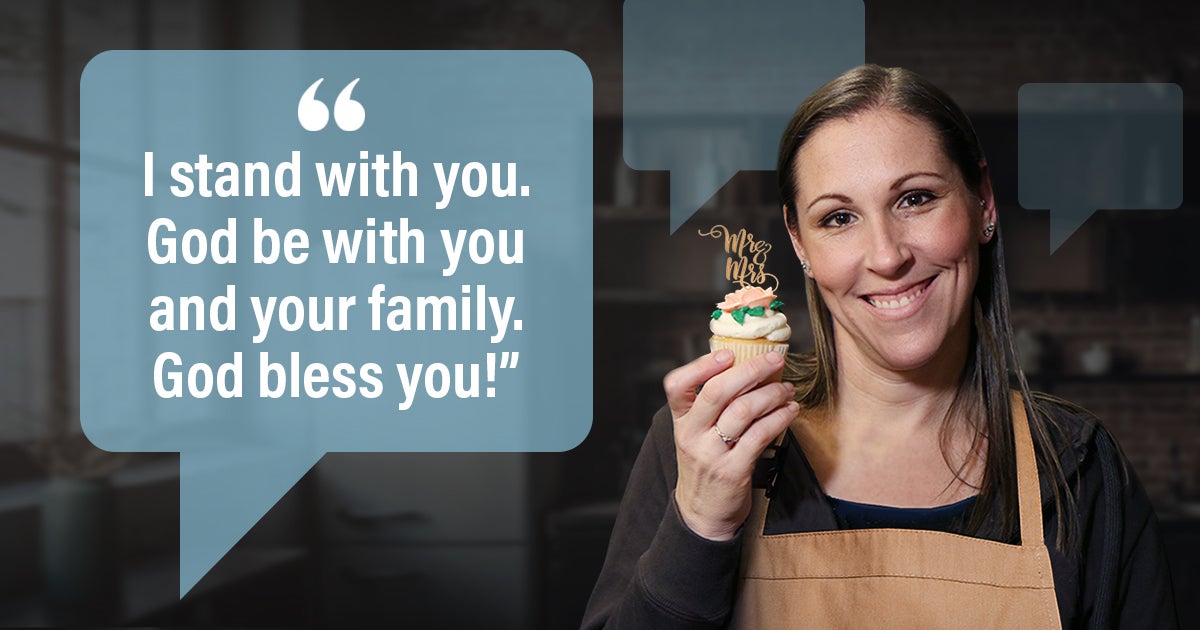 Can being a person of faith in America get you “cancelled?”

If we take a moment to scan recent headlines, it doesn’t take long to find example after example of people of faith, and even faith-based businesses and organizations, who’ve been “canceled” by the media, anti-religion activists…or even by hostile government officials and outrageous court rulings.

There are countless cases of people of faith facing censorship or retribution for expressing their beliefs. Yet, one of the worst cancel cases that’s taken place in the past few years is that of SweetCakes by Melissa.

As a First Liberty supporter, you’re familiar with Melissa Klein, who declined to create a specialty wedding cake for a same-sex couple because of her sincerely-held religious beliefs. And because she chose to operate their business according to her faith, this Oregon cake artist became engulfed by the hostile Left’s toxic cancel mentality.

Not only were the Kleins met with hate and slander from people on social media, but the government made it a point to target Melissa and her family directly because of their faith.

To begin with, Oregon officials forced Melissa to pay a $135,000 penalty that effectively destroyed her business. If she hadn’t, the government would have forced her to violate her deepest convictions—something that is starkly anti-American. She was punished with this steep fine just for wanting to run her business consistent with her faith.

In addition to the financial punishment, state officials felt the need to force Melissa to conform to the cultural orthodoxy. Toleration of different beliefs wasn’t enough—the government sought to coerce her to celebrate the ideas with which she disagrees, even suggesting her family needed to be “rehabilitated” in their beliefs.

Let that last statement sink in for a moment: the government called for its citizens to be “rehabilitated.” Is this where our country is headed?

Surely, the current cancel culture is unrelenting in its opposition to people of faith. Yet, the Constitution is clear in protecting everyone’s right to express and live according to their deepest convictions—whether they are religious or not.

Thankfully, despite the shocking barrage of hostility, there is hope.

The U.S. Supreme Court stepped in last June and sent a clear message to Oregon officials: award-winning cake artist Melissa Klein deserves the same protection from religious discrimination that was afforded to Jack Phillips in his Supreme Court victory with the Masterpiece Cakeshop case.

But even with these encouraging steps in the right direction, the Kleins’ journey has been a long and difficult one—and nobody should ever have to go through religious oppression alone.

While opponents of religious freedom may be fixated on cancelling and punishing people of faith, First Liberty and our supporters are standing strong with Aaron and Melissa.

Displayed below are a bevy of recent comments from First Liberty followers, like YOU, who’ve expressed your support for Melissa and her family through a long and arduous legal battle:

Along with you, First Liberty will continue to stand strong and stop opponents of religious liberty from trampling the rights of sincere people of faith like Melissa.

As we wait on a final ruling in the SweetCakes case, we’d like to say thank you to all of our incredible supporters who constantly pray and write messages of encouragement for Melissa and her family. We deeply appreciate you expressing to this kind-hearted, hardworking mother of 5 that her fellow Americans have her back in this fight.

Censoring or cancelling people of faith because of their beliefs is starkly un-American.

Please join First Liberty in the fight to deliver #SweetJustice for SweetCakes.