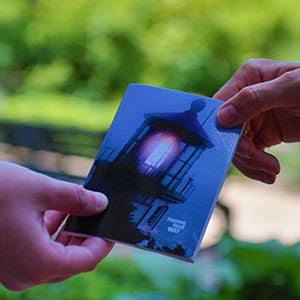 Public gathering spaces – like parks - have always been a place where diverse communities can come together to freely discuss and exchange ideas. That’s what Gail Blair, blind since the age of 37, thought when she began having conversations about her faith in Wilcox Park, a public park in her hometown of Westerly, Rhode Island, adjacent to the Westerly Public Library. Much to her surprise, the Memorial and Library Association, the organization that manages the public park and library, contacted the police and asked them to ban her from the grounds—under pain of arrest, should she trespass—for two years. First Liberty filed a charge of discrimination with the Rhode Island Human Rights Commission alleging the Memorial and Library Association is violating the law by engaging in religious and disability discrimination.

Gail Blair is a woman whose only crime is a love for talking with people and walking in the park. Since 1983, she has lived in the small town of Westerly, Rhode Island, where she spent most of her career as a registered nurse, including as a Nurse Clinician at Johns Hopkins. As a young woman, Gail was diagnosed with a rare genetic disorder that gradually caused her to lose her vision.

But as her world went dark, she saw a new light of purpose on her life. “As my vision faded, I came to see more clearly that we are born again through Jesus Christ, the Son of God,” Gail said. No longer able to work as a nurse, she resolved to continue helping others by gently sharing her faith with the local community. “In the beginning of my career, I provided medical care as a nurse. But now I care for others in what I feel is an even more important sense, by bringing the good news of the Gospel to others so they can have eternal life.” During her strolls in Wilcox Park, she would carry pocket copies of the Gospel of John, offering them to the people she met.

She never expected to be told that her conversations about faith were banned in Wilcox Park, and worse, that she would, in front of the police, be banned from accessing the public park and library for having them.

Park officials never seemed comfortable with Gail striking up conversations about her faith and handing park goers religious material, even though they didn’t mind others having conversations in the park, hosting plays while passing out handbills, or handing out materials for other events. Park officials specifically targeted Gail for her religious conversations and materials. They even claimed that Gail—over the age of 60 and blind—accosted people in the park in an effort to force them to talk to her.
On June 24, 2019, park officials contacted the police, asking them to bar her from stepping foot in either the park or the library for two years. Sighted persons are free to cross into Wilcox Park and have conversations with anyone they meet, but park officials called the police and threatened to arrest a blind woman for having conversations with others about Jesus in their park.

A public records request to the Westerly Police Department revealed that Gail is the only person to have ever been issued a trespass notice for talking about Jesus and distributing written materials in Wilcox Park.

In June 2020, with assistance from First Liberty Institute and William Wray Jr., an attorney at Adler Pollock & Sheehan P.C., filed a charge of discrimination with the Rhode Island Commission for Human Rights against the Memorial and Library Association. The charge alleges that the Association’s actions violated Rhode Island’s laws for places of public accommodation and were discriminatory on the basis of religion and disability.

“Banning a blind woman from entering a public park simply because she offers people she meets religious material is outrageous and discriminatory,” said Jeremy Dys, Special Counsel for Litigation and Communications at First Liberty Institute. “No government entity should ban anyone—let alone a gentle, blind woman— for simply carrying on conversations about her faith and giving them a copy of the Gospel of John in a public park.”

Providence, RI—First Liberty Institute and William Wray Jr., an attorney at Adler Pollock & Sheehan P.C., today filed a charge of discrimination with the Rhode Island Commission for Human Rights against Westerly, Rhode Island’s Memorial and Library Association for banning a blind woman from Wilcox Park and Westerly Public Library in Westerly, Rhode Island.  Park officials demanded that Gail Blair, who was 63-years old, at the time, and blind, stop having conversations with others in the public park about Jesus in which she would offer them a small copy of the Gospel of John.  As a result, park officials banned Mrs. Blair from their park and library.  Park officials then called on the local police to issue a formal “Trespass Warning” to Mrs. Blair, threatening to arrest her if she enters the park or library within a period of two years.

You can read the charge of discrimination here.

“Banning a blind woman from entering a public park simply because she offers people she meets religious material is outrageous and discriminatory,” said Jeremy Dys, Special Counsel for Litigation and Communications at First Liberty Institute. “No government entity should ban anyone—let alone a gentle, blind woman— for simply carrying on conversations about her faith and giving them a copy of the Gospel of John in a public park.”

He added that, “Talking about your faith to people in a public park should never be a crime. Gail Blair simply wants the same rights as everyone else, to be free to talk to people about issues she cares about in a public park.”

On June 24, 2019, Association staff contacted law enforcement to report that Mrs. Blair was “stopping patrons and giving them religious pamphlets.”  They claimed that Mrs. Blair had “accost[ed]” park and library patrons and that she gave out “pamphlets which patrons end up discarding in the park.”  A short time later, after volunteering to assist her church’s Vacation Bible School event in the park, the Westerly Police Department informed her that she had trespassed, warning her that any future violations would result in her being placed under arrest.

As the charge of discrimination says, “The Police Department searched for all incidents that involved complaints or trespass notices issued to anyone for distributing information, pamphlets, soliciting, selling, hawking, etc., and found none apart from when the Association called the police to eject me from the park. My conduct did not violate the ‘Rules of Conduct’ posted by Westerly Library and Wilcox Park. Nor did it violate any of the Park’s Guidelines.”