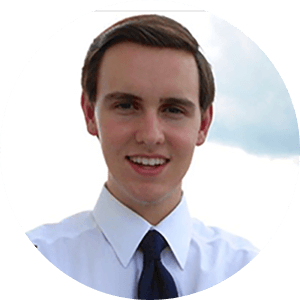 In 2014, Brooks Hamby, a devout Christian, was the salutatorian of his class at the Brawley Union School District in Brawley, California, and planned to explain how his religious faith contributed to his success as a student in his graduation speech. However, the school censored his graduation speech three times, told Brooks he could not reference his religious faith in his speech and threatened to shut off his microphone if he included religious references. Intimidated by the school’s threats, Brooks delivered a heavily edited version of his speech on graduation day. First Liberty represented Brooks and wrote a letter to the school district asking for a meeting, an apology, and assurances that such anti-religious censorship would not occur again. However, lawyers for the school district refused, claiming the school was right to censor the speech.

The censorship Brooks experienced made national headlines on June 16, 2014 in a Fox News article by Todd Starnes, in which Starnes reported that school officials at Brawley Union School District in Brawley, California told Brooks that he could not reference his religious faith in his graduation speech and turned back three versions of the speech. In the third version, an administrator even crossed out religious references in black.

On the Monday before graduation, Brooks was notified that he was the salutatorian and given until Wednesday to turn in the first draft of his speech. Brooks had written the first draft as a prayer, including the sentence: “Heavenly Father, in all times, let us always be kind to one another, tenderhearted, forgiving one another, as God in Christ has forgiven us.” After school officials rejected that version, he rewrote it and submitted a second draft which mentioned the censorship of the first draft of his speech. The school district also rejected the second version.

In a warning letter, Brooks was told: “The first and second draft speeches proposed oppose government case law and are a violation of the Constitution.” The letter also stated: “The district is advising you that reference to religious content is inappropriate and that the two drafts provided will not be allowed.”

On Thursday morning, the day of the graduation ceremony, Brooks and his parents were called to see the principal. The district issued the Hambys a notice that stated that if Brooks “interjects religious content, the sound will be cut off, and a disclaimer to the entire audience must be made explaining the district’s position.” After receiving this information, Brooks wrote a third draft, which he sent to the superintendent. He received that version back with all religious references crossed out in black.

Brooks sent the fourth version of his speech to school administrators, but did not receive a reply before it was time for him to deliver his address. In his speech he referenced the previous three versions and included references to the Bible and his Christian faith. The school did not silence his microphone but allowed him to finish.

Hiram Sasser, First Liberty’s Director of Litigation, told Starnes that even the first draft Brooks wrote of his speech was legal. Sasser said, “It is outrageous that a government school official would demand that a salutatorian submit his speech for government review for the purpose of censoring religious speech.” He also said, “Even in the Ninth Circuit, no government official may censor simple references to God that served as personal acknowledgment by Brooks of something greater than himself.”

On June 18, 2014, First Liberty sent a demand letter on behalf of Brooks to the Brawley Union School District. The letter requested a meeting with the superintendent before July 11, 2014 and asked the school district to apologize to Brooks and state that the district would not practice anti-religious censorship in the future.

“‘Nothing in the Constitution . . . prohibits any public school student from voluntarily praying at any time before, during, or after the school day.’ Santa Fe, 530 U.S. at 313. Yet prohibiting, or attempting to prohibit, Mr. Hamby from voluntarily engaging in religious speech is precisely what BUHS [Brawley Union High School] officials attempted to do.”

However, in a ten-page response letter dated July 10, 2014, lawyers from a large California law firm representing the school district refused all of First Liberty’s requests. The letter stated that “There is no legal authority that a student speaker—who serves as a school district’s authorized representative of student success in its ceremony—has a legal right to lead his classmates in prayer in his salutatory speech.”

The letter also claimed that “Mr. Hamby’s speech bore the imprint of the District” and said that “the District exercises control over the valedictory/salutatory speeches and only permits students to deliver content its administrators have deemed appropriate.”

First Liberty is dedicated to working to protecting the religious freedom of students—including graduation speakers—to freely express their faith without school censorship. To that end, First Liberty developed a free, downloadable resource called the Religious Liberty Protection Kit for Students and Teachers. This kit is a guide to religious freedom in America’s schools and includes information regarding religious content in graduation speeches. The kit educates students and teachers on their religious liberty rights and empowers them to defend their rights if they are violated.

BRAWLEY, CA, June 18, 2014—On Wednesday, Liberty Institute sent a demand letter to Brawley Union High School District officials on behalf of its client, salutatorian Brooks Hamby, whose written speech school officials repeatedly rejected claiming, “reference to religious content is inappropriate and…will not be allowed.” Although Hamby eventually delivered a fourth version of his speech at his graduation ceremony, for school officials to censor three different versions of his speech – and then threaten to turn off his microphone – just because he wanted to reference his faith is a serious First Amendment violation.

In the letter, Liberty Institute attorneys request to meet with the Superintendent before July 11 to resolve the religious discrimination issues against Hamby. Specifically, they seek a public statement from Brawley Union High School District exonerating Hamby of any wrongdoing, and a statement from Brawley Union High School District that such religious censorship will not occur in the future. To view an online copy of the demand letter, follow this link: http://libertyinstitute.org/hamby

“No student should be censored for simply talking about their faith,” said Liberty Institute Senior Counsel Jeremy Dys. “The US Supreme Court has made clear that students do not surrender their First Amendment rights at the schoolhouse gate – or the graduation ceremony.”

After school officials rejected two drafts of Hamby’s graduation speech for what they considered unconstitutional and inappropriate religious references, Hamby received his third draft with all references to God, faith, and the Bible blacked out. Despite three rejections and the threat to have his microphone turned off, Hamby presented a fourth version of his speech at the graduation ceremony. Hamby’s speech contained nothing that could be considered obscene or proselytizing, but instead reflected his personal story of inspiration and faith as an integral part of his life.

Liberty Institute is a national nonprofit legal group dedicated to defending and restoring religious liberty across America — in our schools, for our churches, inside our military and throughout the public arena. Liberty’s vision is to reestablish religious liberty in accordance with the principles of our Founding Fathers. For information, visit www.LibertyInstitute.org.