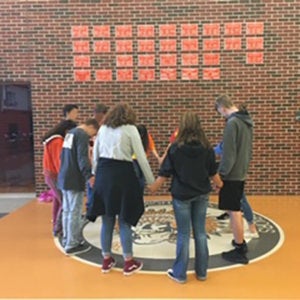 Hannah and a group of her classmates decided to pray during lunch for one of their former classmates who had recently been in an accident. After initially telling the students, “Y’all don’t do that again,” Principal Lee Frost, told Hannah and her friends they could only pray on the stage behind the curtain, outside of the school building, or in the gym while no one was present. In other words, the students were told that they could not pray in view of the other students. Attorneys from First Liberty informed the school district of the Constitutional rights of Hannah and her friends and requested a clarification of the school’s policy. Soon after, school officials corrected their policy. Students, including Hannah, are now allowed to pray publicly.

“Students should not have to hide or be exiled to pray for each other,” said Keisha Russell, Associate Counsel for First Liberty Institute.” Russell continued, “School officials need to remember that students don’t lose their First Amendment rights at the school house gate. We’re hoping this issue can be resolved quickly and easily.”

Hannah Allen is an eighth-grade student at Honey Grove Middle School in Honey Grove, TX. In early September 2018, Hannah and a group of other students decided to pray for one of their former classmates who had recently been in an accident. During lunch when students are permitted to talk and move around the cafeteria, the students walked to an empty table, held hands, and quietly prayed with one another. Almost immediately after, Principal Lee Frost, walked over to the students and told them in response to the student-initiated, student-led prayer, “ya’ll don’t do that again.”

The next day Principal Frost told Hannah and the group of students that they could only pray if they went on the cafeteria’s stage behind the curtain, outside of the school building, or in the gym while no one was present. In other words, the students were told that they could not pray in view of the other students. Currently, Hannah and her friends are continuing to pray every day at lunch either in the gym, if no one is in it, or outside, if the weather permits.

Soon after receiving correspondence from First Liberty, school officials corrected their policy and students, including Hannah, are now allowed to pray in front of other students as long as it is not disruptive of normal school activities. 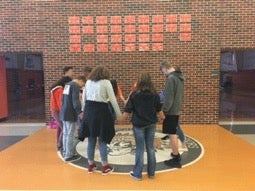 North Texas School Officials Reverse Policy that Denied Students’ Right to Pray During Lunch
Middle school students had been told to go behind curtain, outside, or in empty gym during lunch to pray for their fellow classmates and teachers

Honey Grove, TX—After receiving a letter from First Liberty Institute, Honey Grove (TX) Independent School District officials reversed a decision that forced students praying together to hide behind a cafeteria curtain, move to an empty gym, or relocate outside to pray.

“We are grateful to Honey Grove school district officials for acting swiftly to ensure that students can freely exercise their right to pray,” said Keisha Russell, Associate Counsel for First Liberty Institute. “Students are free to pray together at school as long as it’s not disruptive. Our client is very pleased that she and her friends can continue to pray together for each other, their fellow classmates, and their teachers.”

In early September, Hannah Allen and a group of other students at Honey Grove Middle School prayed together during lunch for one of their former classmates who had recently been in an accident.  Their principal told them they needed to stop.  No school officials were involved with the prayers.  When Hannah and her friends decided to continue their prayers during lunch the next day, the principal told them they had to move behind a curtain in the cafeteria, remove themselves to the gym, or meet alone outside.

In its letter to school officials, First Liberty explained that student led prayer during non-instructional periods of the school day is squarely protected by the U.S. Constitution and offered to assist the District to conform the school’s policies on student religious expression to the guidelines established by the U.S. Department of Education on the subject.

“During a time of so much conflict in schools, it’s good when students come together to support their fellow classmates, including praying for each other,” added Russell.  “We trust the school district will continue to conform to the law and ensure that the students’ right to pray is protected.”