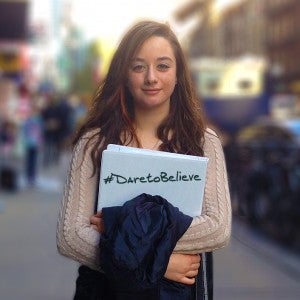 She Didn’t Take “No” for an Answer

When Liz presented her four-page proposal to start her “Dare to Believe” Christian club to her high school principal, she was told “no” because it was a Christian club. But that didn’t stop her. To Liz, this was a serious matter, and in her proposal she shared her objective to reach out to her community by visiting nursing homes and holding toy and food drives.

Liz also wrote about her plan to share with her fellow teenagers that “love is louder than depression, self-harm, pressure, bullying, school, home life, addiction”—and other problems or struggles in their lives. Liz pointed to the impact that biblical principles made in her life and what she knew they could do for others. Liz explained:

“Life appeared to me as something not worth having or living. Maybe, right now, teenagers are feeling the same way I did, and saying that life has nothing for them and that no one would care if they lived or died. Through ‘Dare to Believe’ Christian Club I want students to know that while they’re going through these tough times (depression, parents divorce, self-harm, suicide, anxiety, bullying, etc.), Jesus Christ offers them another view of life; a life that is truly beautiful.”

Liz was hopeful that her Christian club would receive the full recognition and benefits afforded to other approved extracurricular clubs at Wantagh High School, including the Key Club, Variation Club, W.A.R.R. (Wantagh Animal Rights and Recycling), and Rube Goldberg. All of the high school’s more than 30 extracurricular clubs were allowed to make announcements, hang posters, use school facilities, and have a faculty advisor. But not Liz. Because her club was religious, her principal refused to provide her club recognition.

DAY 1:  On behalf of Liz Loverde, First Liberty delivered a demand letter to the high school principal and two other Wantagh Union Free School District officials, demanding they reconsider their denial of Liz’s proposal to start her “Dare to Believe” Christian club at Wantagh High School in Long Island, New York. First Liberty also demanded the school district approve Liz’s proposal, and grant official recognition to her club, Dare to Believe, in one week’s time. Along with Jeremy Dys, Liz also spoke at a press conference on Monday afternoon, where she testified: “Wantagh High School has over 30 clubs, and they wouldn’t recognize mine because it was faith-based.”

DAY 3:  First Liberty’s #DaretoBelieve campaign quickly spread the word about Liz Loverde. The campaign encouraged everyone to sign the #DaretoBelieve Petition, sending a message to the U.S. Department of Education demanding they stop ignoring the many violations of religious freedom protections afforded to public school students like Liz in The Equal Access Act of 1984.

DAY 4:  At a Wantagh Union Free School District meeting, school officials discussed whether or not they would approve the Christian club, Dare to Believe, for the 2014-15 school year.

DAY 6:  First Liberty client John Raney and his fellow members in the Students United in Faith club at Ward Melville High School in East Setauket, New York, sent their encouragement to Liz—and the students who want to form the Dare to Believe club—in a special video message.

DAY 7:  The #DaretoBelieve campaign was well on its way to reaching approximately 35,000 people via Twitter, seeing more than 51,000 impressions on Facebook, as well as garnering nearly 7,000 unique viewers on First Liberty’s website. More than one hundred friends—including fellow high school students—showed their grassroots support for Liz and her Christian club by sharing images of their handmade #DaretoBelieve posters on Instagram.

DAY 8:  First Liberty was notified that the school district recognized the Dare to Believe club for the 2014-15 school year.