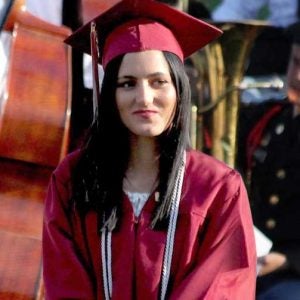 Moriah Bridges was a graduating high school student in Beaver, Pennsylvania, who was asked by the senior class president to give remarks at their graduation ceremony on June 2, 2017. Moriah prepared her remarks, but was then forced to “edit” her comments, removing any faith-based content after receiving an email from the school superintendent explaining that her remarks could not be religious and, “most certainly may not recite a prayer that excludes other religions.” On June 13, 2017, First Liberty Institute sent a letter to the school district on Moriah’s behalf explaining the law, requesting that the school admit its actions were wrong, and asking to set up a meeting with First Liberty attorneys to help facilitate a way to protect the religious expression of students in the future.

Moriah Bridges was a graduating senior at Beaver High School in Beaver, Pennsylvania. She was asked by the 2017 senior class president to give remarks at the graduation ceremony’s “closing exercise.”

Moriah is a Christian who wrote her remarks in a way that would both express her best wishes for her classmates and, as First Liberty’s letter on her behalf stated, draw upon “the faith that is central to her identity as a Christian.”

Student Told “We Have to Edit” Personal Graduation Remarks

Moriah submitted her remarks to school officials for review prior to the graduation ceremony.  The next day, she received an email from the principal conveying a message from the superintendent of Beaver Area School District, who mischaracterized the nature of Moriah’s remarks as school-sponsored, student initiated prayer in violation of the First Amendment.

The superintendent said that her submitted remarks were “not permissible by federal law,” even if those remarks were private, student speech.

The ceremony contains two instances of invocation/prayer/benediction; this is not permissible by federal law, as prayer (even student-initiated prayer) has been held to be unconstitutional by the Supreme Court as a violation of the Establishment Clause.

The selected students may still address their class and indicate the things that they wish/hope for their class, but they may not do it in the style of a prayer and most certainly may not recite a prayer that excludes other religions (by ending “in the name of Our Lord and Savior, Jesus Christ” or “in the matchless name of Jesus”).

“I was shocked that the school said my personal remarks broke the law and saddened that I could not draw upon my Christian identity to express my best wishes for my classmates on what should’ve been the happiest day of high school,” said Moriah.

Moriah was forced to choose between removing religious content from her remarks or giving up her speaking slot at the graduation ceremony. While her words had been crafted to express her best wishes for her classmates, she no longer had the freedom to mention anything religious.

On June 13, 2017, First Liberty sent a letter to Beaver Area School District educating the school with the law and proposing a meeting with the superintendent to protect future students. Read the letter.

First Liberty’s letter stated, “In short, school officials—in violation of the First Amendment—forced Moriah to censor her personal remarks during the closing exercise of her commencement ceremony merely because of the religious viewpoint of her remarks.”First Liberty attorney Jeremy Dys pointed out that Moriah’s words were her own “private speech, not government speech,” and as such, could not violate the Establishment Clause. Instead, private, religious student speech like Moriah’s “is entitled to full First Amendment protection.”

While the damage has already been done to Moriah, she is hopeful that First Liberty’s letter protects students who may face a similar dilemma in the future.  “I hope the school district will realize their mistake and make sure future students never have to go through this again,” she says.

First Liberty’s letter cited a number of legal precedents, including the landmark Supreme Court case Tinker v. Des Moines Independent Community School District (1969), which held that students do not “shed their constitutional rights to freedom of speech or expression at the schoolhouse gate.”

It also cited guidance from the U.S. Department of Education (DOE) on student graduation speakers:

Where students or other private graduation speakers are selected on the basis of genuinely neutral, evenhanded criteria and retain primary control over the content of their expression, however, that expression is not attributable to the school and therefore may not be restricted because of its religious (or anti-religious) content. To avoid any mistaken perception that a school endorses student or other private speech that is not in fact attributable to the school, school officials may make appropriate, neutral disclaimers to clarify that such speech (whether religious or nonreligious) is the speaker’s and not the school’s.

The practice of school district officials editing, controlling, and censoring student speech because of its religious viewpoint is unconstitutional. First Liberty requested a written statement from the school that its actions toward Moriah were wrong and would not occur toward other students in the future.

“School officials should remember that students retain their constitutional rights to freedom of expression from the schoolhouse gates, all the way through the graduation ceremony,” says Jeremy Dys.

BEAVER, PA, November 30, 2017—Almost six months after First Liberty Institute sent a letter to the Beaver Area School District (BASD) regarding the district’s religious censorship of high school senior Moriah Bridge’s graduation remarks, BASD has changed course. BASD has enacted a new policy explicitly stating the expressions of students and/or other private speakers at future graduation ceremonies “shall not be restricted because of religious, anti-religious, or non-religious content.”

“Students retain their constitutional rights to freedom of expression from the schoolhouse gates, all the way through the graduation ceremony.,” said Jeremy Dys, Deputy General Counsel for First Liberty. “By adopting this new policy, the BASD is taking the important step of protecting future students who wish to reference their religious beliefs in a personal speech to their classmates.”

In addition to the new policy, the superintendent of BASD apologized to Moriah for the lack of clarity under the previous policy. The action by the BASD comes soon after a meeting between Moriah, members of the BASD, and First Liberty Institute attorneys.

Read more about this case at FirstLiberty.org/Bridges.

Jeremy Dys on One America News