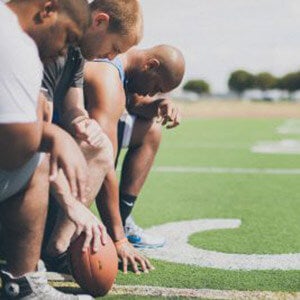 In April 2016, First Liberty Institute met with the General Counsel of Oklahoma State University (OSU) to reverse the university official’s action that banned religious ministry Oklahomans United for Life from all OSU campuses. OSU officials had previously kicked the ministry off campus and threatened arrest to ministry members if they returned. The issue was resolved amicably a short time later in the meeting with OSU’s General Counsel. First Liberty attorneys praised OSU for reaching a timely resolution and demonstrating its commitment to religious freedom on its campuses.

Oklahomans United for Life is a faith-based ministry of Fairview Baptist Church in Edmond, Oklahoma.

“We like to go on the college campuses and engage students and talk about the issue of life,” he said.

Blair is also an alumnus of Oklahoma State University (OSU), where he starred as an offensive tackle for the OSU Cowboys. Blair later played in the NFL for the Chicago Bears.

In March 2016, Oklahomans United for Life sought to conduct an outreach event at the OSU-Oklahoma City campus. After the ministry attempted to follow university procedure by renting a table and reserving a space for the event, they were told all tables were sold out. When the ministry’s director asked permission to simply “walk around campus with a clipboard” and “engage in free speech,” he was referred to campus security who instructed the group to leave. In addition, the director was warned that if the ministry returned, they would be arrested for being on campus without approval.

The OSU administration responded favorably by agreeing to meet with First Liberty attorneys. The meeting was held on April 29, 2016, and the issue was promptly resolved.

First Liberty Senior Counsel Mike Berry commends OSU for setting a positive example of how organizations should respond when they realize their actions have infringed on an individual’s First Amendment right to freely exercise their faith.

“As soon as we alerted OSU’s General Counsel that they were violating the religious liberty rights of Paul’s pro-life ministry, they were willing to work with us to set everything right,” Berry said.

Berry added that this is not the first time First Liberty has successfully worked to resolve a religious freedom violation without the issue escalating into a lawsuit.

“Our legal matters don’t always make national headlines or end up in federal court,” he said. “At First Liberty, a lot of the work we do is behind-the-scenes. Often all it takes is a friendly conversation with the government official to make them aware of the law, and the issue can be easily resolved.”

University officials now welcome Oklahomans United for Life, and the other ministries that operate under Fairview Baptist Church, on all OSU campuses.