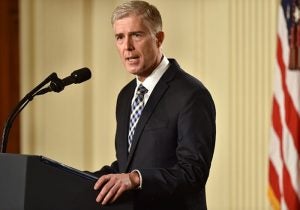 Some of the most notable religious freedom opinions Judge Gorsuch wrote or signed as a judge on the Tenth Circuit Court of Appeals include:

Judge Gorsuch joined an opinion supporting the right of cities to choose which monuments to display. He disagreed with the majority’s decision not to review a case that required the government to display the Seven Aphorisms of Summum if it displayed a Ten Commandments monument. The dissent joined by Gorsuch argued that the government must be free to “make reasonable, content-based judgments regarding whether to allow the erection of privately-donated monuments in their parks.”

Judge Gorsuch wrote a dissent in support of a cross memorial dedicated to fallen state troopers. He disagreed with the majority’s decision not to review a case that misapplied the “reasonable observer” test. His opinion explains the problems that such misapplications cause in Establishment Clause cases. Gorsuch’s dissent also argues that erecting cross memorials does not “establish a religion or coerce anyone to participate in any religious exercise.”

Judge Gorsuch wrote an opinion in support of a Ten Commandments display. He disagreed with the majority’s decision not to review the case, arguing that the decision below misapplied Supreme Court precedent to strike down the display.

In a concurring opinion supporting Hobby Lobby, Judge Gorsuch wrote that the Green family should not lose their individual religious rights merely because they run a company. The opinion also stated that the Religious Freedom Restoration Act protects even “unpopular religious beliefs,” and vindicates “this nation’s long-held aspiration to serve as a refuge of religious tolerance.”

Judge Gorsuch joined an opinion in support of the First Amendment rights of the Little Sisters of the Poor, a group of Roman Catholic nuns dedicated to serving the elderly. He disagreed with the majority’s decision not to review their case. He would hold that whenever the government imposes a significant penalty for refusing to do something prohibited by a person’s sincere religious beliefs, the government is substantially burdening that person’s religious beliefs.

A series on Gorsuch’s jurisprudence and views on various legal topics –including civil rights, abortion, religion, class actions, First Amendment jurisprudence – and how these might compare with Justice Scalia’s.

A detailed overview of Gorsuch’s personal life and legal career.

The American Bar Association’s Standing Committee on the Federal Judiciary rated Gorsuch “Well Qualified,” which is the highest rating they give.

Statements of praise for Gorsuch from a wide variety of judges, editorial boards, political leaders, and interest groups.

“Gorsuch is an eminently qualified and well-respected judge with a record that demonstrates he cares about religious liberty, the separation of powers, and the original public meaning of the Constitution and the laws he interprets. He would be a fine successor to Scalia.”

“Judge Gorsuch’s embrace of originalism is a bulwark for our Second Amendment rights.”

“[Gorsuch is] a textualist and an originalist…in the vein of Antonin Scalia.”