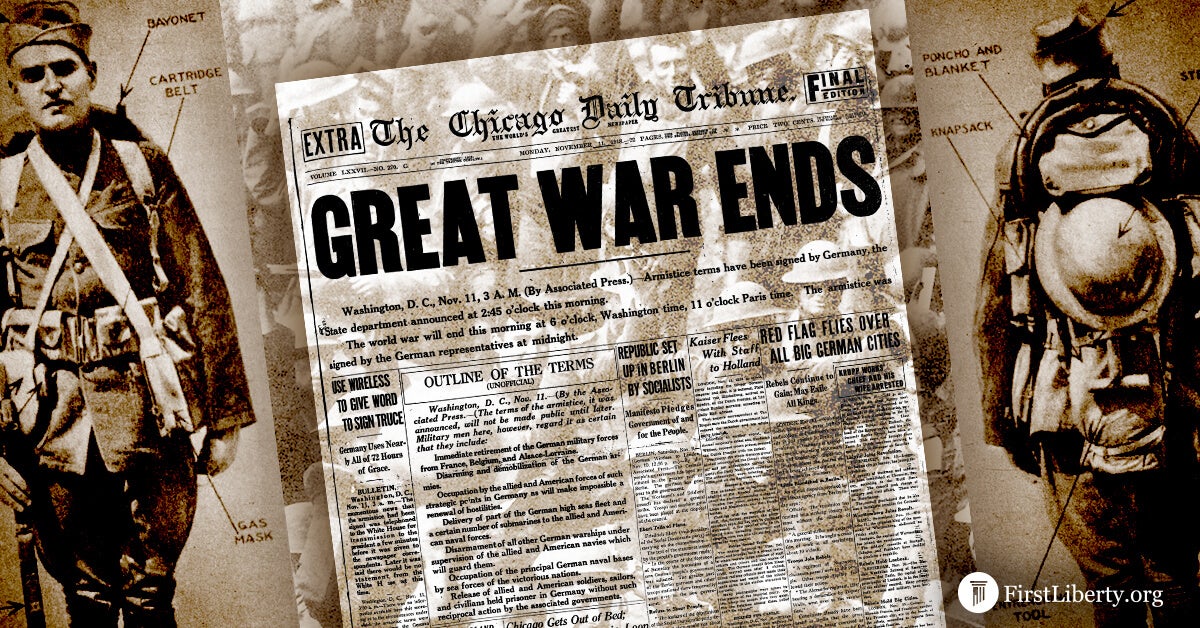 This upcoming Sunday, Americans will celebrate Veterans Day – a historic American holiday where we take time to commemorate our nation’s service members, who made the ultimate sacrifice in defense of our freedoms.

What’s more, this year’s Veterans Day will also mark the 100th anniversary of Armistice Day, when the Allies of World War I signed the armistice that brought an end to the “Great War to End All Wars.”

On November 11, 1918, the Allies and Germany closed one of the most gruesome and bloody chapters in history. It was on that day – at 11 o’clock in the morning, on the 11th hour of the 11th day of the 11th month – that hostilities ceased and peace finally reigned.

But peace came at a price – much of which was paid with the lives of American soldiers, who left everything behind to fight overseas for the great cause of freedom.

In fact, 49 of those brave heroes who sailed abroad and never returned home were from Prince George’s County, MD – and their memory is forever embodied and alive with us through the Bladensburg WWI Veterans Memorial.

Because of their immeasurable sacrifice, peace prevailed 100 years ago on Armistice Day.

Yet right now, a battle still rages, as a group of humanists seek to bulldoze and desecrate the Bladensburg Peace Cross.

And so we ask: Will there be peace for the Peace Cross?

As long as our attorneys have a say, we will do what it takes to ensure the Peace Cross remains, especially now that the U.S. Supreme Court has agreed to hear the case. Our commitment to American veterans and to our nation’s fallen heroes is this: “It is NOT coming down!”

As Veterans Day approaches, First Liberty attorneys and staff want to let you know that we are forever grateful to our veterans for their service – and we will never forget your sacrifice:

“The most powerful weapon in the world is not a tank, a stealth bomber or even an aircraft carrier. It is the American service member, who answers the call to serve and to sacrifice. As a combat veteran, I’ve had the honor of serving with men and women who would not hesitate to go into harm’s way—even to pay the ultimate sacrifice—in order to protect this nation we so dearly love. And the greatest tribute we can pay to those who run to the sounds of danger is to remember them well. As warriors grow old, our bodies may break and our wounds may become scar-tissue. We don’t fight for gold or for glory. All we ask is that the legacy of selfless service and sacrifice not die with us. Remembering that legacy ensures America will always have the most powerful weapon on earth.”

“My family holds dear a rich tradition of citizen soldiers – Americans who fought tyranny wherever it was to be found. I wanted to be like them and to live at the tip of the sword. I simply wanted to defend the nation’s honor, so I didn’t do it for money or medals, but to know that I had done my part. I once visited Dachau and that reinforced my instincts that it is always righteous to fight for freedom. I am but one of millions that made that decision and would do it a million times over again.”

“Today, to keep us safe, U.S. Navy Sailors on ships, on submarines, in squadrons, and in special warfare units in all corners of the globe will spend yet another day in harm’s way, separated from everything and everyone they know and love. After a full day, they will stay up through the night keeping watch over us while we sleep. And they will do it again tomorrow. That is devotion.”