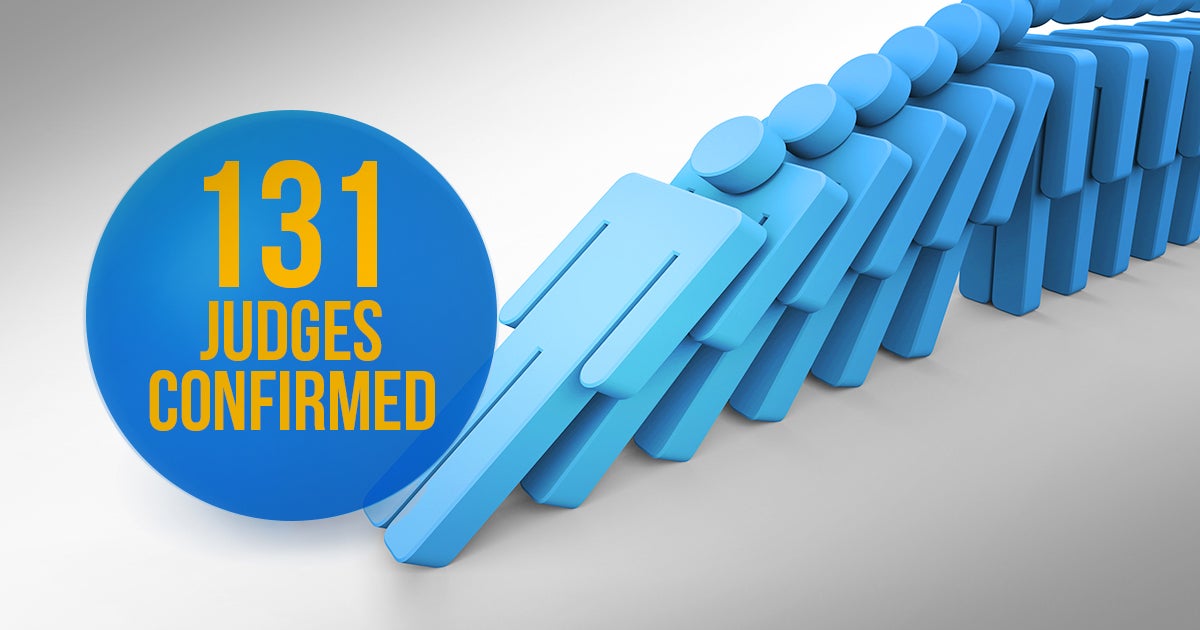 Right now, America is on a winning streak when it comes to judicial confirmations.

As you know, during this historic year for religious liberty, there’s already been a string of key victories on the nomination front, with a record 43 of the President’s nominees being confirmed to the Circuit Courts of Appeal.

Many of those confirmed judges have proven to be staunch defenders of the Constitution, interpreting and applying it according to its original text and intent – and that means they are going to be protectors of our first freedom, and our right to live out our faith.

What you may not realize at first is that we’re witnessing history-making momentum in the number of judges that are taking a seat on the federal bench. In fact, over the past week, the U.S. Senate and the President’s administration achieved several important milestones that are making this summer a turning point.

Here’s a brief recap of three significant developments that will mark a new chapter in the judicial confirmation process.

Over the past week, the U.S. Senate confirmed six more judges to the federal bench, including two circuit level judges and four district court judges. This short wave of confirmations brings the total number of the President’s appointed judges to 131.

Interestingly, the six judges confirmed over the last week reduced the total number of vacancies from 133 down to 128. Think about it this way: there are now 131 confirmed judges, compared to 128 federal seats that still remain vacant.

For the first time in this administration, there are more confirmations than vacancies.

As you can imagine, this is an important milestone for the President and his administration, who’ve been committed to nominating principled, constitutional conservatives to America’s courts. And now, they’ve more than surpassed the work they originally inherited from the previous presidential administration. To refresh your memory, the President and his team had the daunting task of filling 108 seats when they first assumed office.

Why is this development so critical?

Moving forward, it is very likely that the number of confirmations will probably continue to exceed the total number of judicial vacancies. Indeed, this is a tipping point in the nomination battle, especially because we can expect to see less and less vacancies at the same time that we’ll see more and more excellent judges entering the federal judiciary. 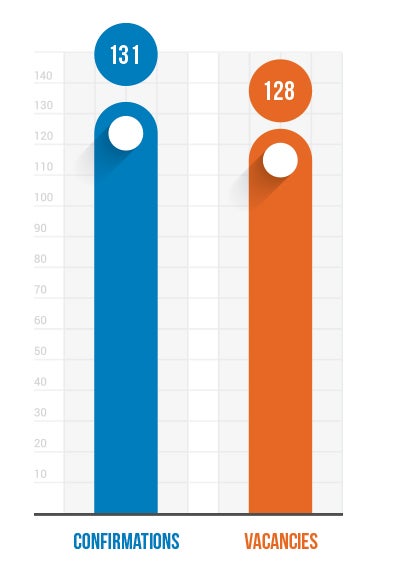 A “Circuit Flip” Looms Near: A New Vacancy Created in the Second Circuit

Late last month, a judge appointed under the Obama administration took senior status, creating an important vacancy that could flip the U.S. Court of Appeals for the Second Circuit to have a majority of conservative-appointed judges.

Right now there are two vacancies on the Second Circuit: (1) in May a vacancy was created when a judge appointed under the Bush Sr.-administration took senior status; and (2) in June, the most recent Obama-administration appointee created a second vacancy.

This means that the President now has the opportunity to put forth two nominees. If the Senate confirms them both, it would bring the conservative-to-liberal majority in that circuit to 7-6, respectively. In short, the President would flip a second appeals court.

Remember, our legal team is presently litigating a case within the jurisdiction of the Second Circuit. We are fighting a district court battle to protect the rights of the Orthodox Jewish community in Airmont, NY because city officials refuse to grant them approval to host religious gatherings in their private homes. If the district court doesn’t vindicate their rights, the case will likely be appealed to the Second Circuit, and the composition of that appellate court would have a profound effect on the rights of religious minorities.

With a 7th Nominee Confirmed, Margins Improve in the Liberal Ninth Circuit

Last week, the U.S. Senate confirmed Daniel Bress to the U.S. Court of Appeals for the Ninth Circuit, making him the seventh judge during this administration to fill a seat in that circuit.

With Judge Bress now on the bench, there is still one vacancy that the President could fill in this circuit. If that nominee is confirmed, it would further improve the margin to 16-13, liberal-to-conservative.

Consider how tight this margin really is. It would only take two circuit court judge retirements and subsequent confirmations in this circuit for the President to tip the scale from majority liberal-appointed judges to majority conservative-appointed judges. Think about the fact that there’s been 42 Circuit Court judges confirmed during the current administration, seven of them at the Ninth Circuit.

Is a flip possible in the liberal-judge stronghold that is the Ninth Circuit?

Yes, especially when you take into account the eight liberal-appointed judges who are eligible to retire. That’s the game-changer for this circuit. If two of those choose to retire from the bench, then it would be enough for the current administration to fill the vacancies and flip the Ninth Circuit.