This week, the U.S. Supreme Court began considering which cases it will hear in this year’s term, which officially begins this upcoming Monday, October 4. Currently, there are multiple cases with vast implications for religious freedom.

Here’s a rundown of Supreme Court cases to keep on your radar in the coming months, including three of First Liberty’s cases.

After more than six years of fighting for Coach Joe Kennedy’s right to kneel on the football field in silent prayer after games, First Liberty recently petitioned the Supreme Court to hear his case for the second time.

Though the Court declined to hear Coach’s case in 2019, four justices gave us good reason to hope the Court could hear it in the future. That’s especially good news since it only takes four justices to determine whether the Court will hear a case.

If the Court takes Kennedy’s case this time, it will have the chance to review—and possibly overturn—Employment v. Smith, something several justices previously signaled they might be interested in doing. Decided in the 1990s, Smith has significantly hampered Americans’ ability to enjoy protection under the Free Exercise clause of the First Amendment.

After a shocking ruling from the Ninth Circuit, our legal team believes Coach Kennedy’s case is in prime position for the justices to consider. By securing a victory for Coach, First Liberty could also help set a major new precedent to protect the constitutional rights of millions of Americans. 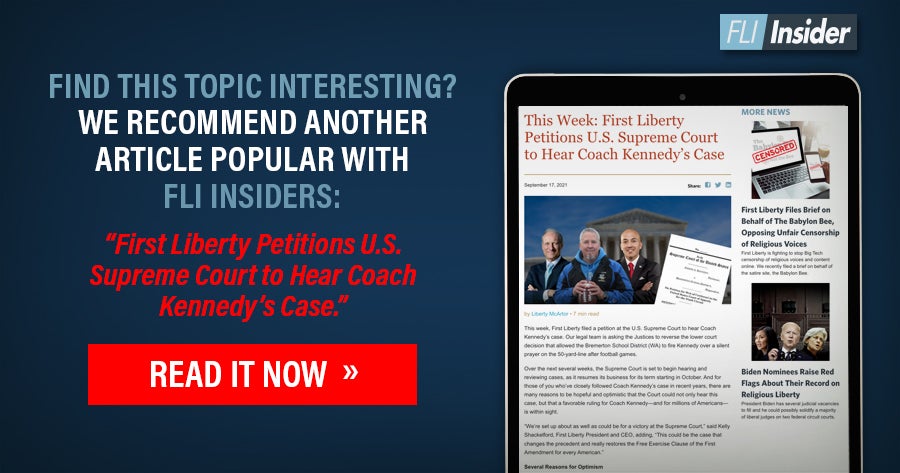 2. The Right of Parents to Send Their Children to a Religious School

The Supreme Court has agreed to hear a case challenging a Maine law that bans families from participating in a student-aid program if they choose to send their children to religious schools.

The Institute for Justice (IJ), along with First Liberty as co-counsel, represents parents who were denied using the student-aid program to send their children to religious schools. Our argument at the Supreme Court has been set for December 8th.

As IJ and First Liberty argue, it is unconstitutional for the state to deny families government aid just because they choose to attend a faith-based school. And thanks to previous decisions that have favored the constitutional rights of students and religious schools, there are ample reasons to be hopeful the Court will agree.

3. Are Churches Free to Determine Their Own Ministers?

First Liberty has asked the Supreme Court to reverse a municipal court decision that denied tax-exempt status to a Virginia church.

The case began when the City of Fredericksburg denied a parsonage tax exemption to New Life in Christ Church. According to city officials, a married couple who work as college ministers and live in a house provided by the church do not qualify as “ministers”—even though the church itself has appointed them as such.

In recent cases, America’s highest court has issued a number of favorable decisions upholding the constitutionally protected independence of religious organizations. With the New Life in Christ Church case, the Supreme Court has yet another opportunity to strengthen that protection and make it clear that government may not interfere with the affairs of religious organizations and houses of worship.

Other Key Cases to Watch

First Liberty filed a friend-of-the court (amicus) brief at the Supreme Court supporting the Seattle Union Gospel Mission, a Christian homeless ministry represented by the Alliance Defending Freedom (ADF). At issue: whether faith-based ministries can hire employees that uphold the religious beliefs of the organization.

Another key case the Court agreed to hear challenges a Mississippi law that bans abortions when a heartbeat is detected, which can be as early as six weeks into pregnancy. The case is historically significant, as it presents the Court with the opportunity to review and possibly overturn Roe v. Wade. Depending on the outcome, the case could also trigger even louder cries for court-packing.

We witnessed a preview of that potential outcry last month after the Supreme Court declined to hear a challenge to Texas’ new Heartbeat Act. In response to that decision, several Democrats renewed their radical proposals to pack more justices on the Court.

Fortunately, there is ample reason to hope the Court’s decisions will strengthen that freedom. After all, religious freedom cases have had an eighty-one percent (81%) win rate in the last sixteen years according to recent research.

It’s a great time to be optimistic—and a great time to support First Liberty in this critical fight. Our legal team is bringing more cases to the Supreme Court than ever before, creating more opportunities to establish powerful precedents that favor the future of religious freedom in our country.

The only reason our attorneys can take these important cases all the way to the Supreme Court is because we have an army of patriotic supporters willing to stand up for religious liberty. Will you join them today?