Findings help debunk “separation of church and state” and can point to the need to protect religious liberty in the public square. 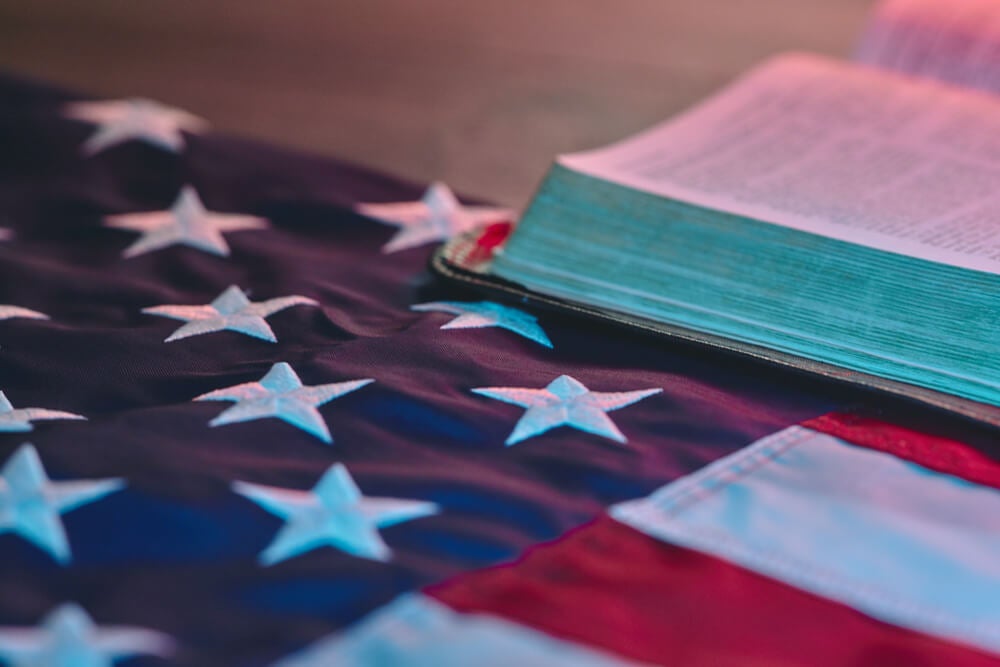 Despite America’s size and diversity, an analysis by Pew Research Center has found something that all 50 states have in common: a state constitution that contains one or more references to God or the divine.

Pew discovered that references to God or the divine occur almost 200 times among the various state constitutions, stated Pew copy editor Aleksandra Sandstrom in an article discussing Pew’s findings. Of the states, Massachusetts and North Carolina topped the list with the highest number of religious references.

According to Pew, 46 out of the 50 states mention the word “God,” with 34 of those states doing so at least twice.

The only states not to use the word “God,” Sandstrom noted, are Colorado, Iowa, Hawaii, and Washington. However, each of these states do include some sort of religious reference, whether it be “Supreme Being, “Supreme Ruler of the Universe,” or “Divine Guidance.”

The map below, included in Sandstrom’s article, shows the number of times each state constitution references God or the divine. 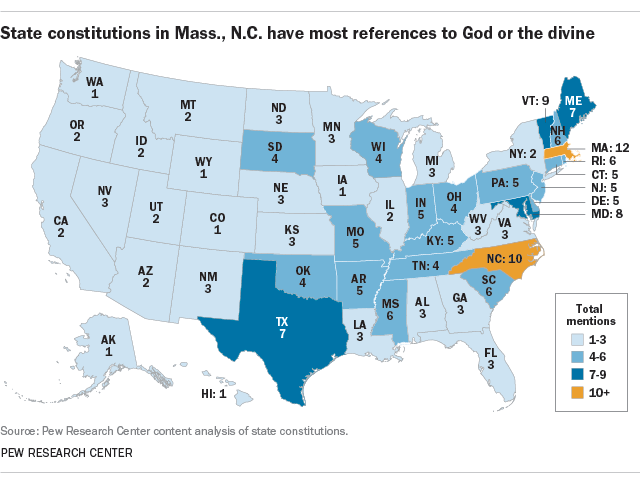 In addition, below is the total number of times, according to Sandstrom’s article, that Pew found each of the following words among the state constitutions:

BUT WAIT…WHAT ABOUT THE SEPARATION OF CHURCH AND STATE?

Some might wonder whether these religious references violate the “separation of church and state.” After all, references to God in state constitutions conflict with efforts of activist groups to do things like strike down legislative invocations, attack the national motto, and tear down veterans memorials and other monuments with traditional imagery.

But that’s because that sort of religious hostility was never mandated by the Constitution, which doesn’t even include the words “separation of church and state.” Instead, the Constitution guarantees that Congress will “make no law respecting an establishment of religion, or prohibiting the free exercise thereof.”

America’s founders generally welcomed religion in the public square. Even Thomas Jefferson—the writer of the letter from which the Supreme Court took the “wall of separation” phrase—attended religious services on public property. He also proposed a draft national seal that was religiously themed (with the word “God”), and, as President, allowed public property to be used for religious purposes.

The state constitutions’ mentions of God are also consistent with the Declaration of Independence, which itself includes four religious references: “Nature’s God,” the “Creator,” the “Supreme Judge of the world,” and “divine Providence.”

And despite the use of the word “God” and other words referencing divinity in their constitutions, all of the states have continued to advance and protect individual liberty for minority faiths.

DESPITE CONSTITUTIONS, STATES AND LOCALITIES OFTEN SUPPRESS FAITH IN THE PUBLIC SQUARE

Regardless of the Pew findings, some states and localities around the country sometimes practice religious discrimination or stifle their own citizens’ religious expression—therefore being inconsistent with their own governing documents.

For example, Pew found that the Maine Constitution mentions God or the divine seven times. However, an official at a Maine school invoked the “separation of church and state” in a memo banning school employee Toni Richardson from telling others she would pray for them while on school property.

The Texas Constitution also includes seven mentions God or the divine. But local school officials banned the Kountze, Texas, cheerleaders from writing Bible verses on run-through banners and students in Plano, Texas,  from giving out gifts with religious themes.

Florida refers to God or the divine three times. But two private Christian schools that made it to the Florida state high school football championship were banned from offering a pre-game prayer.

Georgia, one of the original 13 colonies, also mentions God or the divine three times. Yet the state fired public health expert Dr. Eric Walsh —before his first day on the job—for religious views he had expressed in church.

Oregon and Washington both mention God or the divine once in their constitutions. But the state of Oregon penalized Christian bakery owners for running their business according to their beliefs, and a school district in Washington fired football coach Joe Kennedy over his brief, silent postgame prayers. And the list could go on.

What the U.S. Constitution does mandate, however, is the “free exercise” of religion, and prohibits “abridging freedom of speech.” States and localities must protect freedom of religious expression in the public square. Only then will their actions be consistent with their own state constitutions.