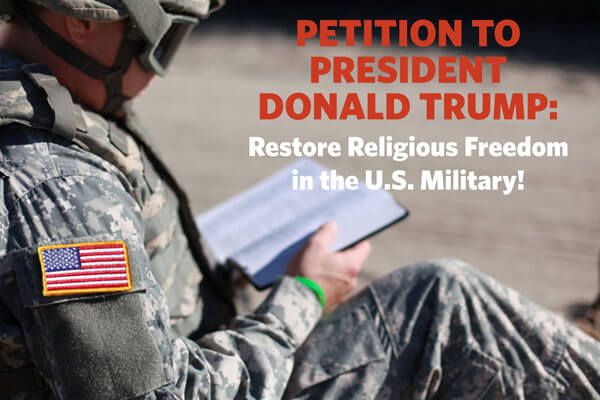 A First Liberty petition to President Donald Trump asks him to take strong action against “the continued pattern of hostility to religious freedom in the U.S. military.” It recommends removing officers who flagrantly suppress the religious rights of subordinates. Thousands of Americans have signed their names to the petition this month alone!

Action by President Trump to stop religious discrimination in the military would help fulfill Section 4 of his recent Executive Order on religious freedom, requiring federal agencies to respect religious liberty.

Despite the string of victories for First Liberty clients, elements within the U.S. military seem to remain committed to perpetuating the adverse environment for religious freedom that has existed for the past eight years.

“As we continue to use the legal system to fight for religious freedom on behalf of our service members, we believe Americans should have a way to express their viewpoint,” said Mike Berry, First Liberty’s Deputy General Counsel and director of its Military Affairs Division. “This is especially true in light of recent obstacles to progress.”

According to Berry, these obstacles include the following:

Kelly Shackelford, President and CEO of First Liberty, sent the petition to supporters, asking them to sign. As of the posting of this article, more than 3,000 First Liberty friends had already added their names.

“President Trump’s Executive Order reaffirms religious freedom in government agencies and authorizes enforcing First Amendment rights,” said Shackelford. “But now he must visibly apply that order to the military. The petition asks him to signal that the Commander-in-Chief intends to end the discrimination against people of faith in the U.S. Military.”

The Petition of President Donald Trump specifically cites the case of Air Force flight surgeon Col. Michael A. Madrid as an example of the need for action.

In 2013, a discredited fellow officer—who was court-martialed for serious offenses—made false accusations against Colonel Madrid based on misrepresentations of Col. Madrid’s Christian faith.

Col. Madrid was then promoted and given the Meritorious Service Medal for his “singularly distinctive accomplishments!” Col. Madrid says that as a flight surgeon, “It’s my job to make sure the Air Force’s airmen are in top condition. It’s been an honor to serve my country for two decades.”

But then came the witch-hunt.

Maj. Gen. McCoy slapped Col. Madrid with a “Letter of Admonishment” that could devastate and even end Col. Madrid’s fine career. McCoy has since transferred to another assignment, but the Air Force refuses to reverse his outrageous punishment of Col. Madrid.

First Liberty’s petition signers tell President Trump, “Such acts of religious hostility can demean, demoralize, and destroy freedom of religion within our military—defying a presidential commission which found that faith is essential for a strong armed forces, and military codes which call for free exercise of religion for our brave service members.”

This refers to a commission by President Harry Truman that found religious freedom to be critical to military readiness, morale and performance within the armed forces. The finding was consistent with the entire history of the U.S. Military. General George Washington made unfettered religious conduct, diversity, and freedom a hallmark of the Continental Army during the Revolutionary War, stating that it was necessary for good morale and military effectiveness.

The petition goes on to say, “I ask you to send a strong signal to the military that our new Commander-in-Chief will not tolerate politically correct military officers abusing their positions to deny religious freedom to those under them. Firing any officer, such as Maj. Gen. McCoy, for violating the spirit—and letter—of the military code sends a clear message that religious freedom will be valued and protected in our armed forces. And it will be a giant step in reversing the past eight years of hostility to religious freedom for our fighting men and women.”

Anyone who has not yet signed the petition can do so
by visiting the petition webpage and quickly adding their name.