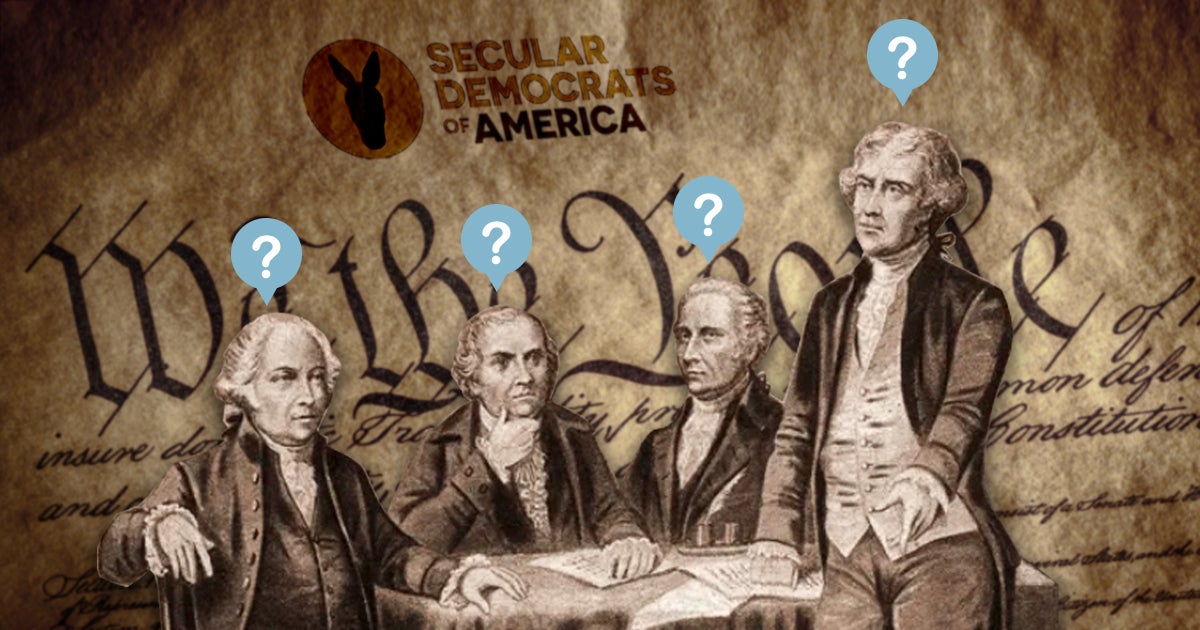 Recently, an activist group known as the Secular Democrats of America (SDA) sent a document to the president and the administration with a directive “to take back the mantle of religious freedom and pluralism.”

On the surface, the title—Restoring Constitutional Secularism and Patriotic Pluralism in the White House—makes the SDA’s mission sound appealing. The document calls to:

“…Oppose discrimination against atheists, agnostics, humanists, seekers, religious and nonreligious persons and to champion the value of freedom of thought and conscience…”

This even makes it sound harmonious with First Liberty’s own mission of protecting religious freedom for all Americans. After all, the First Amendment grants everyone the right to freely exercise their religious beliefs, convictions and to act according to their conscience without government censorship, threat, or coercion.

However, scratching beneath the surface, one sees that the SDA’s demands are much more dangerous. Inside the document, one finds a detailed “blueprint” redefining religious freedom in a way that would be unrecognizable to America’s Founders.

Building a Higher Wall of Separation?

Invoking America’s third president, the SDA implores a return to a “Jeffersonian approach to governance.” In other words, the SDA is petitioning to fortify a higher “wall of separation” between church and state.

Many high school civics students are undoubtedly familiar with those words from Jefferson’s letter to the Danbury Baptists. But what may not be known is that Jefferson wrote them to reassure the church that the First Amendment ensured the government would not interfere in their religious activities. At no time did Jefferson believe that religion and government could not mix.

Indeed, one need look no further than Jefferson’s attendance at church services held inside the US Capitol itself as evidence of his approval of strong church-state relations.

Jefferson and a vast majority of our nation’s Founders understood that faith is not only permissible in the public square, but also beneficial. Houses of worship and religious organizations all faiths care for the sick, feed the hungry, and shelter the homeless. And the benefits don’t stop with charity. A recent study reports that religion contributes $1.2 trillion to the U.S. economy.

Want to learn more about Thomas Jefferson’s “Wall of Separation?”

Check out this related article and exclusive video: Cooperation or Separation Between Church and State.

In stark contrast to the Founders’ constitutional intent, the SDA commands employees “to separate their personal religious beliefs from their work.” Sadly, some government officials have completely bought into this unconstitutional view.

First Liberty continues to protect Coach Joe Kennedy’s right as a high school football coach to pray alone after games. If the SDA gets its way, Coach Kennedy and millions of other Americans who are government employees will suffer irreparable harm to their First Amendment rights—putting them in the untenable position of choosing between their faith and their job.

Government employees are not the only ones who will suffer under the SDA’s aggressive plan.

Private religious organizations who have historically been able to work with the government are also threatened. In the case of Fulton v. City of Pennsylvania, currently pending before the U.S. Supreme Court, Catholic adoption agencies that have, for decades, worked with the government to provide loving homes for adoptive children have been told to sacrifice their religious identity in order to continue their work.

Unsurprisingly, the SDA opposes the right of the adoption agencies: “[n]o institution, religious or secular, is entitled to access taxpayer funding.” If the SDA gets its way, it won’t just be orphans in need of loving homes who suffer. Millions of Americans who benefit from the benevolent partnership between church and state will also suffer.

It’s tempting to quickly dismiss the SDA’s demands. However, people of faith must realize that some in positions of power who sympathize with the SDA’s message are already acting to implement its agenda.

For example, look at the effort on Capitol Hill to pass the so-called Equality Act, which if signed into law, would effectively overturn the Religious Freedom Restoration Act (RFRA) which, as its name suggests, was intended to restore religious freedom.

The Equality Act may sound appealing in name, but the only equality it seeks to achieve is to eradicate any religious beliefs that do not conform to the government’s preferred orthodoxy. It’s a law that would squash dissent and differing viewpoints from the public sphere. The sad irony is that the Equality Act is actually antithetical to the SDA’s stated principles and its championing of pluralism.

At a time when the SDA and many other activist groups are pushing to recreate the Constitution, First Liberty remains vigilant and undeterred in our mission to protect and defend religious freedom consistent with the vision of America’s Founders. And regardless of who resides in the White House or controls the Congress, we will continue being the best hope for victory for Americans of all faiths.