As 2017 closes, the U.S. Senate breaks an all-time record by confirming religious liberty champion Jim Ho to a seat on the federal judiciary 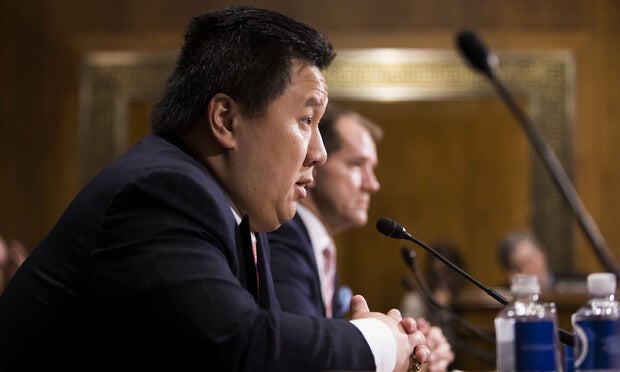 First Liberty Institute is proud to announce that James C. Ho, one of its top former volunteer attorneys, has been confirmed to one of the nation’s highest judicial positions. On Thursday, the United States Senate voted and confirmed Ho to the U.S. Court of Appeals to the Fifth Circuit. Ho contributed thousands of pro bono hours with First Liberty and “could become the Clarence Thomas of his generation,” as described in a recent article.

Ho asserts his commitment to the Constitution’s original meaning without any apologies. In his answers during the Senate confirmation process, Ho stated, “I am an originalist,” unequivocally declaring that the Constitution is not a living, breathing document, but is meant to be interpreted as originally written and intended.

As a volunteer attorney with First Liberty, Ho argued his first appellate case in Barr v. Sinton. Ho helped First Liberty win a monumental victory at the Texas Supreme Court for a pastor whose religious non-profit ministry was banned from operating within city limits by a restrictive ordinance. It was the first case in Texas Supreme Court history to apply the Texas Religious Freedom Restoration Act (TRFRA), which has since been used as a nationwide model in protecting religious freedom.

Ho’s legal expertise has made him a respected figure for people of faith across America. In another First Liberty case, Ho represented an African-American congregation in Holly Springs, Mississippi when the city banned the church from the town square in violation of the Religious Land Use and Institutionalized Persons Act. Ho also led the effort, along with First Liberty, to defend cheerleaders in Kountze, Texas when school officials told them the Bible verses on their homemade run-through banners were illegal.

Ho’s confirmation is a historic event not seen in nearly half a century. He is the 12th judge confirmed this year to the powerful federal appeals courts, setting an all-time record for U.S. presidents during their first year. Previously, presidents John Kennedy and Richard Nixon each held the record of 11 first-year appellate appointments.

Additionally, Ho’s appointment occurs at a time when opponents have ramped up their efforts to thwart the confirmation of conservative judges to federal vacancies. This year, Senate Democrats have attempted to filibuster the nomination of over two-dozen federal appointees, spending as much as 30 hours in floor debates per nominee.

In total, there are 179 seats on the U.S. courts of appeals. Currently, the Senate Judiciary Committee has already vetted 23 of President Trump’s judicial nominees, now waiting for a final confirmation vote by the full Senate. Five of those nominees are for seats on federal appeals courts.

Ho’s appointment is a positive step for all Americans – but especially for advocates of religious liberty. Americans should realize that it is vital to keep the momentum going. In the fight to restore religious liberty, it is all the more imperative that the Senate continue to vet and confirm nominees like Ho in a timely manner. With the holiday season well underway, National Review’s clever adage – “Ho, Ho, Ho!” – appropriately summarizes Ho’s confirmation as an early Christmas gift.

Visit First Liberty’s Interactive Federal Court Map to see judicial vacancies and nominees in your state, and contact your Senator about speedy approval.