COURT WATCH: Get the Latest on Judge Nominations with First Liberty’s Interactive Map!

Federal judges have immense power. Who will rule America? 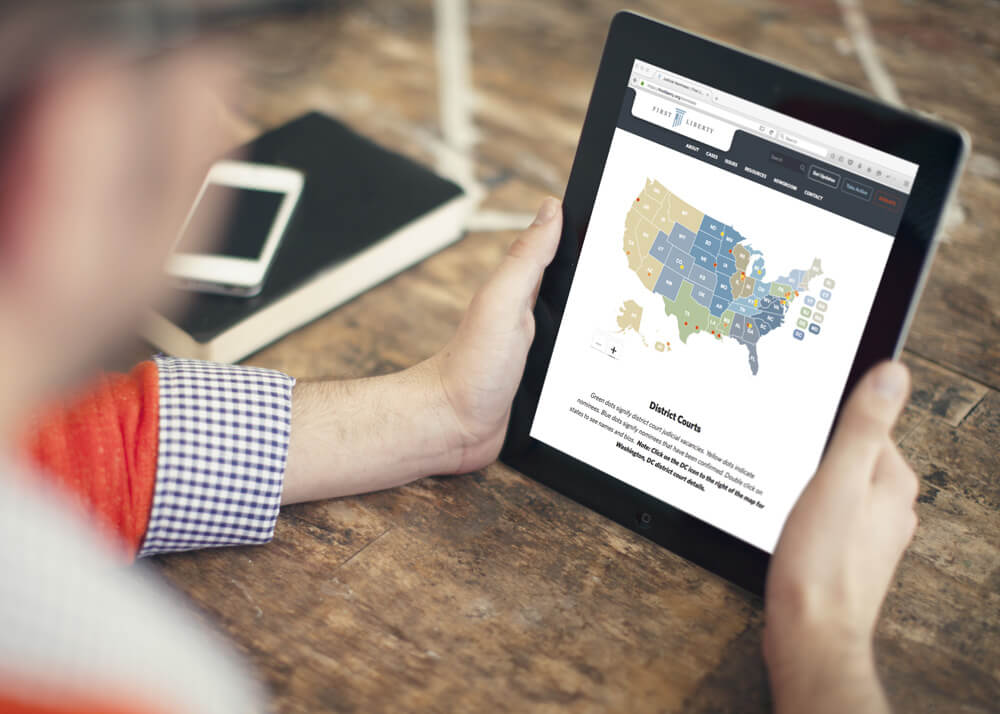 First Liberty has prepared an ongoing interactive map to help Americans understand and easily track the status of the federal judicial nominations that will impact their lives so profoundly.

Federal judges, including the U.S. Supreme Court, hold immense power over our lives and America’s future. How a judge interprets the Constitution and other laws can determine his or her decisions on issues that include religious freedom. And that makes judicial nominations important—and the center of conflict.

For that reason, First Liberty Institute’s legal experts have closely watched the unfolding battle over judicial nominations by the President and confirmations by the U.S. Senate. As with the Supreme Court nomination of Justice Neil Gorsuch, First Liberty is continuing to analyze and assess the religious freedom records of judicial candidates.

On Inauguration Day—January 20, 2017—President Trump was faced with 107 judicial vacancies in the federal court system. That number now stands at 144. This figure includes 17 circuit court vacancies and 119 district judgeships.

First Liberty’s map shows Americans the landscape of judicial vacancies in circuit and district courts across the nation. The map features up-to-date information regarding vacancies, nominations, and confirmations. It even provides biographies for President Trump’s nominees and recent confirmations.

So far, President Trump has made 56 nominations. These nominees, if confirmed, will have tremendous influence over the lives of Americans. Only an extremely small minority of cases—70-80 each year—are granted certiorari (acceptance of appeal) by the Supreme Court. This means that federal circuit and district courts make final, binding decisions and set legal precedents that ripple into the future.

This makes it especially important to confirm judges who are committed to the rule of law and who will issue opinions based on the Constitution rather than their own political ideology. This judicial philosophy provides an objective approach that recognizes the role of judges as those who apply—not make—the law.

All of our constitutional rights, including religious freedom, are best protected when judges follow these principles.

To date, however, only 16 have been confirmed, leaving over two-thirds of President Trump’s nominees waiting in the wings.

While the judicial map assists Americans in staying informed on developments in the judicial landscape, the map can also serve as a tool to help Americans take action to get constitutionalist judges confirmed.

According to the Constitution, it is the Senate’s role to confirm federal judges. However, the Constitution does not mandate the method by which judges are confirmed. Currently, a Senate practice known as the 30-hour rule is slowing down the already-long confirmation process. Sen. Charles Grassley (R-IA) has made progress overcoming some obstacles to confirming nominees, but the 30-hour rule remains. This rule allows the Senate to debate each nominee for at least 30 hours. At such a rate, filling the judicial vacancies would take years.

First Liberty has provided resources to help Americans reach out to their Senators to request reform of these practices. Specifically, Americans should ask their Senators to urge Senate Majority Leader Mitch McConnell to reform the 30-hour rule, and to thank him for the great progress he is now making to confirm President Trump’s outstanding nominees.