DARE TO BELIEVE: Here’s What Has Happened Since One Brave Student Took a Stand

When one person dared to believe, it made a difference 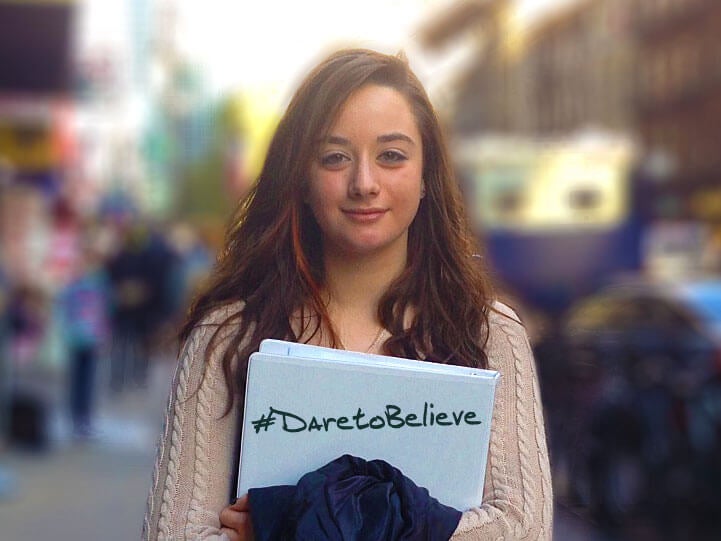 Liz Loverde never expected to stand up on behalf of students all around her community, state, and nation. However, as a sophomore in high school, Liz defended religious liberty when she challenged the officials of Wantagh Union Free School District in Long Island, New York.

To Liz, the stakes were high:

“Love is louder than depression, self-harm, pressure, bullying, school, home-life, addiction, etc. I want to tell them through ‘ Dare to Believe’ Christian Club that Jesus Christ is love. He saved me from depression, self-harm and suicide. He can save them. He can give them the victory over their difficulty”.

But the school refused to recognize the club simply because of its religious nature.

Something about that didn’t seem right to Liz. Fortunately, she did not have to confront the administration on her own. Within only eight days of First Liberty Institute intervening on Liz’s behalf, the officials complied with federal law under the Equal Access Act of 1984 and officially recognized Dare to Believe.

And in the process, students, parents, and educators all over the country learned about their First Amendment rights. Liz and First Liberty attorneys appeared on a Fox News broadcast across the nation—in addition to numerous media stories in New York and elsewhere.

But then what happened?

The students of the New York high school did not flock to join Dare to Believe once it became official. The publicity of the case had scared people off, including some of Liz’s friends. Several teachers didn’t approve of Liz’s stand. However, Liz continued to persevere, and promoted Dare to Believe meetings with posters around Wantagh High School.

Despite the challenges, Liz was able to fulfill one of the dreams she had outlined in her four-page proposal—serving the community. Liz and other members of Dare to Believe Christmas caroled at a local hospital that winter. They stood at the entrance, just in front of a Christmas tree, and sang songs for patients who passed by. Liz remembered seeing children come by in wheelchairs, and how they would stop and listen to the carols for a while. It was a happy moment, she said.

DARE TO BELIEVE CLUB ROLLS ON

Following her 10th grade year, Liz decided to homeschool. However, just because Liz would no longer attend Wantagh High, didn’t mean that Dare to Believe would disappear.

The legacy of the club passed on to Liz’s brother, Francesco, who continues to lead it today.

On Thursdays after school, Dare to Believe can be found congregated in a classroom. The meetings are laid-back; the small group of students who gather often watch Christian videos, share Bible verses, or tell stories about how God is working in their lives. In the year since Liz left, they have organized two food drives and one clothes drive on behalf of a local church.

Liz’s bravery affected more than just her high school and the Long Island community—her stand made a difference for students everywhere.

During those eight days when Liz was waiting for the school to approve her club, her story spread like wildfire. People not only in New York, but from as far away as the Philippines reached out to Liz to show support. Liz recalled a phone call she received one day:

“I remember when I got home—after I went in to New York City to go on Fox—a mother of a girl called and said her daughter was trying to start a Christian club nearby and wanted my help.”

Liz couldn’t believe that her story was inspiring so many, but the sad reality is that many more students will face discrimination on account of their beliefs. Looking back on her experience, Liz said that it definitely strengthened her.

“I always believed God is so big and that God can do the impossible,” Liz said. But still she wondered: “Why choose me, God? I’m just a little girl in New York.”

As students prepare to go back to school for the 2016-17 school year, they may think that there is nothing they can to do help make a positive change in the world, and protect their freedom of religion. But as Liz proved, when one person dares to believe, that’s enough.

“We are free because of Christ and [kids] shouldn’t waste an incredible gift,” Liz said. “God will fight for us. We have to not care what other people will think.”

Liz is preparing to attend Cairn University in Pennsylvania this fall to study political science and theology. She hopes to go into politics someday.