Why Did Uniformed Airmen Assault a Decorated Veteran? 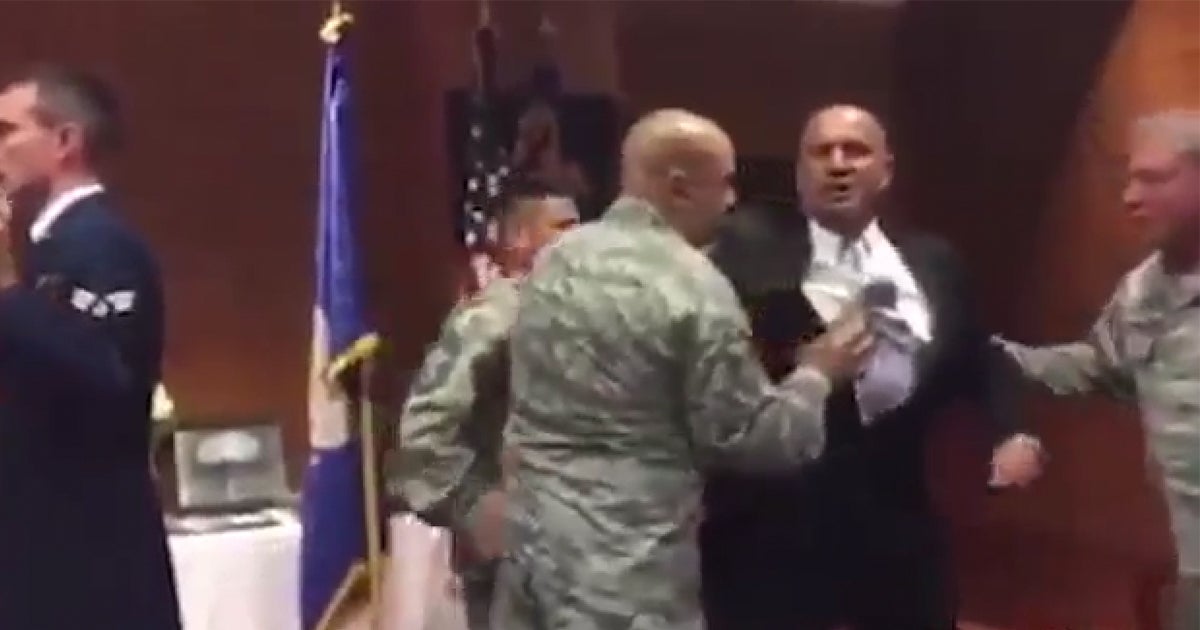 In the military, service members are trained to use established rules of engagement (ROE) when operating within high-security or threat environments. Certain scenarios call for an aggressive response, up to and including the use of lethal force. Lethality is always an option when confronting hostile forces, and US forces want the bad guys to understand that.

But in other instances, the ROE require “de-escalation,” or a reduction in tension. As an Air Force fighter pilot during the Cold War, I found myself flying missions where de-escalation within the ROE was necessary. In those scenarios, restraint was the order of the day, rather than an impulse to press an attack.

I want to be clear. At no time is it acceptable for US forces to surrender their weapons as a de-escalation tactic, especially on US soil. This apparently happened recently during an incident between armed Mexican army border-crossers and American troops along the US-Mexico border in Texas. Bright lines like that should not be crossed without swift US reactions in return – and the threat needs to understand that.

In stark contrast to that incident, I was shocked then to learn that our military responded not with de-escalation, but with swift, physical aggression against one of its own: Oscar Rodriguez, a decorated US Air Force veteran and non-commissioned officer (NCO).

Unfortunately, Air Force officials thought that it was necessary to use physical force to remove Oscar because he was about to deliver a patriotic flag-folding speech at a fellow NCO’s retirement ceremony – the same one he’s given over 100 times at various civic and military events.

If you aren’t familiar with what happened, retired Senior Master Sgt. Oscar Rodriguez Jr. agreed to perform his speech for retiring Master Sgt. Charles “Chuck” Roberson. In fact, Chuck personally asked Oscar to deliver his heartfelt speech because he was deeply moved by it from past experience.

But everything changed when Oscar stood up to perform the speech.

Right as he began, three uniformed airmen assaulted Oscar and forcibly dragged him out of the room. It’s painful for me to know this happened in the first place – and even more disturbing to actually see these disgraceful actions unfold on video.

Oscar is a fellow airman and a dedicated patriot. Like me, he served in uniform for decades to defend the very freedoms that he’s now being denied.

Three years and two lawsuits later, Air Force officials still have not held a single person accountable for violating Oscar’s constitutional rights, nor are they even willing to apologize.

During my time as a fighter pilot, I became intimately familiar with just how tediously the Air Force follows its ROE and other regulations. When a bad incident occurs, the Air Force requires that an investigation be conducted to hold accountable those responsible.

It’s in the Air Force DNA to follow protocols – but in Oscar’s case, it seems as though Air Force officials have either neglected or refused to live up to their own standards and creeds. A full investigation hasn’t been conducted, yet officials declared themselves free of any wrongdoing. How can they clear themselves when they haven’t properly investigated the incident?

What happened to Oscar is dishonorable and not in the best traditions of the U.S. Air Force, a service branch that I love and respect. By refusing to vindicate him, Air Force officials are not fulfilling their duty to the American people, or their own heritage.

President Trump’s Executive Order on Free Speech and Religious Liberty directed federal agencies to respect the religious liberty, including those of our men and women in uniform. And of course, the Constitution and federal law both protect service members’ right to serve in accordance with their faith.

But it looks as if some Pentagon officials are choosing to ignore their commander-in-chief and the law.

That’s why we at First Liberty Institute believe it’s imperative for the Trump Administration to reinforce its commitment to religious liberty and the Constitution. And the President can do just that right now by issuing an executive order that specifically directs military officials to protect religious liberty in their ranks.

American service members should not be denied the liberties and rights for which they fight, and no fellow brother-in-arms should be treated the way Oscar has been treated. More deference was given to those border-crossers than was given to Oscar. The bottom line is that these actions are beneath the dignity of a venerable and cherished institution like the U.S. Air Force – and should be disowned.