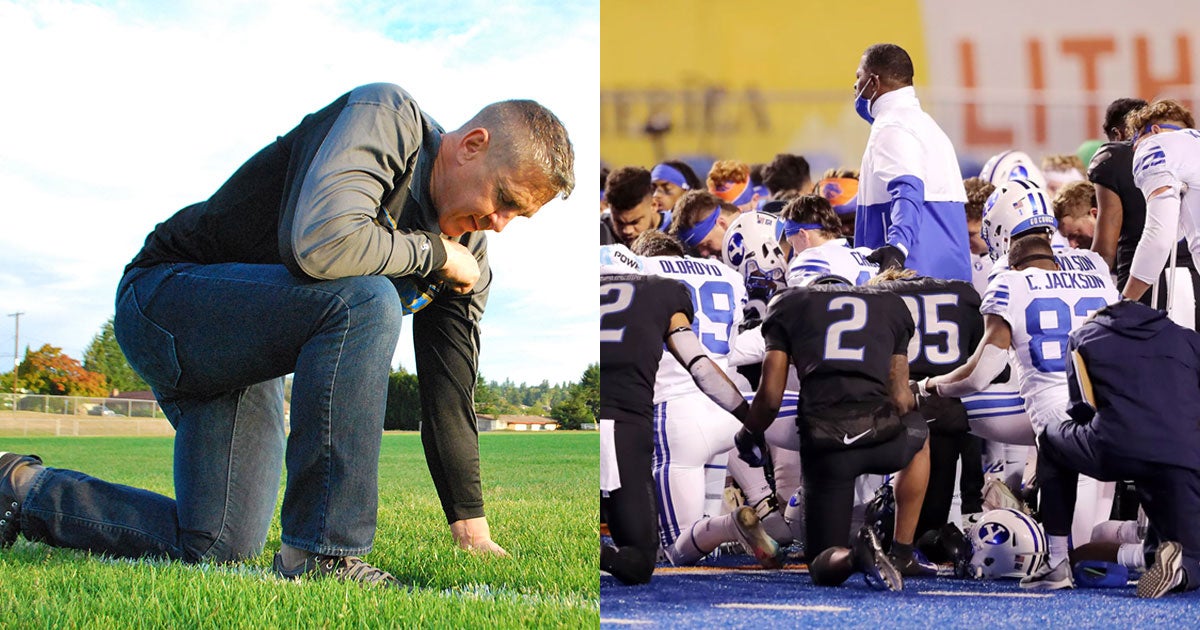 In America, prayer before, during and after football games is nothing new. In fact, it’s a historic tradition practiced on playing fields across the country at every level: high school, collegiate and professional.

Recently, players from Boise State and Brigham Young University (BYU) gathered on the field to pray with one another after a hard-fought game. They were led by Boise State’s team chaplain, Mark Thornton. For the team, the fans, as well as viewers across America, it was a display of hope, encouragement and unity that’s desperately needed in our country right now.

Unfortunately, enemies of religious freedom routinely fail to embrace such defining moments, and instead, opt to break-out their same-old tired playbook and throw “the bomb.”

Wasting no time, the Freedom From Religion Foundation (FFRF) sent a letter of complaint to the university, demanding that Boise State abolish the chaplaincy program. Although Boise State did not completely cut ties with Chaplain Thornton, the university made the decision to no longer give official recognition to the position of team chaplain.

When you step back and look at the university’s response, isn’t this just a watered-down, polite way of saying that the school’s team chaplain is effectively “sacked”?

Contrary to what the FFRF portrays, players weren’t coerced into praying, as the effort was voluntary, just like they always are. Not only that, but FFRF’s claim of “forcing” religion onto unsuspecting players makes absolutely no sense, considering that BYU (a faith-based school) and Boise State have previously prayed in the locker room or on the field.

This Is The One! Coach Kennedy’s Case

This most recent attack on religious expression on the football field highlights something very important: The urgent need for a sweeping legal victory, one that will reaffirm that in America we don’t cancel chaplains, players or coaches for living out their faith.

The prospect for such a positive decision could be coming in the near future, as First Liberty will be presenting oral argument at the U.S. Circuit Court of Appeals for the Ninth Circuit in Coach Joe Kennedy’s case later this month.

You’ll recall that First Liberty has been fighting to vindicate Coach Joe Kennedy’s constitutional rights, after he underwent his own “cancelation” years ago and was fired from his high school coaching job because he took a knee to silently pray on the 50-yard line after games.

A win for Coach Kennedy could be the decisive one to safeguard the religious freedom of millions of Americans, including that of Chaplain Mark Thornton at Boise State to continue joining and inviting his school’s football players to pray together.

Of course, as First Liberty attorneys prepare for a difficult battle at the liberal Ninth Circuit, it’s important to note that this appellate court is only the “Red Zone” for Coach Kennedy’s case.

The nine officials who could ultimately vindicate Coach Kennedy could be the Justices of the U.S. Supreme Court. More promising, there’s an earlier statement from four of the Justices signaling that the court is open to reviewing this case in the future.

This encouraging statement from the Supreme Court indicates that Coach Kennedy’s case could also be the one to overturn legal precedent that’s haunted people of faith and religious freedom for the last thirty years.

Just as Coach Kennedy has refused to quit despite facing an intense and grueling legal battle, together we must also keep forging ahead in this Essential Fight to save the Constitution and the very heart and soul of our nation. The legal battle for Coach Kennedy is about much more than reclaiming justice for one coach—it’s a fight that must be won to protect the constitutional liberties of ALL Americans.