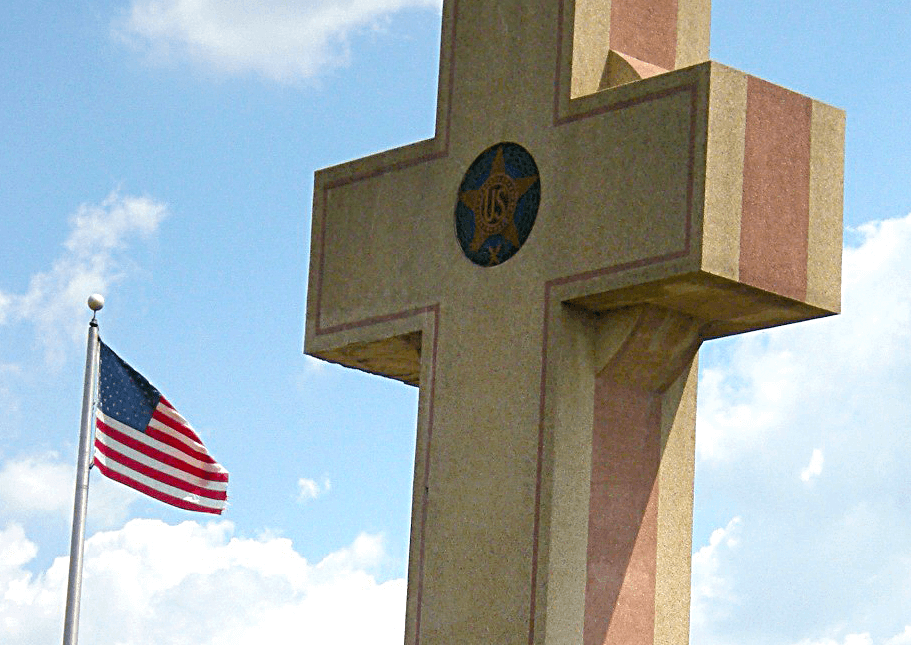 In the latest phase of a two-year legal battle to protect a cross-shaped World War I veterans memorial from removal or destruction, First Liberty filed an appellate brief on Monday representing The American Legion before the U.S. Court of Appeals for the Fourth Circuit. The American Legion is the largest veterans service organization in the country, with over 2 million members.

“The American Humanist Association is using the First Amendment to attack a ninety-year-old veterans memorial simply because it is in the shape of a cross,” said Kelly Shackelford, President and CEO of First Liberty. “That is sad and that is not the law. We must protect these memorials and other monuments that honor our nation’s military heroes.”

The Bladensburg World War I Veterans Memorial became the subject of a lawsuit in February 2014, when the American Humanist Association (AHA) claimed that its cross shape on public ground violated the Establishment Clause of the First Amendment.

Though a federal district court ruled in November 2015 that the memorial was constitutional, the AHA appealed the ruling in December.

First Liberty and its volunteer attorney team at the Washington, D.C. office of international law firm Jones Day are defending the memorial on behalf of The American Legion, which originally built the memorial.

First Liberty’s appellate brief makes multiple arguments explaining the constitutionality of the Bladensburg Memorial, such as:

In short, the AHA has neither the law nor the facts on its side. The Memorial was built as a memorial, it has only ever been used as a memorial, and it has always been regarded by the community as a memorial. The Establishment Clause does not require the Court to reach into this community and tear out a cherished landmark.

“This memorial was erected to honor local American heroes who gave their lives in World War I,” said Noel Francisco, lead counsel for The American Legion and chair of Jones Day’s Government Regulation Practice. “It complies with the law in every respect and should stay right where it is.”

“Tearing it down would lead to the very religious divisiveness the Founders intended to avoid when they wrote the First Amendment,” Francisco added.

According to Shackelford, tearing the memorial down would also lead to the endangerment of veterans memorials everywhere.

“Our victory at the District Court set an important precedent for veterans memorials around the nation,” Shackelford said after the AHA’s appeal in December. “Now we have the opportunity to expand that precedent with yet another victory in favor of this historic veterans memorial, which will help protect memorials across the country.”

Erected by a local post of The American Legion in 1925, the Bladensburg Memorial honors 49 men of Prince George’s County, Maryland who died serving in WWI.

According to an article by Richard Wilson published in Prince George’s Magazine in 1983, ten mothers who had lost sons in the war were part of the memorial committee formed by local citizens to raise money for the Memorial. In 1920, Mrs. Martin Redman, the mother of the first sailor from the county to lose his life in World War I, became treasurer. In a letter to Senator John Walter Smith, who donated money for the cause, Mrs. Redman wrote:

By 1922 the committee’s efforts to fund and erect the memorial had faltered and a local post of The American Legion stepped in and took charge, erecting the Bladensburg Memorial in 1925. It bears the names of 49 fallen servicemen from Prince George’s County, other commemorative words and dates, and a quote from President Woodrow Wilson:

The seal of The American Legion is prominently emblazoned on the two primary faces of the monument at the intersection of the cross arms. The following words are inscribed on the memorial’s base, one on each side: “VALOR; ENDURANCE; COURAGE; DEVOTION.”.

Today, the memorial sits in Veterans Memorial Park, a public area with several other memorials commemorating those who served in other wars and conflicts in American history.