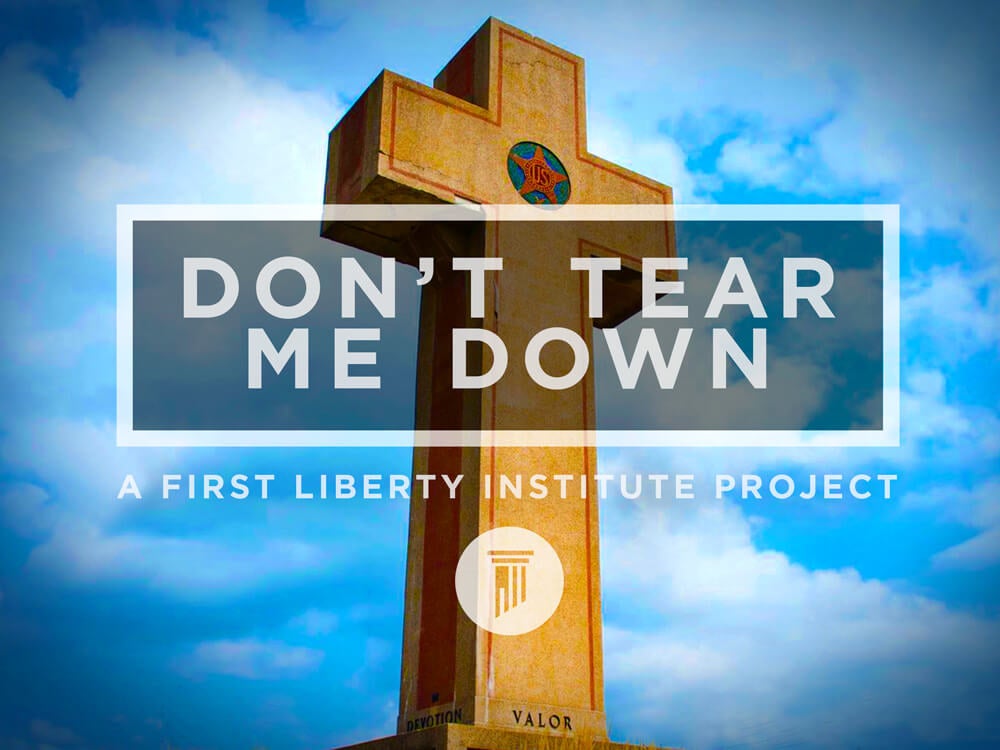 On the week we observe Veterans Day, First Liberty Institute launched a campaign—Don’t Tear Me Down—to honor our veterans and spread awareness of efforts by humanists to deface or remove veterans memorials around the country.

The immediate attack on such memorials revolves around a lawsuit brought by the American Humanist Association challenging the 92-year-old Bladensburg World War I Veterans Memorial.

First Liberty Institute represents The American Legion in defense of the Memorial.

First Liberty is asking citizens to sign a petition supporting efforts to save the Bladensburg Memorial and other veterans memorials across the country.

A MEMORIAL CREATED IN PART BY MOTHERS OF LOST SONS

In 1919, ten Gold Star mothers rallied their community of Prince George’s County, Maryland, to erect a memorial to their sons lost in World War I. Soon, returning veterans of the Great War— members of the local American Legion post—would finish what these mothers began: The Bladensburg World War I Veterans Memorial, dedicated in 1925.

The Memorial stood peacefully, without complaint, for almost 90 years until the American Humanist Association (AHA) filed a lawsuit seeking to have it removed or demolished.

They convinced the U.S. Court of Appeals for the Fourth Circuit, just one level below the Supreme Court, to declare the monument unconstitutional just because the memorial is cross-shaped—a shape chosen by those mothers so long ago that recalls the gravestones of their sons’ graves in Europe.

Stunningly, during the oral argument, one judge even questioned whether the monument should have its arms removed. This would desecrate the Memorial and the memory of those it honors!

SPEAKING FOR THOSE WHO NO LONGER HAVE A VOICE

It now falls upon us to defend that which those Gold Star mothers started and The American Legion completed. Otherwise radical anti-religious freedom groups could succeed in having these cross-shaped monuments defaced or bulldozed to the ground.

Enough is enough. First Liberty refuses to let that happen. We believe America should remember and honor her veterans. If necessary, First Liberty will take this case to the U.S. Supreme Court to keep the Memorial standing and unscathed.

The last surviving World War I veteran passed away not long ago. They can no longer speak for themselves to defend their right to honor those who paid the ultimate sacrifice for freedom. For their sakes, First Liberty is asking members of the public to sign a petition supporting The American Legion, adding their names to the growing list of Americans speaking for those who no longer have a voice.

STANDING FOR VETERANS AND THEIR MEMORIALS

But Bladensburg is only the beginning. Atheists want to tear down all veterans monuments on public land that contain similar imagery. Removing or defacing the Bladensburg Memorial would set a legal precedent that could begin leveling veterans memorials like bowling pins.

Without further court intervention, not only will the Bladensburg World War I Veterans Memorial be torn down, but humanists will use this decision to target other monuments across the country—including in nearby Arlington National Cemetery.

FIRST LIBERTY INVITES YOU TO STAND WITH US

Imagine America without our veterans memorials. How would we remember? How would our children remember?

We never want to find out.

As grateful citizens, we support your efforts to honor those who have fallen in battle and to keep these visible reminders of valor, sacrifice, endurance, and devotion standing across the country.

First Liberty will deliver the petition with a list of all signers to The American Legion’s National Convention in 2018, letting the millions of veterans know that Americans support them in the fight to protect our nation’s veterans memorials.

It is our duty to stand up and tell these extreme organizations that we won’t have our freedoms and values torn down. By signing our petition, you will be showing your support for our veterans and the memorials erected on their behalf.