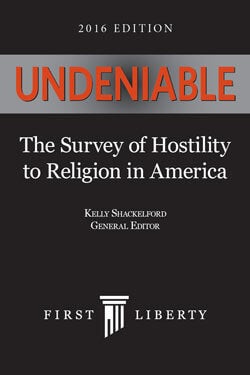 For anyone who thinks religious discrimination is non-existent in America, the attorneys at First Liberty Institute have a different story.

First Liberty announced on Monday the release of Undeniable: The Survey of Hostility to Religion in America (2016). It is available online here, free of charge.

This 2016 edition of the annual survey documents 1,285 cited attacks on religion in America—more than double the 600 attacks documented in the first edition, released in 2012.

The instances cited include attacks on religion in schools, in the military, in the public arena, and in houses of worship.

“The religious liberty of Americans is under attack like never before,” says Kelly Shackelford, President and CEO of First Liberty Institute. “The time to take a stand for our First Freedom is now.”

COMPILING THE EVIDENCE: THE GROWING HOSTILITY

“Undeniable came about because many simply refused to believe that religious hostility was occurring right here in America,” Butterfield said. “Unfortunately, the hostility to religion in America is real. With each new edition every year, we are providing the evidence that that hostility is growing rapidly.”

Among the attacks listed in Undeniable are First Liberty’s own cases, including:

“The first step to recovery from any problem is to stop denying a problem exists,” Roger Severino, Director of the DeVos Center for Religion and Civil Society at The Heritage Foundation told the Conservative Review.  “First Liberty Institute’s report shatters the myth that the left is on the side of tolerance by documenting countless examples of progressives using the power of government to target people of faith for hostility and exclusion because of their beliefs.”

TAKING THE NEXT STEP: AMERICA’S HOPE FOR RELIGIOUS LIBERTY

For each attack listed in Undeniable, the editors have also indicated the current status or outcome for each case. And as the Executive Summary states,

[T]his survey shows that those persons and organizations who stand up for religious liberty win when they fight. As more and more Americans become aware of the growing attacks on religious liberty and what their rights are, they can stand and turn back the tides of secularism and hostility that have so eroded our religious liberty rights, our First Freedom.

There is hope for restoring religious freedom for all Americans—and it begins by acknowledging the hostility that exists. To find out more about how you can become involved in the ongoing battle for religious freedom in America, click on one of the following links: