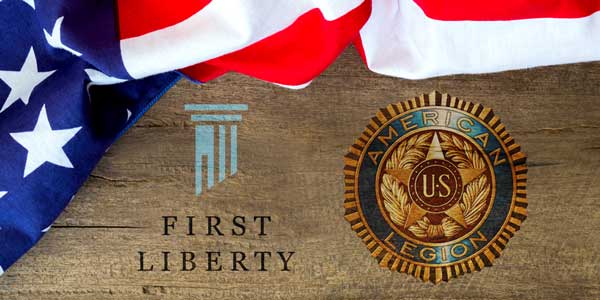 In recent years, The American Legion has partnered with First Liberty Institute on numerous occasions to protect religious liberty and America’s religious heritage.

The American Legion, chartered by Congress in 1919, is the largest wartime veterans service organization in the nation with over two 2 million members.

In 2001, the ACLU filed a lawsuit arguing that the cross-shaped Mojave Desert Veterans Memorial was unconstitutional since it was located on government land. Judges even ordered a heavy bag padlocked over the memorial to cover it up during the appeals process.

To help save the memorial, First Liberty Institute stepped in and filed a friend-of-the-court brief at the U.S. Supreme Court on behalf of The American Legion, the VFW, the Military Order of the Purple Heart and the American Ex-Prisoners of War.

In 2010, the Supreme Court upheld the constitutionality of a law passed by Congress that allowed the transfer of the memorial and the land upon which it stood to the VFW. In its decision, the Supreme Court referenced First Liberty’s amicus brief 12 separate times. The protection of the Mojave Desert Veterans Memorial Cross created an important precedent for defending other memorials that contain religious imagery from being torn down.

For more than 20 years, this veterans memorial had been the subject of a lawsuit brought about by the ACLU, which claimed the memorial’s shape violated the U.S. Constitution. In 2011, the U.S. Circuit Court of Appeals for the Ninth Circuit ruled the memorial unconstitutional.

First Liberty filed a petition asking the U.S. Supreme Court to hear the case and reverse the Ninth Circuit’s ruling. Briefs poured into the U.S. Supreme Court in support of First Liberty’s petition, including briefs from The American Legion, Attorneys General of 19 states, members of Congress, and veterans who are honored by some of the more than 3,500 plaques of the memorial.

In 2015, in a victory for veterans and religious freedom, the federal government sold the memorial and the land surrounding it to a private veterans organization. The sale ended the legal dispute over the memorial’s constitutionality and protected the memorial from the ACLU’s attempt to tear it down.

3. Pledge of Allegiance in New Jersey

In 2014, the American Humanist Association sued a New Jersey school district for conducting the daily, voluntary recitation of the Pledge of Allegiance in its schools in accordance with state law and the U.S. Constitution.

First Liberty, along with a world-class network attorney team, filed a motion to intervene in the case on behalf of The American Legion and protect the Pledge of Allegiance’s “under God” wording. Because The American Legion works to instill patriotism and respect for America’s flag, it played an instrumental role in crafting the current language of the Pledge of Allegiance.

In 2015, the Superior Court of New Jersey, Monmouth County, granted First Liberty’s motion to dismiss the humanists’ lawsuit and threw the lawsuit out of court. The ruling upheld the “under God” wording in the pledge.

4. “In God We Trust” National Motto

A group of atheists and humanists filed a lawsuit against the federal government demanding the removal of the phrase “In God We Trust” from U.S. currency.

First Liberty responded by filing a brief in federal district court on behalf of The American Legion, defending the National Motto and supporting the federal government’s motion to dismiss the lawsuit. The American Legion believes the National Motto is a solemnizing statement honoring the valor and courage of military service members, and recognizes it as part of America’s history and heritage.

In its ruling, the federal district court dismissed the atheist group’s claims that the use of the National Motto on currency violates their rights to free exercise, free speech, and equal protection. First Liberty’s action played a key role in preventing another attempt to ban the motto.

Learn more about our successful defense of the “In God We Trust” National Motto.

First Liberty represents The American Legion in our ongoing effort to prevent the removal or destruction of the Bladensburg World War I Veterans Memorial. In 1925, a local post of The American Legion erected the Memorial to honor the selfless sacrifice of 49 men from Prince George’s County, Maryland who gave their lives serving our country during World War I.

Built on private land and private funds, The Bladensburg Memorial stood without complaint for over 90 years, until the land was annexed by the government in order to construct – ironically – a WWI memorial highway. But in 2014, the American Humanist Association filed a suit to remove the memorial because it is in the shape of a cross. In 2017, the U.S. Court of Appeals for the Fourth Circuit declared the memorial unconstitutional.

First Liberty is preparing to file a petition to the U.S. Supreme Court to preserve this historic memorial: a gravestone to the fallen heroes of Prince George’s County, Maryland.

The successful combination of First Liberty Institute and The American Legion has helped restore and protect religious liberty for thousands of military service members and veterans. At First Liberty, we consider it an honor to have served alongside one of the most distinguished veterans organization in the country, especially to preserve America’s heritage of religious freedom. Because they fought for us, we are proud to stand up and fight for them.