Exclusive Interview: Kelly Shackelford’s Expert Insight on the Supreme Court and the Future of Religious Liberty 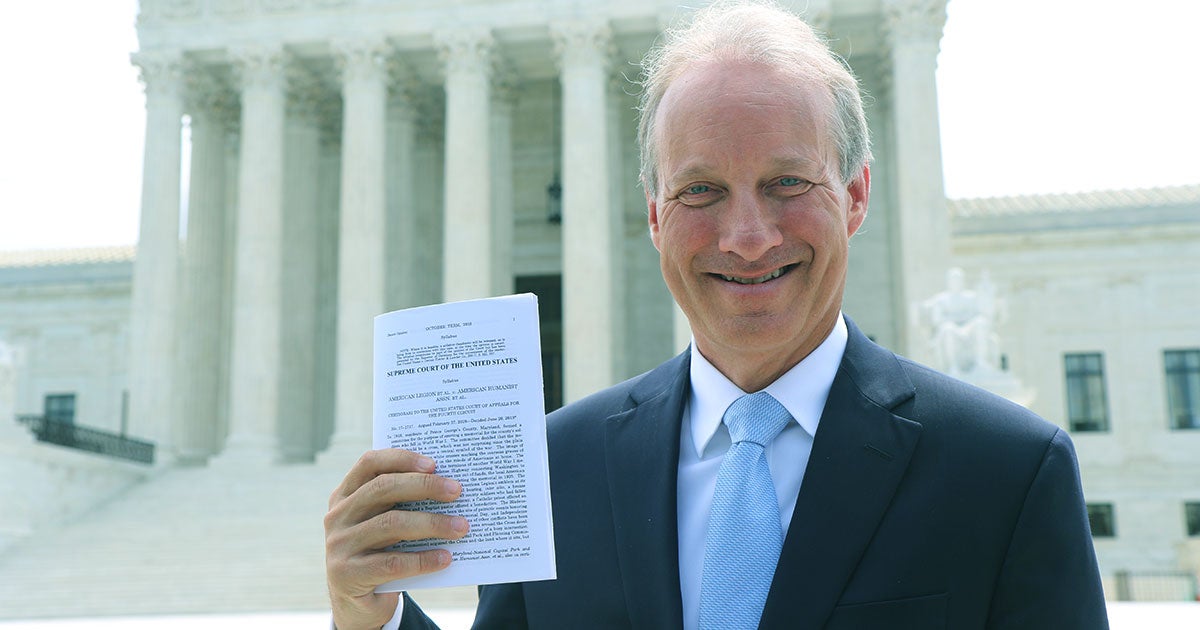 Last week, First Liberty Institute and The American Legion made history at the U.S. Supreme Court, when the Justices issued their ruling stating that the Bladensburg WWI Veterans Memorial is constitutional, and that it will remain standing in honor of the 49 fallen heroes of Prince George’s County, MD.

While millions of Americans are celebrating this historic and landmark victory for religious freedom, several opponents, including the ACLU, were eager to undermine and belittle the High Court’s decision.

Opponents to the decision began immediately referring to it as an act of “religious favoritism”, even going so far as to call it “deeply disappointing.” Make no mistake, their strategy is to portray the Justices’ decision as a narrow ruling in an effort to lessen public perception of this major, precedent-setting victory, one that’s going to protect religious freedom for decades to come.

In the video below, First Liberty Institute’s President, CEO and Chief Counsel, Kelly Shackelford, explains why the Court’s ruling is going to have a direct impact on you, your family and the religious freedom of millions of Americans.

Watch below to get Kelly’s in-depth analysis and learn more about what the Justices said.

In addition to Kelly’s explanation, we’ve outlined three main points in this historic decision that you and every other American needs to understand. Let’s take some time to explore these in more detail.

The 7-2 Majority Opinion: A Clear Victory

At a broad level, most of us understand that this was, without question, a victory that saved the Bladensburg Peace Cross, along with thousands of other similar veterans memorials—including those in Arlington National Cemetery—from desecration or destruction.

In summary, seven of the nine Justices agreed and concluded that the Bladensburg Cross does not violate the Constitution, specifically the Establishment Clause of the First Amendment. In other words, these Justices said nothing is wrong with this memorial, and that it will remain where it is and will not be coming down.

5 Justices Who Put the Lemon Test on the Shelf

When we look more intently at the decision, we find five Justices who agreed that the Lemon test is no longer applicable, and that it must be “shelved,” as Justice Gorsuch phrased it.

Aptly named, the Lemon test is a bad legal precedent that’s been around for the last 50 years, and it’s what has caused countless attacks on religious displays, like nativity scenes, Ten Commandments monuments, Stars of David, national motto plaques and other similar symbols with religious imagery. This includes a current Ten Commandments memorial that First Liberty is defending on behalf of the state of Arkansas.

Now, with five Justices of the Supreme Court making it clear that they will no longer look or review cases in light of Lemon, it’s abundantly clear that this is ruling will have longstanding implications for how future religious freedom cases are decided.

That is to say, the Bladensburg decision does establish an important precedent, namely that the Supreme Court will use a more historical approach when interpreting the Establishment Clause.

So while our opponents may be trying to downplay the significance of the decision, there is no disputing that a majority of the Justices have put Lemon on its deathbed, and this means that a half-century of government hostility to religion in public is finally over.

Presumption of Constitutionality and the Future of Religious Liberty

Digging in even deeper, we also find five Justices who agreed that in addition to historical monuments or symbols, we have longstanding and ageless principles in America, and that all of these are presumed to be consistent with the Constitution.

In other words, practices and displays consistent with America’s history and tradition are, by default, considered constitutional. This means that from now on, the burden falls on our opponents to prove that a display or tradition is a complete and direct violation of the Constitution.

This is a major legal achievement, especially because it will make it far more difficult for our opponents to bring up frivolous lawsuits. Prior to the Bladensburg decision, it was far too easy for anyone to be “offended” by some religious symbol or practice that they were exposed to in a public setting. In essence, activist groups and hostile government officials can no longer use the First Amendment to club religious Americans or to stifle their public expressions of faith.

In practice, this makes it permissible to continue on with religious traditions, practices or displays that have been used in our country’s history. The presumption of constitutionality will open up countless opportunities for Americans to live and express their faith freely, such as opening government meetings with a prayer or invocation, students in public schools sharing their faith in their graduation speech, and even teachers being able to pray privately on school grounds.

Over the last 30 years, many of us have lived in an America in which many thought it was illegal for religion to exist in the public square. But thanks to this decision, you and I, and millions of Americans of all faiths, will now have more religious freedom than we’ve had in years – or even in our lifetimes.

Right now, YOU can be force multiplier by supporting First Liberty’s efforts to protect and defend our service members from attacks on their religious freedom. Give now and join the fight.