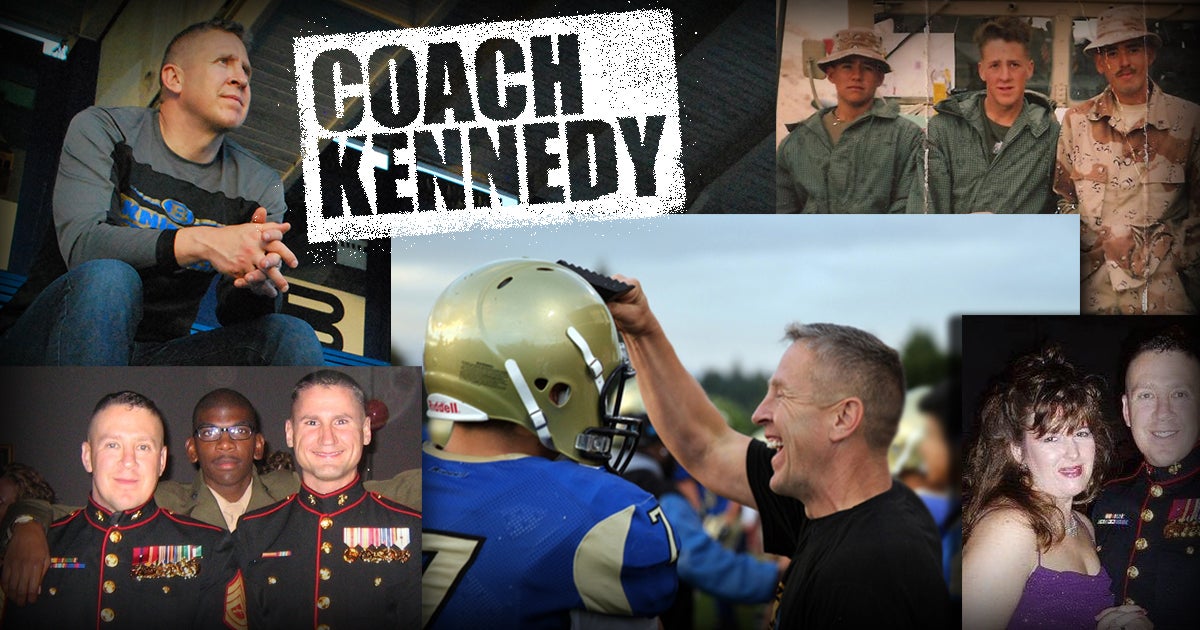 In a 6-3 opinion, the Supreme Court held that Coach Kennedy’s practice of private prayer at the end of football games was protected, private speech. It found that the school district’s regulation of this speech was a violation of the First Amendment. The case wasn’t just important for Coach Kennedy. It upheld the constitutional rights of Americans across the nation.

Many people know Coach Kennedy as the “kneeling football coach.” But there’s so much more to his story. Behind the big smile and gregarious personality is a history of resilience, courage and perseverance.

After a difficult childhood that included moving in and out of foster homes, Coach Kennedy sought discipline and stability. This led him to serve his country in the armed forces for 20 years, most of that time in the U.S. Marine Corps. His service included two deployments during Operation Desert Shield and Desert Storm.

While overseas, he witnessed firsthand what the absence of religious freedom looked like. This experience gave him a greater appreciation for the freedoms we enjoy here in America. It also gave him a first-hand perspective of why we cannot take our constitutional rights for granted.

In case you haven’t had an opportunity to hear about Coach Kennedy’s military service, we encourage you read this inspiring interview: Coach Joe Kennedy: How 20 Years in the Marine Corps Gave Him the Courage to Kneel. 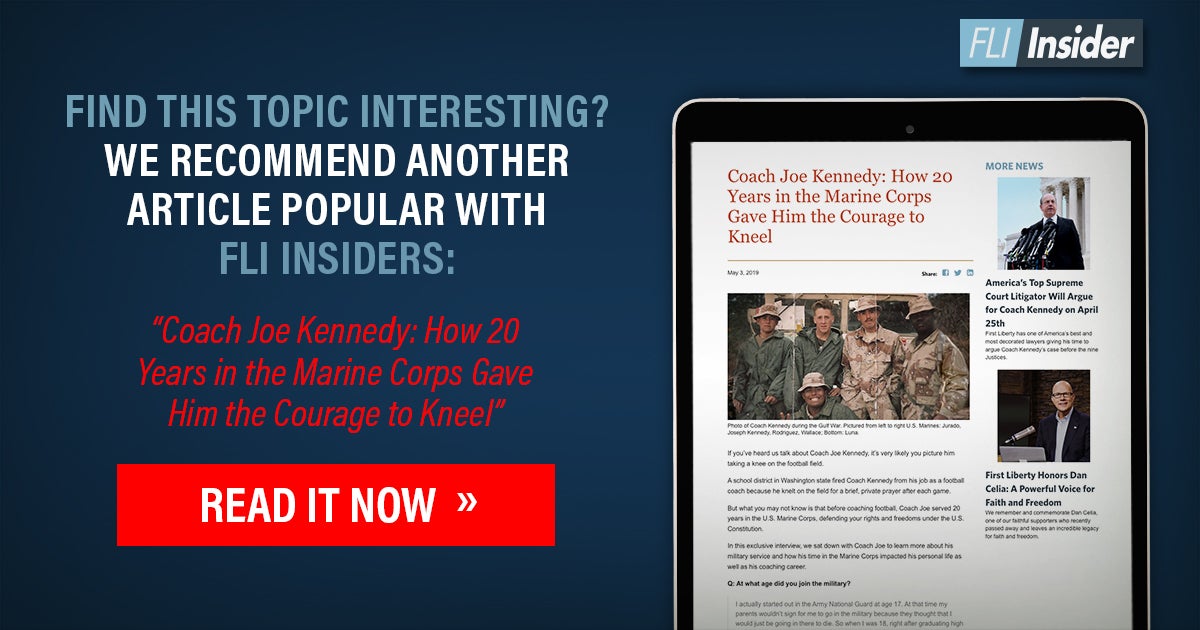 As a Marine, Coach Kennedy took an oath to protect the Constitution. But fighting on the battlefield was only one part—indeed, only the beginning—of his duty and service to his country. Not long after leaving the service, he’d once again be called to defend the Constitution. Although this time, he wouldn’t be wearing a military uniform.

Many people often ask: Why did Coach Kennedy kneel to pray in the first place?

In 2008, Coach Kennedy returned home from military service and got connected with the local football team. But it was not something he sought out. One day, while out for a run, someone driving by asked him if he had any experience coaching. He told that person about his military service and that he thought he could use what he’d learned in the service to be a coach.

When he became a football coach at Bremerton High School in Washington state, Coach made a personal commitment to God. After every football game—win or lose—he would take a knee to pray for his team and thank God for the opportunity to be a coach. So, at his inaugural game, Coach Kennedy knelt on the 50-yard line for a brief, personal prayer.

For seven years, Coach Kennedy lived out his faith on the field without receiving any complaints. Shockingly—after a compliment from a school administrator from a visiting team—the Bremerton School District prohibited him from engaging in “demonstrative religious activity” and ultimately told him any religious expression would have to be done where nobody could see him.

As a combat veteran, Coach Kennedy knows firsthand the sacrifices one must make to protect the liberties we cherish—especially the right to freely live out one’s faith. Not praying on his own after games would mean breaking his commitment to God and forfeiting the liberties he defended.

He had to live up to what he’d learned as a U.S. Marine: semper fidelis—always faithful. So, he continued to pray—which eventually cost him the job that he loved. Despite the consequences, he knew, deep down, staying true to his faith was the right thing to do.

Coach Kennedy braved nearly seven years of litigation. His case went up and down and back up again through the federal courts. Despite numerous setbacks, his courage and tenacity eventually brought him to the highest court in the land. And now, we’re celebrating a victory for Coach and a victory for religious freedom.

Looking back on Coach Kennedy’s journey, it’s clear the many adversities he faced in life—from his tough childhood to his military service—prepared him to take a stand for his constitutional rights, as well as for the rights of all Americans.

We applaud and commemorate Coach Kennedy for his heroic perseverance, both on the frontlines of war and on the legal battlefront. Time after time, this Marine-turned-football-coach has led by example, showing us that we must never back down in our commitment to both God and country. 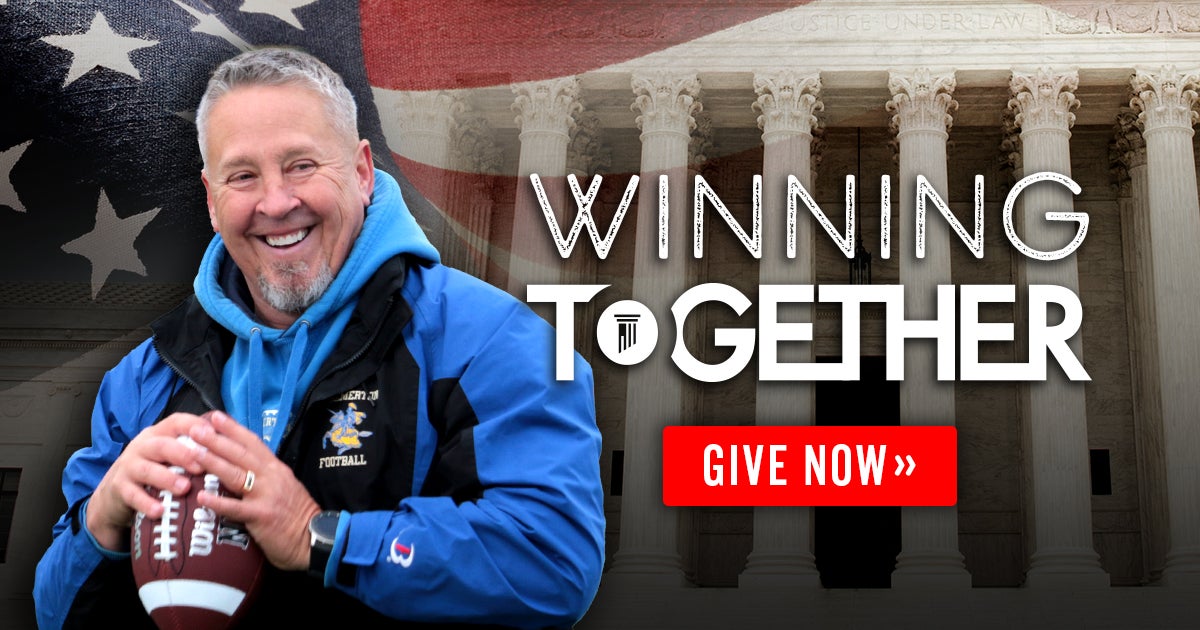