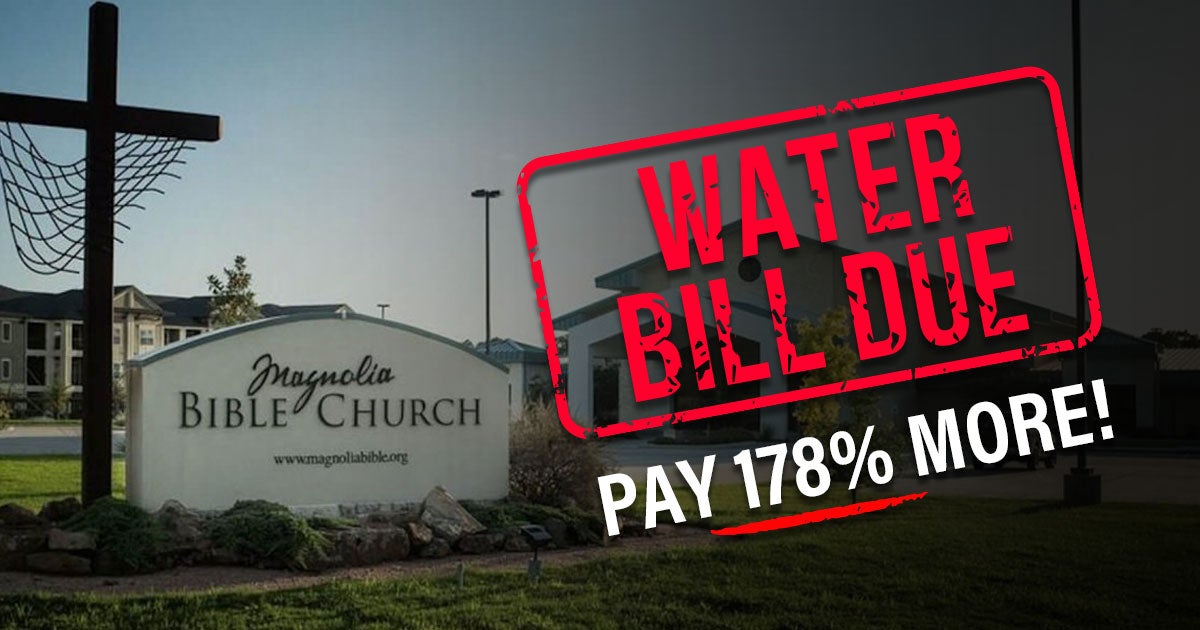 Even though 2020 was filled with unprecedented challenges and arduous battles for religious freedom, the New Year is already bringing signs of hope for houses of worship fighting to reclaim their First Amendment rights—especially for three Texas churches currently being represented by First Liberty Institute and our volunteer network attorneys at the law firm, Baker Botts.

This critical ruling means that First Liberty’s clients will finally get their day in court. It’s also a positive step in the Essential Fight for religious liberty not just in the Lone Star state, but for the legal rights of churches more broadly.

By granting a new trial, the Third District Court of Appeals realized that the city of Magnolia should have at least given these churches an opportunity to challenge the city’s water fee scheme in court. In other words, it’s an important affirmation of other quintessential American rights found in the Constitution: the right to due process and a fair trial.

The Start of the Scheme: Getting Churches to Pay Their Fair Share

In 2019, Magnolia’s Mayor and the City Council voted to revise the city’s fee schedule for water services, creating an expensive “institutional” fee that only applies to churches, faith-based schools and other nonprofit organizations.

In adopting the new policies, the city cleverly disguised this new tax by calling it something different, knowing fully well that they couldn’t impose a sales tax, property tax, or other taxes from which churches and non-profits are typically exempt.

Let’s remember that in Texas it’s ILLEGAL for local governments to tax churches and nonprofits. Nevertheless, Magnolia officials continued with their underhanded scheme to wring more money out of houses of worship.

And much like the blatant discrimination against churches that we’ve seen throughout the current pandemic, the disparate treatment of government officials in Magnolia came to fruition as they increased the water and wastewater fees of local churches and nonprofits to significantly higher rates than that of commercial businesses.

In one case, a church’s water bill increased 178%.

Even more appalling is the fact that city officials openly acknowledged their discriminatory intent. Magnolia’s city administrator publicly stated the water fee scheme “would allow the city to collect funds from these entities in place of taxes or other fees.”

Though local churches objected to this unconstitutional financial burden, city officials persisted in their unlawful acts. They even went as far as to travel to the state’s capital several hours away in order to seek approval for their water fee scheme and block out any possibility of a legal remedy. Only when the local congregations sued Magnolia several months later did they learn of the city’s subterfuge.

Faith-Based Institutions and Religious Freedom Are Essential for a Reason

Apart from being against the law to tax churches, it’s also unconscionable and cruel for government officials to so blatantly threaten, discriminate and treat houses of worship in this harsh way…it rips at the very fabric of our nation’s heritage and history of protecting these essential pillars of our society.

In local communities across America, churches, faith-based institutions and nonprofits provide critical assistance, benefits and resources for people in need. That’s why they’re tax-exempt in the first place.

Indeed, if the current pandemic and health crisis has taught us anything, it’s that houses of worship and religious freedom must be considered essential for a reason, as they provide services that include financial aid, housing, childcare, educational and professional training, and a host of other critical community aid, particularly in times of national distress.

Bottom line, in America, state officials should not be punishing and burdening churches and faith-based nonprofits with extra fees that keep them from carrying out their essential work. In the end, everyone—including the state—suffers the consequences.