First Liberty is remembering and honoring Walt Tutka, a courageous client who died on December 26. Walt stood firm for his religious liberty rights at work—and in so doing, helped set an important precedent for the religious freedom rights of employees everywhere.

Walt, whose remaining family includes his wife, five sons, and two grandchildren, worked for many years as a substitute teacher in Warren County, New Jersey. He was also a member of Gideons International, an organization that provides free Bibles around the world.

As with all of First Liberty’s clients, faith was an integral part of Walt’s life. When retaliated against for that reason, he stood courageously for his beliefs and his constitutional rights.

While he leaves behind family and friends, Walt also leaves a legacy of bravery and sacrifice—a legacy that helps to ensure that all Americans can live in liberty.

Walt’s Victory for Religious Freedom in the Workplace

First Liberty began representing Walt Tutka after he was fired from the Phillipsburg School District in New Jersey for handing a student a Bible. As First Liberty pointed out, and the Equal Employment Opportunity Commission later confirmed, Walt did nothing to violate the law.

Here’s what happened. While holding open the door for a student one day in 2012, Walt commented to a student that “the first shall be last, but the last shall be first.” The curious student asked Walt several times for the source of the quote, and eventually Walt showed the student the quote in his personal Bible, so that the student could look it up at home. The student commented that he did not have a Bible at home, so Walt spontaneously gave the student his Bible.

For that, the school district fired him in 2013.

First Liberty filed a charge of discrimination with the EEOC, which found in 2014 that the school district discriminated against Walt “on the basis of religion and retaliation.”

“The EEOC thoroughly investigated this matter and found that Walt Tutka is a victim of religious discrimination and retaliation and should receive justice,” Hiram Sasser, First Liberty Executive General Counsel, said.

Emails from school district officials also revealed a negative bias toward Gideons International—a bias that likely influenced Walt’s firing, since he was a member.

In 2017, following nearly five years of litigation and negotiation, Walt was permitted to return to Phillipsburg School District as a substitute teacher.

Walt’s willingness to stand up for his faith set important precedents for workplace religious liberty and religious liberty for students and teachers in public school settings. The EEOC’s findings in this case confirmed that public employees must not be discriminated against for their religion. 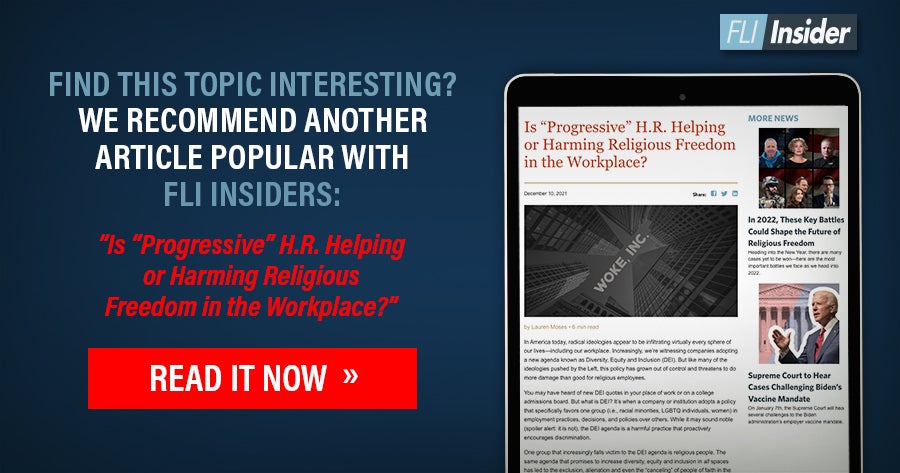 Remembering Walt as We Continue the Fight

Walt’s example of courage—and the precedent set by his victory—are especially relevant right now as we continue the fight for religious freedom in the workplace.

Like Walt, our client Coach Joe Kennedy was punished for living out his convictions as a public school employee—specifically for praying on the football field. His perseverance through over six years of litigation has brought his case to the U.S. Supreme Court, which is currently considering whether to take it up.

Our client Lacey Smith is also standing strong after Alaska Airlines fired her for expressing her religious beliefs.

Millions of Americans could soon be forced to choose between their religious beliefs or their livelihood due to President Biden’s employer vaccine mandate—a mandate that we’re challenging in court on behalf of three religious organizations. In fact, the U.S. Supreme Court heard oral argument on January 7th in several cases challenging that mandate on companies with more than 100 employees. The Court’s decision will have an impact on how much power the federal government can amass over individuals and businesses, including religious organizations.

Without Americans like Coach Joe, Lacey—and Walt—we could not defend America’s most fundamental freedom. It takes courageous people willing to stand up for their beliefs and Constitutional rights when challenged, so that the rest of us can live in liberty.

Thank you, Walt Tutka, for your example of faithfulness and courage in the face of religious discrimination. At First Liberty Institute, you will always be remembered.