The Supreme Court unanimously agreed that forcing the nuns to violate their faith is wrong, creating positive implications for pending First Liberty cases. 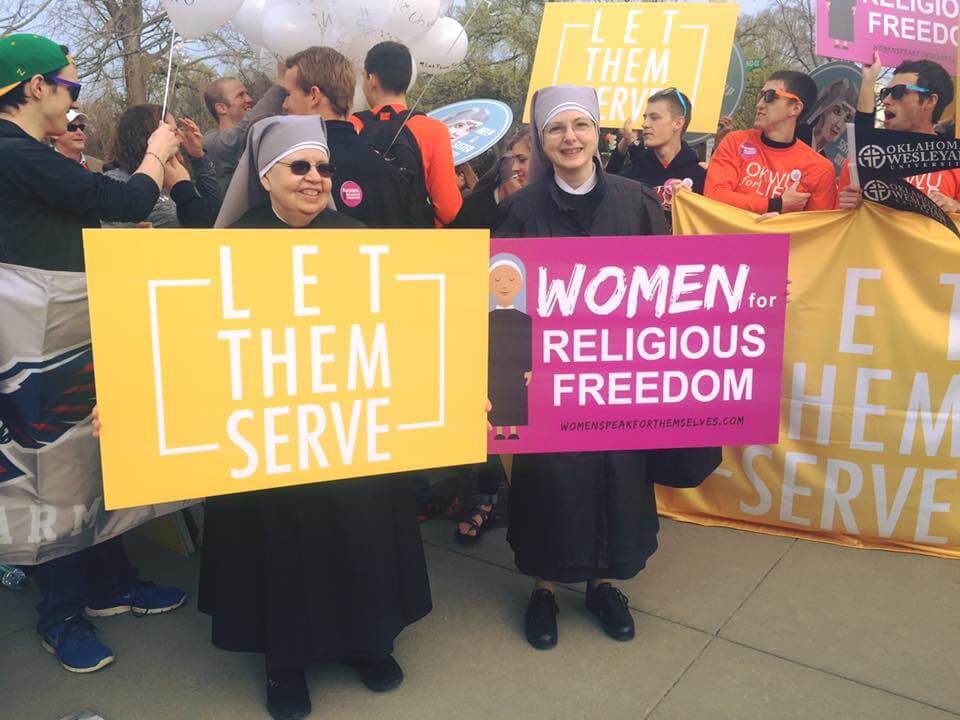 Though attacks to religious freedom may be increasing on all fronts, Americans of faith just won a major battle at the Supreme Court.

The victors? Faith-based ministries that refused to comply with the HHS “Abortion Pill” Mandate and violate their beliefs.

“This is huge for religious liberty,” said Kelly Shackelford, President and CEO of First Liberty, “and will positively impact First Liberty clients who are fighting for their rights against the federal government’s HHS Mandate.”

Just two months ago, The Supreme Court of the United States heard arguments in Zubik v. Burwell, a case that had millions watching to see whether the federal government could successfully force Catholic nuns to provide abortion coverage to their employees.

In addition to The Little Sisters of the Poor (the nuns), several other faith-based non-profits were consolidated into one lawsuit before the Supreme Court. Their lawsuit challenged the Health and Human Services (HHS) Mandate of the Affordable Care Act, or “Obamacare.” Even more faith-based non-profits, including First Liberty clients, supported the lawsuit through amicus briefs.

On Monday, May 16, the Supreme Court unanimously vacated all lower court decisions against the nuns and sent the case back to be worked out among the opposing parties, indicating that the Obama administration should find a way to provide insurance coverage for abortions, contraceptives and abortion-inducing drugs to employees without forcing the faith-based non-profits to do so against their beliefs.

Though the case is not exactly over, the Supreme Court’s action proves that in America, the law is still on the side of religious liberty—and makes a favorable outcome on behalf of the Little Sisters much more likely.

WHAT’S AT STAKE: THE IMPACT OF FAITH-BASED NON-PROFITS

The HHS “Abortion Pill” Mandate is a portion of the Patient Protection and Affordable Care Act, also known as the PPACA or “Obamacare,” that forces group health insurance plans to provide coverage for abortion-inducing drugs or devices. While churches, church denominations, and even some major national corporations are exempt from the mandate, faith-based non-profits are not, according to the Obama administration.

A ruling against the Little Sisters and in favor of the federal government would have been detrimental to thousands of religious ministries across the nation—and millions of men, women, and children as a result.

The impact of religious non-profit ministries of all kinds is too significant to be measured. Consider First Liberty’s clients alone:

But now, thanks to the Supreme Court’s ruling on Monday, the likelihood of a total victory in both of these cases is much stronger.

There is no denying that hostility to religious freedom is on the rise. First Liberty’s annual publication Undeniable: The Survey of Hostility to Religion in America records a doubling of attacks between 2012 and 2016.

But that doesn’t mean that all hope is lost. First Liberty’s staff attorneys handled over 500 legal matters in 2015, and still maintained a 90 percent victory rate.

“This nation was founded on the idea of religious liberty, and that idea still runs strong through the fibers of our nation,” Shackelford said. “Despite an increasingly hostile environment, religious freedom can win. The Supreme Court’s response in Zubik v. Burwell proves that.”