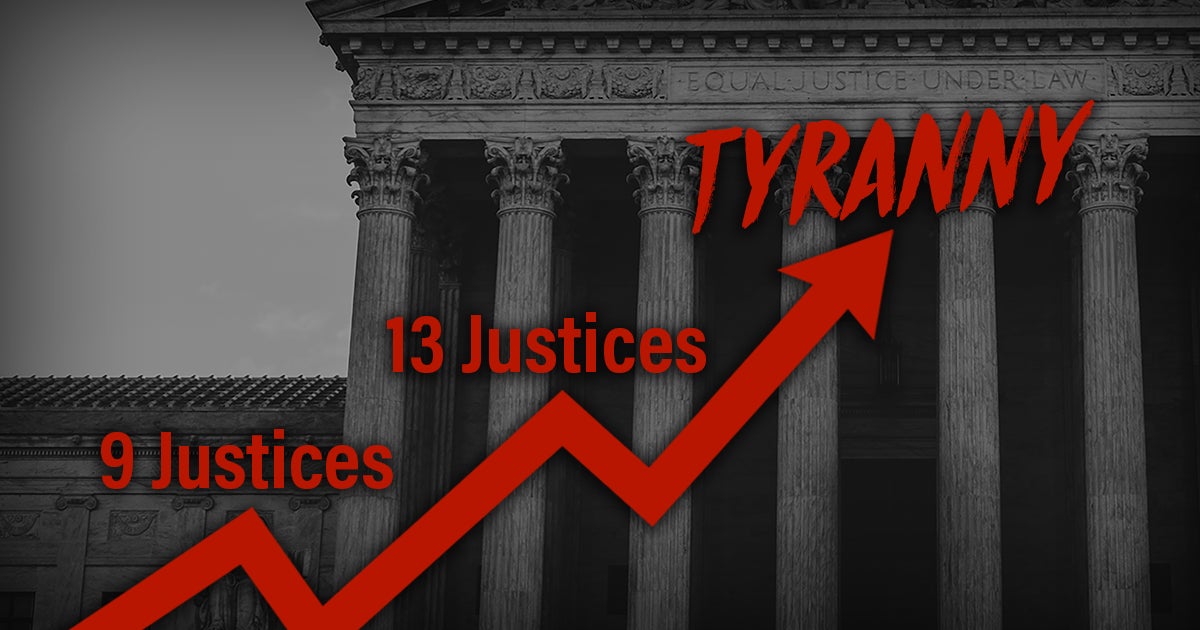 Millions of Americans are feeling the financial strain brought by inflation. With record high prices at the gas pump, the cost of groceries skyrocketing and the stock market sliding, analysts are predicting our economy won’t be getting better anytime soon.

But there’s another alarming kind of inflation that’s flying under the radar.

Some politicians are proposing that we inflate the Supreme Court by adding more seats. The price of this inflation isn’t monetary, however. If radicals succeed at packing the Court, Americans will end up paying a high price…one they’ll pay with their freedom.

As the adage goes, “Those who don’t know history are bound to repeat it.” And history couldn’t be clearer: court-packing is a move straight from a dictator’s playbook.

In 1989, the two houses of the Argentine congress passed newly-elected President Carlos Menem’s court-packing bill, and the decline began. Whereas the court had previously been the protector of human rights, Menem’s new court rubber-stamped various laws that violated human rights. The research group Freedom House summed up the state of the new court: “Overall, the judicial system is politicized, inefficient, and riddled with the corruption endemic to all branches of government.”

In 2004, dictator Hugo Chavez increased the size of the Venezuelan Supreme Court from 20 members to 32 and packed it with judges loyal to his party. The results were disastrous. The new court stripped the National Assembly of its powers, confiscated Catholic Church property, took over the media and stripped the people of their right to vote. Research reports show that of the 45,000 rulings issued by Venezuela’s high court since 2004, the court never sided against Chavez’s government after it was packed. Not once.

In 2010, the governing majority packed the Hungarian Constitutional Court, increasing the number of judges from 11 to 15. With their new “rubber-stamp” court, they passed laws limiting the free press, requiring the registration of churches and establishing control over 90% of the media. History tells us that increasing the size of the court consolidates power in a dangerous—and disastrous—way.

Politicizing a Branch that Should be Non-Political

Inflating the Supreme Court would undermine the judicial branch’s independence, a hallmark of our constitutional system. The Framers of the Constitution intended the judicial branch to be separate and insulated from the executive and legislative branches, as well as the whims of politics and public opinion.

The judicial branch was instated to make rulings based on the text of the Constitution and the law, not on the popular political views of the majority or the cultural orthodoxy of the day. In short, the purpose of the Court is to protect rights, not agendas.

“To call for the Supreme Court to be reformed for political reasons is to fundamentally misunderstand what the Court is and what it should do. It is a place where politics do not matter, and where the noise of public opinion has no place.”

“If anything would make the court look partisan, it would be [court-packing]—one side saying, ‘When we’re in power, we’re going to enlarge the number of judges, so we would have more people who would vote the way we want them to.’”

Adding four or more justices would only aggravate the problem of hyper-partisanship that’s infected the judicial branch in recent years. It would make the Court even more politically dependent on the next round of electoral results––which president occupies the White House, or what party controls the Senate.

Throughout our country’s history, the Supreme Court has been a bulwark that protects our fundamental freedoms: our freedom from unwarranted searches, our freedom to speak without retribution, our freedom to live according to our conscience. Packing the Court will come at the expense of our most cherished liberties, including religious liberty.

Court inflation elevates the risk of massive abuses of power. An independent judiciary is an essential check on the power of the executive and legislative branches. But if it’s rigged and stacked with judges from the dominant party, the judiciary would cease to be a protector of our rights and freedoms. Instead, it would be an extension of whomever holds political power. First Liberty attorney Jeremy Dys explains:

“If this politically motivated scheme to pack the Supreme Court is successful, the judiciary will no longer be a safeguard for our most treasured civil liberties: religion, speech, press, etc. Rather, it will be little more than a political tool of the executive and legislative branches, rubber-stamping political policies of the party in control of Congress and the presidency.”

More than 450,000 Americans have already made their voice heard by joining First Liberty’s national coalition of patriots who are saying “NO!” to court packing. With your help, we’ve already made a tremendous impact in stopping this radical scheme.

WE URGE YOU: Please share the truth about court-packing with your family, friends and coworkers. More Americans need to know the threat this scheme poses to our liberties. Together, we can help save the priceless heritage of the Supreme Court.