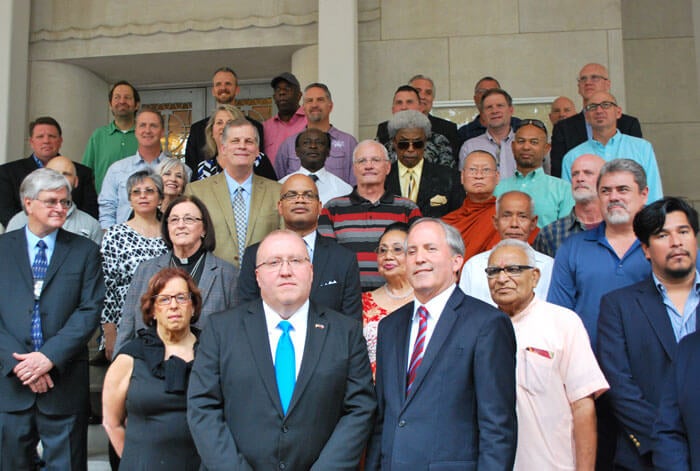 America’s tradition of public invocations is being challenged by the Freedom From Religion Foundation (FFRF) – a radical group desperately trying to erase the heritage of opening government meetings with invocations.

This time they have even attacked invocations offered by volunteer, multi-faith chaplains who comfort the grieving in their community.

Hear what Kelly Shackelford, President and CEO of First Liberty Institute, had to say about Judge Mack’s case:

Chelsey Youman, Counsel for First Liberty, responded to the ruling:

“If the U.S. Supreme Court and the Texas Supreme Court can open their sessions with prayer, why not Judge Mack? It’s a shame that a group from Wisconsin is wasting taxpayer dollars, forcing Montgomery County to defend something the Supreme Court of the United States has twice said is legal.”

First Liberty Institute previously represented Judge Wayne Mack in his personal capacity until he was dismissed from the suit in that capacity on January 10. However, the recent ruling from a federal district judge keeps the lawsuit open against the county.

Instead of violating the First Amendment, Judge Mack’s chaplains are taking part in a common, longstanding tradition alive since the Founding era.

Legislative prayer has been part of America’s traditions since the First Congress, which incorporated prayer at the start of official proceedings. Since the beginning of the republic, the practice of a short invocatory prayer has remained virtually uninterrupted. But now, atheist and anti-religion groups have made it their personal vendetta to extinguish invocations from America’s public meetings.

And there is more good news for Judge Mack and advocates of freedom. The Supreme Court has spoken twice on the constitutionality of this practice. The Court found in Marsh v. Chambers (1983) and Town of Greece v. Galloway (2014) that invocations before government meetings are fully consistent with the Constitution and an important part of America’s history and tradition.

Last year, First Liberty successfully defended Jackson County, Michigan, after it was sued by a plaintiff who contended that its commissioners led invocations that violated the Constitution. The U.S. Court of Appeals for the Sixth Circuit ultimately ruled in favor of the Board of Commissioners, affirming their practice of opening meetings with invocations.

Similarly, attorneys with First Liberty represent Rowan County, North Carolina, that was sued by the American Civil Liberties Union (ACLU) for opening sessions with a prayer. In that case, the U.S. Court of Appeals for the Fourth Circuit ruled that the legislative prayers led by the county commissioners are unconstitutional.

The differing decisions written by the Fourth and Sixth Circuits have created a “circuit split,” which has left two federal circuit courts with conflicting rulings. First Liberty petitioned the Supreme Court of the United States to clarify the circuit split, along with David Gibbs, III of the National Center for Life and Liberty, and Alliance Defending Freedom.

Along with Judge Mack’s case, the myriad of other similar cases reminds us that legislative prayer is a recurring and exceptionally important part of our history and tradition. The outcome of these cases could affect public officials – and millions of citizens – who value legislative prayer as a vital part of our American experience.