“One thing that will remain the same is our mission,” said Shackelford.

He added, “In fact, our new name is part of a significant step forward in our protection of religious liberty for all Americans through winning important, precedent-setting legal victories.”

AN ANSWER TO FAST-RISING HOSTILITY

The new name is partly an answer to a growing crusade by powerful secular institutions, activists, and opinion-shapers that claim it is time to downgrade religious freedom and values in American society.

For example, a New York Times writer labeled “religion” to be a “final holdout” and “stubborn refuge” of unlawful discrimination. He said biblical views must be constrained and restricted to “pews, homes, and hearts,” but otherwise kept private and irrelevant.

And a CNN anchor asserted, “Our laws do not come from God . . . They come from man.”

In the legal realm, the U.S. Solicitor General—in an argument before the U.S. Supreme Court last year—said faith-based tax exemptions for ministries who refuse to violate their conscience regarding marriage and sexuality will be “an issue.” And the Supreme Court will decide this year if ministries can be forced to facilitate abortions against their conscience or face crippling fines.

WHY RELIGIOUS LIBERTY MUST BE “FIRST”

“We chose the name First Liberty because too many Americans don’t realize that religious liberty is our first liberty,” said Shackelford. It is the first liberty mentioned in the first phrase of the First Amendment to the Constitution. It’s the liberty upon which all our other freedoms depend. Without open, free, and public religious rights, there is no accountability to a higher power, and the government can violate not only religious rights, but all rights.”

From the beginning of the American colonies through their maturity into a nation, a central principle of government has been religious freedom as a cornerstone of all freedom. Religious freedom points to a higher standard for right and wrong; a standard for preventing the powerful for crushing the weak.

“So this name educates Americans about the importance of religious freedom,” says Shackelford, “and at the same time immediately lets people know precisely what our mission is: First Liberty goes to court to protect this essential freedom for all Americans.”

Thank you, First Liberty supporters, for continuing to join arms with us as we march into a stage of greater impact for your first freedom.

Please visit the new First Liberty website for more information on this exciting and encouraging step in our growing mission: 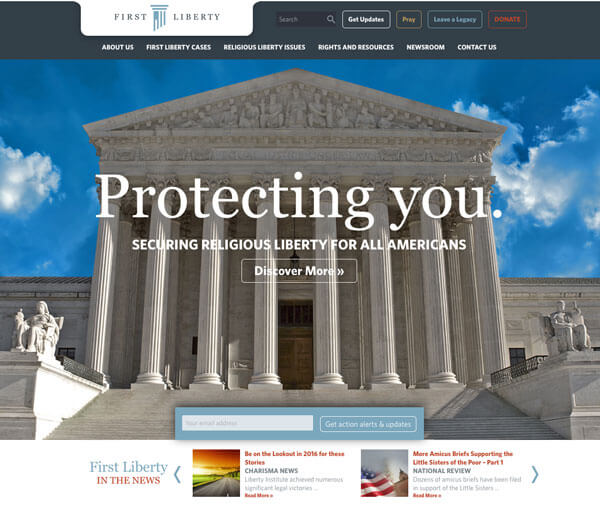 IN OR OUT? Texas Lt. Governor Asks Attorney General to Clarify Freedom for Chaplain Program and Prayer in Courts