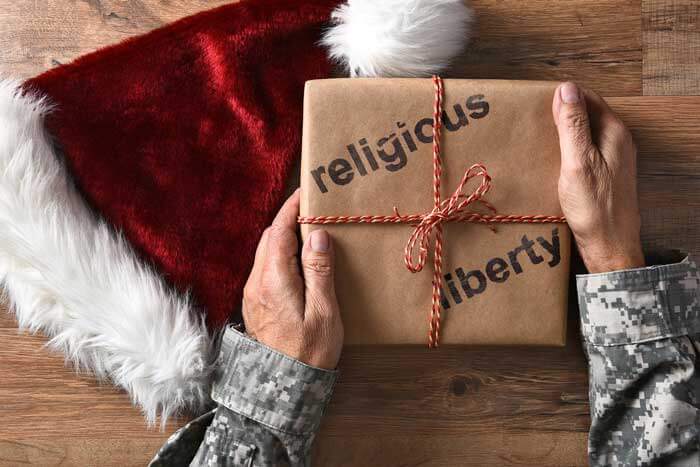 Christmas celebrations for hospitalized veterans will be a little merrier this year—because “Christmas” is now allowed.

The U.S. Department of Veterans Affairs (VA) has issued new guidelines in a recent memo regarding religious expression at its facilities across the nation. The new policy permits religiously-themed cards and gifts, Christmas carols, religiously-themed displays and appropriate greetings that can include “Merry Christmas” and “God bless you.”

“This is a 180-degree turnaround from our past dealings with the VA, and we believe we plowed much of the ground to get us here.”

“We are glad to see the VA has revised its policy on religious expression,” Berry added. “After many religious liberty battles with the VA, this is a step in the right direction. Our government should never take away religious freedom, especially from our veterans who sacrificed so much in freedom’s defense.”

Beyond mere Christmas greetings, the VA memo has also given the green light to allow the honoring of lost and fallen soldiers with prayer and Bibles on POW/MIA remembrance tables.

THE GRINCH WHO CENSORED CHRISTMAS

This is indeed a welcome victory, coming after contentious legal struggles and restrictions on religion that seemed cruel to veterans and contrary to the Constitution.

One such example of the VA’s typical treatment of religious expression came in 2013 when even Christmas cards were deemed too offensive for hospitalized veterans.

A group of 51 students from Grace Academy in Prosper, Texas, made Christmas cards for bedridden veterans at the VA hospital in Dallas and had intended to deliver them to their recipients. Rather than accept the act of kindness toward its recovering veterans, the hospital, citing its employee handbook, declined on the mere fact that the cards contained the phrase “Merry Christmas.”

Attorney Hiram Sasser, Director of Litigation for First Liberty, called the act a new low, “even for the Scrooges and Grinches at the VA.” His reaction echoed that of the parents of the Grace Academy students:

“Targeting the benevolent work of little children for censorship is disgusting. Do the Grinches in the administration of the VA really believe our bravest warriors need protection from the heartfelt well wishes of small children saying Merry Christmas? […] does the VA have no shame? Mr. Potter from ‘It’s a Wonderful Life’ wouldn’t even ban little children from wishing our veterans Merry Christmas.”

More than a mere shot across the bow in an ongoing culture war, the VA’s past censorship of anything too religious had gone too far, for too long. As a result of such discrimination, First established its Military Affairs Division, headed by former U.S. Marine Corps attorney Mike Berry, who still serves in the Marine Reserve and has served as an Adjunct Professor of Law at the U.S. Naval Academy.

Unlike any legal team in the country, the Military Affairs Division at First Liberty was designed specifically to combat the attack on religious liberty in the military and retired veterans—giving legal protection to active and retired service personnel. This even includes fighting for veterans memorials targeted by organizations like the ACLU due to traditional religious expression such as crosses.

It’s uncertain what triggered the VA’s turnaround. But the origins may lie, in part, when First Liberty confronted the VA in what became a major federal court showdown in 2011.

The battle commenced on the grounds of the Houston National Cemetery, where Pastor Scott Rainey had been effectively prohibited from referencing “Jesus” in his prayers at a Memorial Day Ceremony in 2011.

First Liberty represented Pastor Rainey and, upon investigation, uncovered multiple additional religious liberty violations taking place. The facts were shocking. Grieving families were even prohibited from burying their loved ones according to their religious beliefs and convictions, including receiving condolences from funeral personnel such as “God bless you.” In addition, the chapel had been shut down.

After a court battle, a federal judge issued a rebuke to the VA, and the cemetery’s policies were reversed. This created a precedent which rippled across the U.S. Department of Veterans Affairs to prevent similar actions in other VA cemeteries.

First Liberty’s advocacy on behalf of service members and veterans is changing the landscape within our nation’s military regarding religious liberty. With your help, we are restoring religious freedom to its rightful place as a revered and central component of our diverse nation and our rich military history.

Now the task is to be vigilant and make sure VA facilities follow the new guidelines. First Liberty encourages the public to notify us of any possible violation.

And for the moment, let us celebrate a most “Merry Christmas” in VA hospitals.