More Flips in the Future? Find out Which 3 Appellate Courts the Trump Administration Could Flip Next 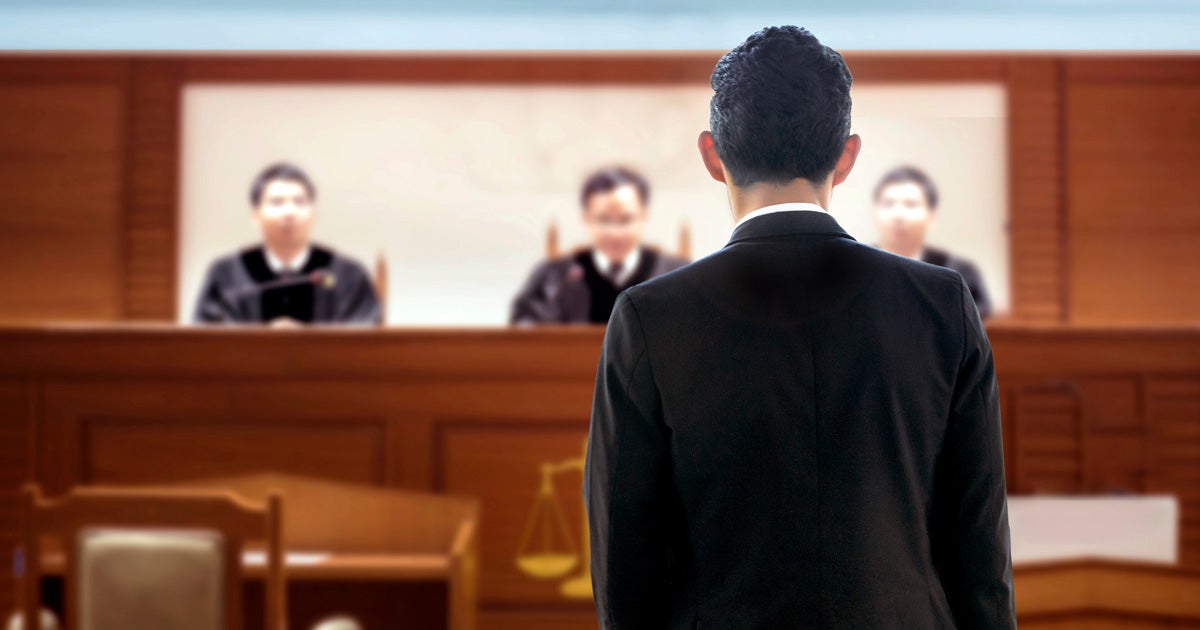 When President Trump and his administration took office, they had their work cut out for them. They inherited a total of 108 federal judicial vacancies that needed to be filled.

And the President and his team rose to the challenge, filling vacancies at a record rate. Even more impressive, we continue to see the administration’s unprecedented success at nominating and confirming conservative judges who will uphold the original meaning of the Constitution, and of course, the First Amendment.

As of today, the current administration and the U.S. Senate have worked together to confirm a total of 112 federal judges, including a staggering 41 judges confirmed to the U.S. Circuit Courts of Appeals.

In fact, 41 confirmed appellate court judges is a record-breaking figure that we haven’t seen in over 60 years!

A review of judicial confirmations for the past 12 presidential administrations in their third year shows that the current administration outpaces them all. As of May of this year, 41 appellate court judges have been confirmed, a number that far exceeds the prior record of 25, held by President Richard Nixon’s administration.

With that many appellate court confirmations, it is no surprise that earlier this year the President was able to “flip” the U.S. Court of Appeals for the Third Circuit to have a majority of conservative-appointed judges seated on the bench.

The Eleventh Circuit: 1 vacancy away from a flip

Once one of the liberal-appointed judges retires, the President can to put forth one of his conservative nominees as a replacement. Under that scenario, the court will have a 7-5 majority of conservative-to-liberal appointees.

Here’s why circuit flips are important to your first freedom. When deciding a case, appeals courts typically choose a three-judge panel at random from its list of judges. So if the ratio of conservative-to-liberal appointed judges is closer to 50-50, then there’s a higher probability that a conservative judge will hear and rule on cases according to the original text of the Constitution and the First Amendment. 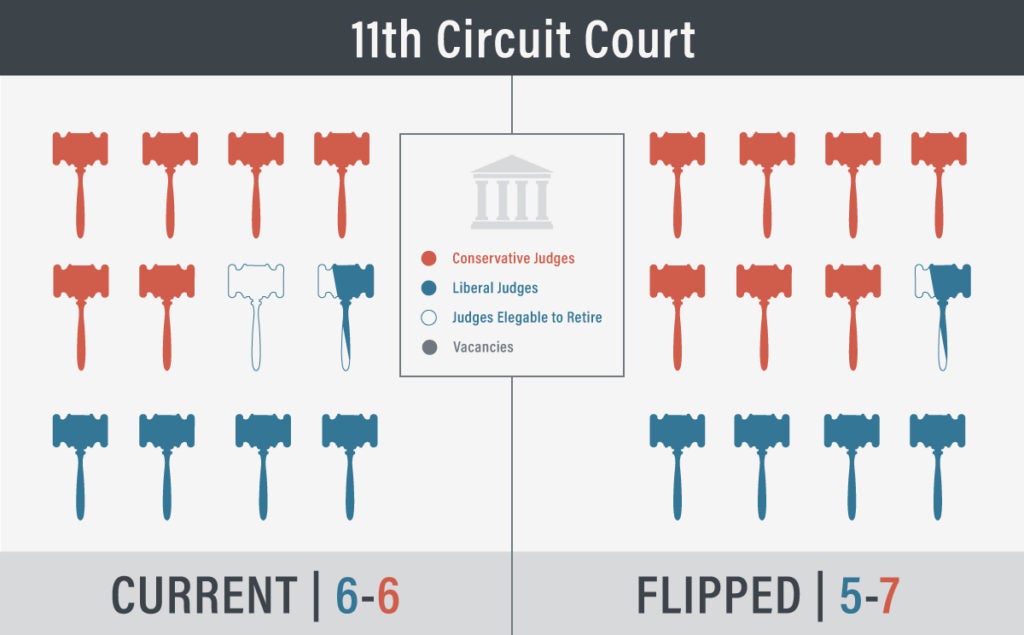 The Second Circuit: 1 vacancy away from a flip

A similar scenario could play out in the Second Circuit, where two appointees of the current administration were recently confirmed to the court, bringing the conservative-to-liberal ratio to just 6-7, respectively. Four liberal-appointed judges in this circuit are currently eligible to retire with one more who may be eligible soon. If only one of these liberal-appointed judges chose to retire, it would create an opportunity for the president to nominate a replacement, bringing the conservative-to-liberal majority to 7-6.

Right now, our attorneys are litigating a case within the jurisdiction of the Second Circuit. We are fighting a district court battle to protect the rights of the Orthodox Jewish community in Airmont, NY because city officials refuse to grant them approval to host religious gatherings in their private homes. If the district court doesn’t vindicate their rights, the case will likely be appealed to the Second Circuit, and the composition of that appellate court would have a profound effect on the final outcome. 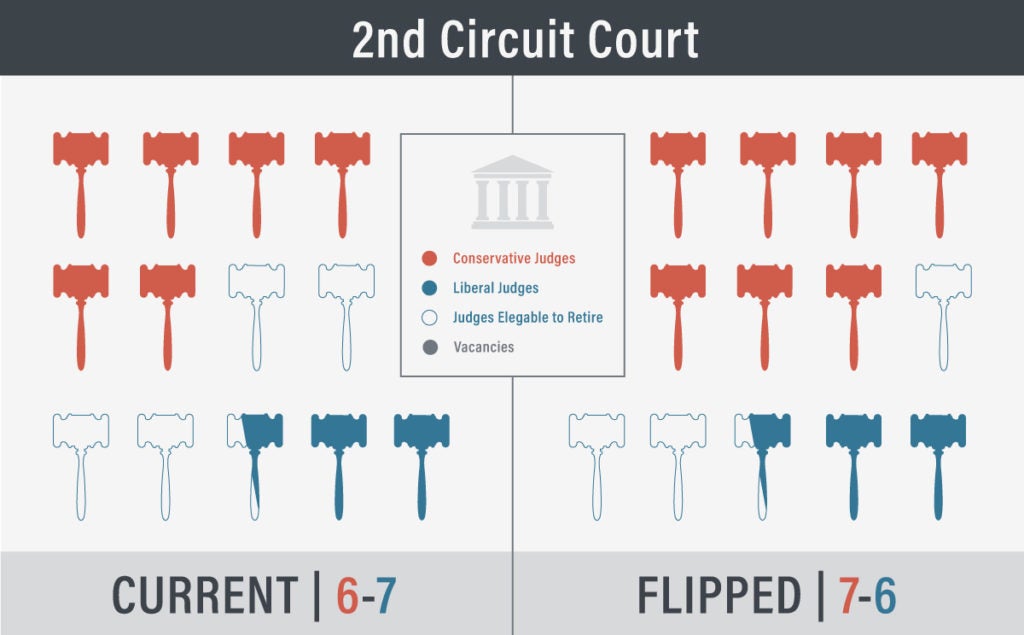 The Ninth Circuit: A dramatic change looming in the near future?

Finally, there is a possibility for dramatic change to the Ninth Circuit. Recent confirmations of Trump nominees to this court brought the balance of liberal-to-conservative judges to 16-11, respectively.

Right now, there are two vacancies that the President could fill. If his nominees are confirmed, it would further improve the margin to 16-13, liberal-to-conservative.

But the game-changer for this circuit are the eight liberal-appointed judges who are eligible to retire. If two of those choose to retire from the bench, then it would be enough for the current administration to fill the vacancies and flip the liberal-judge stronghold that is the Ninth Circuit.

Remember that a three-judge panel of the U.S. Court of Appeals for the Ninth Circuit issued the outrageous ruling that Coach Joe Kennedy did not have a constitutional right to privately pray on the field after football games. If Coach Kennedy’s appeal were heard today, there would be a greater chance of drawing a panel with at least one or two conservative judges on it. Imagine the difference that would have made not only in his case, but in many future religious freedom cases litigated in the Ninth Circuit! 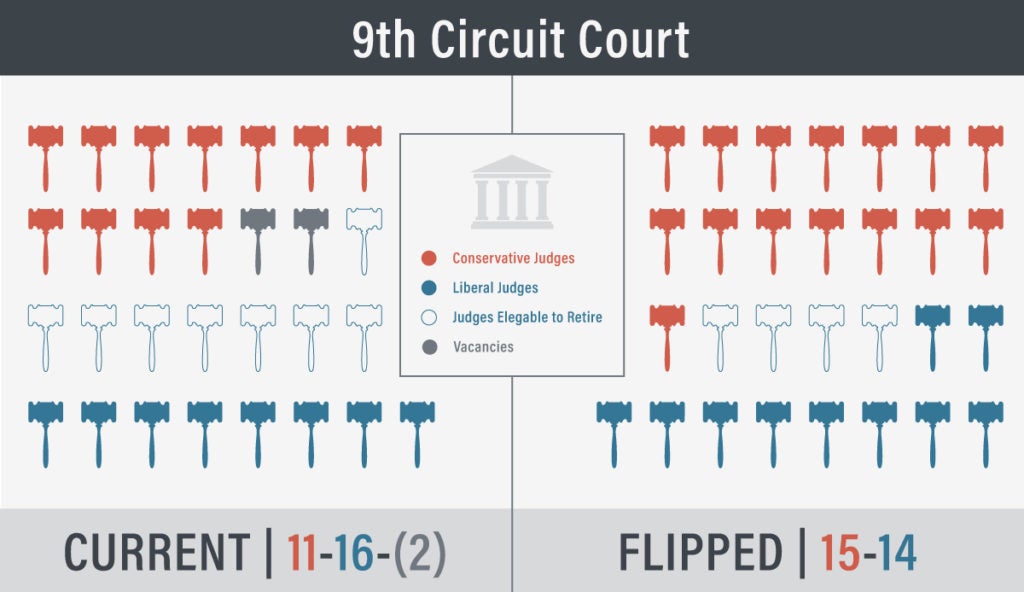