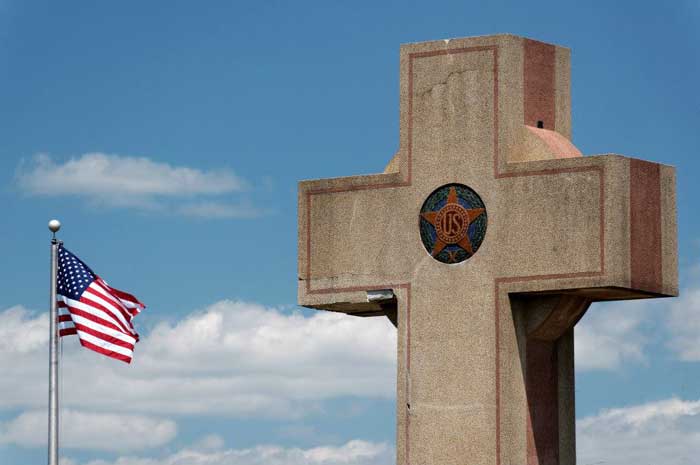 At the corner of Bladensburg Road and Defense Highway in Bladensburg, Maryland, stands a reminder. A large memorial in the shape of a cross bears the names of 49 men of Prince George’s County, Maryland, who gave their lives pushing back the rise of tyranny in the conflict of World War I.

Yet now the memorial itself faces a new kind of tyranny.

Beginning in February 2014, the Bladensburg Memorial came under siege by the American Humanist Association (AHA), which seeks to have the monument permanently altered, demolished, or removed from its home of 90 years due to its cross shape.

This past Wednesday, one of First Liberty’s top volunteer attorneys from the prestigious law firm of Jones Day, joined by First Liberty attorneys, stood before the U.S. Court of Appeals for the Fourth Circuit to give oral arguments in the continuing effort to save the Memorial. First Liberty and Jones Day represent The American Legion in the case.

Ironically, the date was December 7, when veterans and all Americans remember the horrific attack and loss of lives at Pearl Harbor 75 years ago.

“THE ALTAR OF FREEDOM”

The Bladensburg World War I Veterans Memorial has stood since 1925 in remembrance of those 49 service members of Prince George’s County who, as Abraham Lincoln once wrote of those who fall in war, “Laid so costly a sacrifice upon the altar of freedom.”

The Memorial was owned and erected by The American Legion but now is owned by a state agency due to road development. It stands in a roadway median in Bladensburg’s Veterans Memorial Park surrounded by other veterans memorials and a memorial garden to the fallen of September 11, 2001.

The AHA claims the cross shape of the memorial violates the Establishment Clause of the First Amendment of the Constitution. When the U.S. District Court for the District of Maryland ruled the memorial constitutional in November 2015, the AHA appealed the decision to the U.S. Court of Appeals for the Fourth Circuit.

“We are honored to stand with The American Legion today in defense of our nation’s most sacred monuments honoring those who served. Their sacrifice deserves our lasting gratitude, not lawsuits against symbols to their honor. But we are proud to have once again made a strong defense on their behalf.”

The Bladensburg case marks just one of the many deliberate and recent attacks by special interest groups upon the traditional use of a cross to honor veterans. Yet this is an especially crucial confrontation for the future of such memorials.

For example, the historic Mt. Soledad Veterans Memorial cross in San Diego, California came under fire by the American Civil Liberties Union (ACLU), which claimed that the memorial violated the Establishment Clause. First Liberty defended the memorial on behalf of its designated caretakers and prevented the cross from being torn down.

The Mojave Desert Veterans Memorial Cross in California was likewise threatened by the ACLU. First Liberty represented the Veterans of Foreign Wars, The American Legion, and others in defense of the memorial. The memorial was transferred to private ownership and still stands today.

The use of a cross to honor fallen soldiers is part of America’s rich heritage and in no way violates the Constitution. Rather, the “search and destroy” mission of groups such as the AHA and ACLU asks our courts to exhibit the very hostility to religion the Establishment Clause is meant to prevent.

“Shall we strip from public display every memorial that uses a cross or similar image, and with it the dignity of those honored, in an effort to cower to special interests?” asked Hiram Sasser, First Liberty’s Deputy Chief Counsel. “At what point will our nation’s historic monuments resemble nothing more than a cold and codified evisceration by a secular state?”

According to the Washington Post, at one point in the hearing, the lead attorney for those opposing the memorial said she would support removing the arms of the cross.

Sasser noted the irony of the most current attack upon the veterans memorial at Bladensburg falling on the anniversary of Pearl Harbor. While the first battle sought to end the lives of service men and women, the current legal battle seeks to chip away at their memory and desecrate even their remembrance in the public square.

“It was surprising,” Sasser said, “to hear a suggestion, on Pearl Harbor Remembrance Day, that it may be appropriate to disfigure a 90-year-old veterans memorial.”

Much is riding on the decision. If the courts were to overrule the constitutionality of such a display, the ruling would create a dangerous precedent which could lead to the destruction of national monuments even more notable, such as the Argonne Cross and Canadian Cross of Sacrifice at Arlington National Cemetery.

We must stand our ground. We must emulate the tenacity of those who paid the ultimate price for our freedom, the very freedom that allows us to honor their memory with reverence and sincere gratitude.