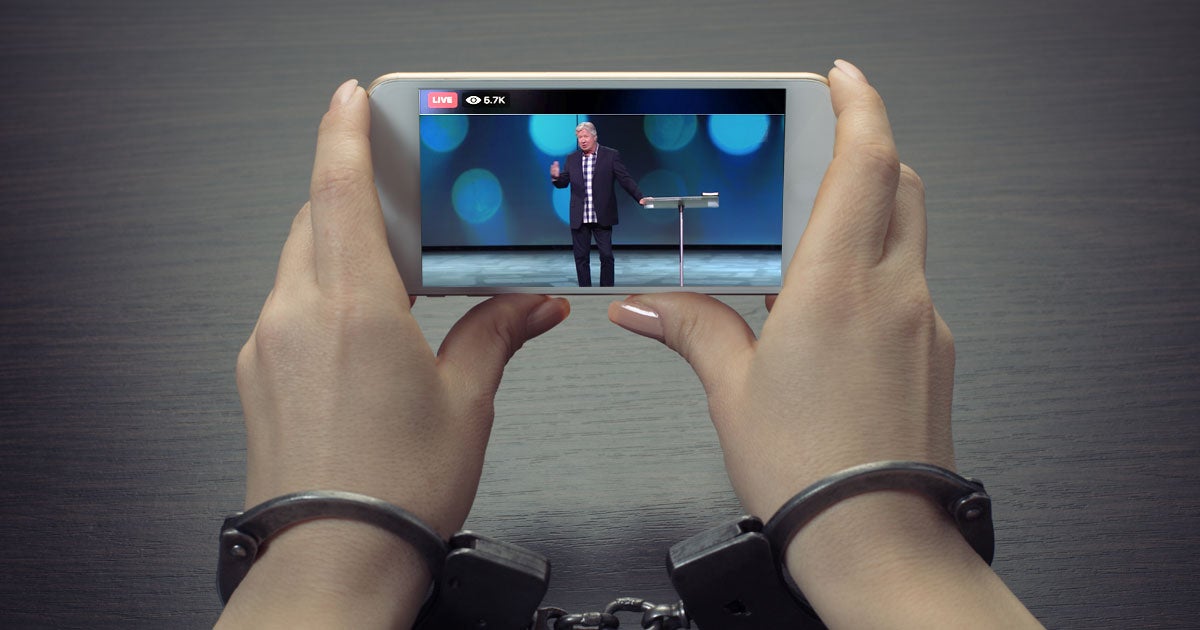 Let’s start by giving credit where it’s due.

It’s admirable that houses of worship can adapt so quickly in times of crisis. Millions of Americans are staying spiritually engaged thanks to the incredible effort of churches and faith leaders who harnessed the power of technology, social media and the Internet. Even more remarkable is that churches surpassed virtual attendance records even though the quarantine forced them to transition overnight to online services.

Indeed, we’re thankful for online church. Yet, we must see that “faith in a screen” can be a double-edged sword.

Watching and participating in religious services on a digital platform makes sense temporarily during this time of social distancing. However, if people of faith get too comfortable to this “new normal” of having church online, they may not realize just how much of their religious liberty they’re giving up.

Let’s explore why “online church” could be harmful for religious liberty in the long-term.

Freedom can be fragile in times of crisis.

Protecting our God-given rights starts by knowing the Constitution.

Get your own FREE pocket Constitution

Online church is indeed a blessing in this unique time. However, by relying too much (or exclusively) on online church, we may be missing out on a whole other side to religious liberty.

The Constitution guarantees the freedom to express and exercise our religious beliefs without having to be confined to the four walls of a church…meaning we have a protected right to take our beliefs into the public square.

So, if online church becomes a permanent “new normal,” we’re basically giving up a significant part of our rights and limiting our religious liberty to the four corners of a screen.

This is where it’s helpful to understand the original intent of America’s Founders when they drafted the Constitution.

Those who influenced the creation of the First Amendment (iconic masterminds of religious liberty like James Madison and Thomas Jefferson) didn’t have the same level of technology, or social media outreach, that we do today.

But they had their own powerful form of social networking: the newspaper.

The newspaper was critical in early American history as an informational channel, and a social and religious connector. Historians cite an “information explosion” during the Revolutionary Era, with over 100 newspapers circulating across the colonies during the late 1700’s. Newspapers and political pamphlets were central in shaping public opinion during the Constitutional Convention. (For history buffs, recall how influential Thomas Paine’s Common Sense was in this era).

In fact, religious belief was so prevalent during the period in America’s Second Great Awakening (1800-1830) that it spurred the widespread publication of religious newspapers of multiple denominations.

It’s no surprise why the Founders made sure to include specific, enumerated protections for free speech and freedom of the press in the First Amendment.

Of course, free speech—which includes religious expression and viewpoints—couldn’t, and shouldn’t, be limited to the folds of a newspaper.

What it Means to Fully Live Out Your Faith

The Founders’ original intent in writing the First Amendment’s protection of religious liberty was for faith to be lived out.

Quite literally, this meant expressing and living according to your beliefs outside the word limits of newspaper columns. It also meant religious expression wasn’t confined to the walls of a church. We have a protected right to actively take faith out into the public square, whether in school, a public park, a government building, in a military unit, etc.

For us today, looking back at our country’s history should help us understand that online church—a key religious and social connector in our time—is just one aspect of how our nation embraces religious liberty.

Yes, online church is a beneficial resource under current public health restrictions, and we should protect religious freedom in the digital space, as First Liberty has done before.

But we need to be cautious. This mode of religious expression shouldn’t become a primary and permanent channel of religious life. People of faith shouldn’t be confined to living out their faith on a screen.

Together, we can ensure America’s First Freedom continues to thrive for decades (and possibly centuries) to come. This starts by getting “Back to the Constitution,” remembering that America’s promise of religious liberty extends far beyond the bandwidth of a smartphone, a tablet, YouTube videos or Facebook Live.