In a survey published earlier this month, Pew Research Center examined reasons behind online harassment. Their research shows that nearly one in five Americans who experienced online harassment believe it was because of their religion.

According to the survey, forty-one percent of American adults say they have been harassed online. Nineteen percent of those say it’s because of their religion. As Pew notes, that’s actually a significant portion of Americans in general:

“When looking at Americans overall—not just those who’ve been harassed online—that share is equivalent to 8% of the overall population.”

Pew’s survey is not the only one to find evidence of hostility to religion online. Pew researchers noted the following:

Another study by the Cyberbullying Research Center found that notable portions of American teens have experienced cyberbullying because of their religion. Issues around online harassment have drawn the attention of the Inter-Parliamentary Task Force to Combat Online Antisemitism and the Vatican. 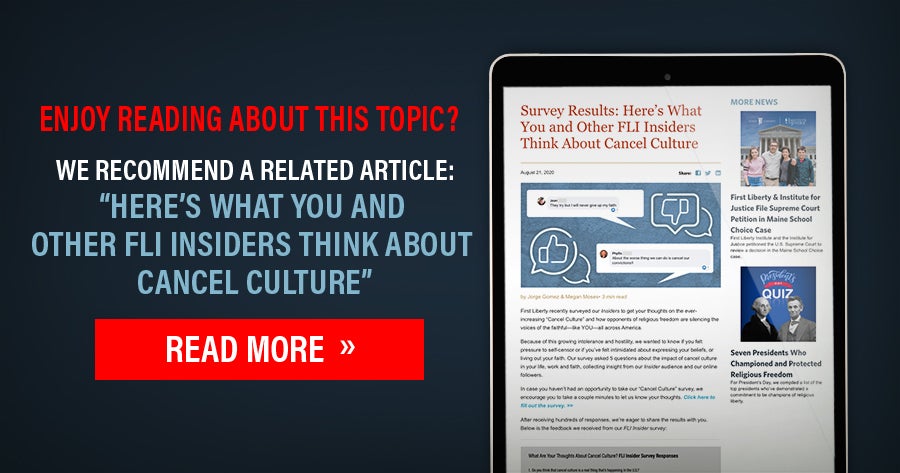 According to the data and studies published on this issue, it seems as though harassment of people who hold non-mainstream views is quickly becoming the new normal.

Despite years of activist groups advocating for tolerance, fewer and fewer people know how to tolerate any worldview other than their own. If your beliefs land outside what is considered culturally acceptable, you run the risk of being “canceled”—banned from the public square and censored for life.

Why is online harassment problem? Because displays of hate and bigotry online due to someone’s religious beliefs are just another form of discrimination. Harassment and religious discrimination (which is illegal) typically follow each other closely.

Consider First Liberty’s client Melissa Klein. Because she wanted to run her business consistent with her religious beliefs, the State of Oregon “canceled” Melissa by levying a crippling financial penalty that forced her to shut down her family bakery, SweetCakes by Melissa.

After getting canceled by the state, it didn’t take long for the hate to surface online, as she was attacked by a mob of online harassers. Some even sent death threats. Here are some of the vile comments Melissa received on Facebook (warning—they’re troubling to read):

We need only to look at the Founding Era to see that one of the most essential pillars of our republic is its protection of religious minorities, those with viewpoints that differ from the majority or the cultural orthodoxy. And as America continues to grow and become more diverse, protection of minority beliefs is especially vital.

Hiding behind a screen and attacking people because of their religious beliefs serves no good purpose. Like cancel culture, or the censorship of religious voices in the digital space, online harassment is toxic to America. It’s destructive to the foundational values of religious freedom and free expression—and though religious Americans are the targets of vile attacks right now, this will only lead to more oppressive and ugly forms of retaliation against anyone who dissents from the popular opinion of the day, whether they’re religious or not.

Your Thoughts on Online Harassment

Please take a moment to share your thoughts with us regarding online harassment.