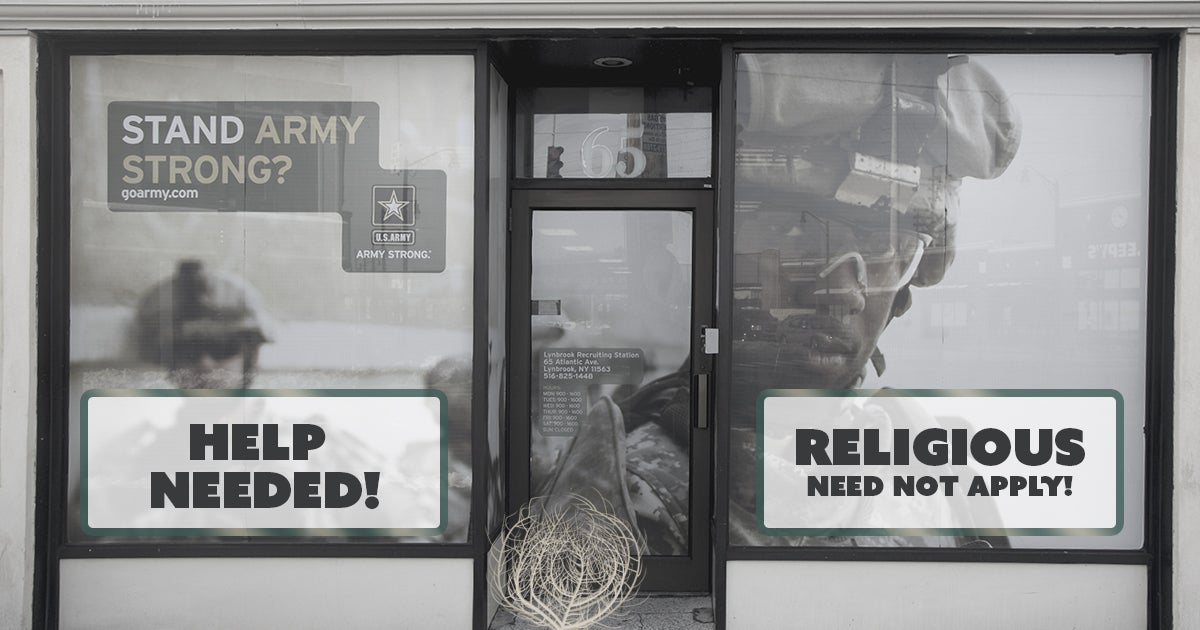 The Biden administration and Pentagon officials persist on a vindictive and punitive approach toward military service members who’ve requested religious accommodations to the vaccine mandate. These discriminatory actions continue to impact thousands of our men and women in uniform—including our Navy SEAL and Air Force clients—who still face mistreatment, punishment, involuntary separation and the threat of losing their careers and their livelihood.

This, however, is not just a serious problem for individual service members seeking to serve in a manner consistent with their faith; religious discrimination is also negatively affecting our country’s safety.

First Liberty attorney Danielle Runyan explained in a recent Fox News op-ed that the vaccine mandate is having a “perilous impact” on national security:

“The unrelenting push to remove thousands of religious service members from the military for their sincerely held objections to taking the COVID-19 vaccine should be classified as a clear dereliction of duty by the Biden administration…At this point, the Department of Defense should be more concerned with its own 100% compliance with the Constitution rather than 100% vaccination compliance. How will religious liberty ever be preserved if our own executive branch is permitted to overtly dishonor it?”

Runyan also pointed to a recent decision from the U.S. Court of Appeals for the Fifth Circuit that helped reveal the true objective. In a concurrence, Judge James C. Ho concluded that “the real reason for the vaccine mandate and indefinite unpaid leave policy is ‘virtue signaling’ and ‘currying political favor.’”

A military that’s focused more on promoting woke political ideology than protecting the fundamental religious liberties of America’s service members is doing a disservice to America’s national security—beginning with recruitment and enlistment efforts.

The administration’s woke policies already appear to be deterring people from signing up for duty. The Army Times reported that “the Army missed its recruiting goal by about 15,000 new soldiers in 2022, coming up 25% short of its goal at a time when each of the services were struggling to meet their benchmarks.”

Thomas Spoehr, director of the Center for National Defense at The Heritage Foundation, explains:

“The largest threat they see by far to our current military is the weakening of its fabric by radical progressive (or ‘woke’) policies being imposed, not by a rising generation of slackers, but by the very leaders charged with ensuring their readiness…Wokeness in the military also affects relations between the military and society at large. It acts as a disincentive for many young Americans in terms of enlistment.”

Consider how devastating this woke infiltration is for people whose faith motivated them to join the military. Department of Defense (DOD) data shows that that nearly 70% of military service members identify as people of faith. But as this intolerant and anti-religious agenda continues to take hold, religious Americans could be discouraged from volunteering and enlisting to serve.

Even before the founding of our great nation, faith and religious freedom have been inseparable from the military. From our Founders to our present leaders, our nation has always taken deliberate steps to meet the spiritual and religious needs of the men and women serving in uniform. Religious Americans should not be told that they need not apply for military service, and those with religious convictions who are already part of our nation’s fighting force should not be kicked out, discriminated against or threatened because of their beliefs.

The bottom line is this: a woke military is a weak military. Wokeism won’t make our armed forces more prepared for war. It will only sow division and undermine our military preparedness. Instead of helping the DOD focus on its national defense mission, the woke commissars are doing more to distract our military by using the armed forces as a testing ground for social policy experimentation. America’s external enemies want nothing more than to see us distracted by playing politically correct games, rather than focusing on defending our nation against the very real threats to our freedom.