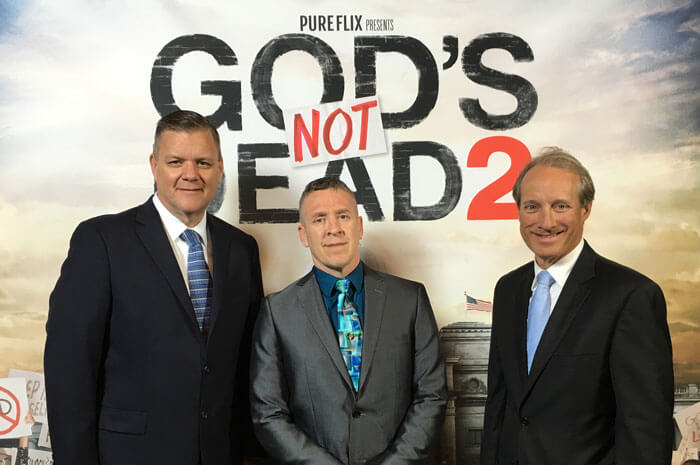 God’s Not Dead 2 tells the fictional story of Grace Wesley—a public school teacher and a Christian who faces religious discrimination and hostility for mentioning Jesus in the classroom. While many might say, it’s just a movie, hundreds of Americans like Chaplain Modder and Coach Kennedy are facing similar trials every day.

In March of 2015, Chaplain Modder was nearly kicked out of the Navy for sharing his biblical beliefs in private counseling sessions. He finally achieved victory and returned to his duties after a months-long legal battle.

In October of 2015, Coach Kennedy was suspended from his coaching job for personally praying at the 50-yard line after football games. His legal battle is still ongoing, and he hasn’t been allowed to coach since his suspension.

Their stories are real, and only a few of many.

Watch the trailer for God’s Not Dead 2!

The fictional character’s battle is strikingly similar to one faced by a First Liberty’s client just three years ago.

Walt Tutka was terminated in 2013 for giving a student a Bible.

While holding open the door for a student one day, Tutka, a longtime substitute teacher, commented to the student, “the first shall be last, but the last shall be first.”

On October 15, 2012, Phillipsburg School District abruptly suspended Tutka’s employment for giving the student his Bible. On January 14, 2013, the school board terminated him.

First Liberty Institute represented Tutka and filed a charge of discrimination against the school district with the U.S. Equal Employment Opportunity Commission (EEOC). After a thorough investigation over almost two years, the EEOC issued a final determination letter in favor of Tutka.

Attorneys at First Liberty are still awaiting further action by the EEOC, however, which they hope will lead to the ultimate resolution of this case.

Other First Liberty cases involving schools and colleges include:

“God’s Not Dead 2 does a terrific job of depicting the kind of battles our clients face in real life,” said Kelly Shackelford, First Liberty President and CEO, who attended the Los Angeles premiere.

“I hope that by seeing this movie, more Americans will realize the magnitude of the hostility so many people of faith are facing right now, and that our religious freedom is meaningless unless we are willing to take a stand,” he said.

God’s Not Dead 2 will open in theaters nationwide on April 1.

The DVD release, set to come later this year, will feature a special video from First Liberty Institute explaining the very real fight for faith that America faces today.

“It’s time people realize that the battle for religious freedom in America is real,” Shackelford said. “This movie is helping to spread the message about that.”