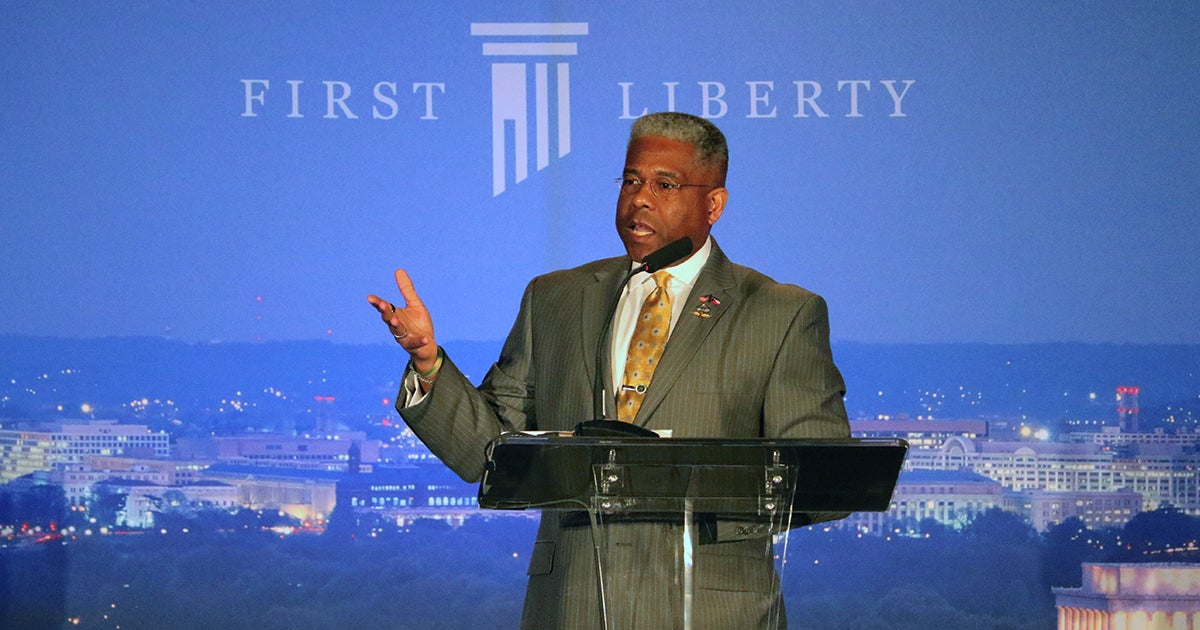 We recently had the privilege of sitting down with one of your fellow First Liberty supporters, U.S. Army Lt. Col. Allen West (Ret.).

Not only is LT. Col West a distinguished veteran who served his country for over 20 years, he’s also a courageous man of faith who continues to make an impact through his passionate speeches, encouraging Americans to value freedom and to take a stand when our liberties are attacked.

In this exclusive, one-on-one interview, we had an opportunity to talk in-depth about his military career, what prompted him to continue serving as a member of Congress and why religious freedom is the cornerstone freedom we have as Americans.

Q: What made you join the military?

I come from a military family. In total, four generations who’ve all served as combat veterans.

My father was a corporal in the U.S. Army in World War II and my older brother was a Marine infantryman in Vietnam. At the age of 15 my dad challenged me to be the first officer in the family. So I embarked upon that in high school by joining Junior ROTC and continued on through the ROTC Army program in my university. I was commissioned as an officer on July 31, 1982. And now my nephew, my older brother’s son, is a major in the Army as well.

Q: How long were you in the Army?

I served for 22 years, and traveled across 13 different countries and 3 combat zones. Time does fly, though. I retired as a Lieutenant Colonel and I’ve been out of the military now for 15 years.

Q: Tell us about any military experiences that deeply impacted you or even changed your life.

Well, for one being shot at will definitely change you. But the most important lesson I learned throughout my career is that leaders never take credit. They take responsibility. Serving is not about you, but rather about you sacrificing for others. And I find that in Scripture, which says “Greater love has no one than this: to lay down one’s life for one’s friends.” And that is really what being a soldier, sailor, airman or coastguardsman is all about – putting your life on the line for others.

Military service members sacrifice greatly for our freedoms. Give today to help protect their freedom.

Q: Did you lose any fellow Army brothers while in combat?

Thankfully, when I was a battalion commander we lost no soldiers in any combat engagement. They were incredible soldiers. They were well trained and very disciplined.

But to answer your question, yes I did see casualties. One of the hardest incidents we had was a young man and his best friend, his battle buddy, who were about to go on a night patrol. They were cleaning their guns and one of them had not done a proper weapons check. He had a round in the chamber in his M16 and accidently shot his friend. That was really horrible for our unit and it was a tough thing to get through.

Q: What made you run for Congress and pursue public service after the military?

It was honestly a natural extension of my time in the Army. At one time people in this country did not look to anyone to be an elected official unless they had served in uniform first. I think that people who have taken the oath and have been willing to lay their lives down for our country really know what it means to be a servant leader. Their sacrifice and commitment shows that they’re less worried about special interests, and more concerned with America’s interests.

Q: Why do you think it is so important to remember our fallen heroes?

I recently watched the movie They Shall Not Grow Old, where they took original WWI footage and added color, sound and voices. It was an incredible film. It leaves you with tears in your eyes because that generation of servicemen has been long gone. I think the last WWI veteran passed away more than 10 years ago.

It makes me think of the Bladensburg WWI Veterans Memorial. I can’t believe some people drove by that memorial and said they were offended. And then to have to go all the way to the Supreme Court to stop it from being destroyed. To me, that’s just despicable.

That’s why we have to fight. We have to make sure that the sacrifice of the 40 plus men from Maryland is not forgotten. And I’m so thankful that First Liberty exists to litigate those kind of cases.

Q: From your perspective, why is it important to protect religious freedom?

The Founding Fathers looked at what had happened in England when the head of state declared himself the head of the church, and the kind of persecution that led to. They understood that your earthly freedoms really begin by having spiritual freedom.

Thomas Jefferson, James Madison and the other Founders understood that government had to be subservient to the rights and freedoms of the individual. But now we see persecution happening because government is taking political ideology and proclaiming it as the “religion” you must believe in. Just look at what happened to the Little Sisters of the Poor, Hobby Lobby, Jack Phillips from Masterpiece Cakeshop and, of course, Sweet Cakes by Melissa in Oregon.

That’s what makes protecting that very first freedom so important. This country was birthed out of a desire to have spiritual freedom.

Q: What words of encouragement would you give to those who have been attacked for living out their faith?

I would tell them to be strong. That’s why we have firms like First Liberty, who have their back. And know that when you stand on the side of right, right will always prevail. That’s a big part of my faith – knowing that light will always drive out darkness.

Be the first to receive more exclusive interviews. Become an Insider today.