Restructure the Supreme Court?…See What First Liberty Supporters Had to Say A few weeks ago, we created a poll exclusively for our Insiders, asking YOU about key issues facing the Supreme Court.

The survey was simple: We asked a few questions about the influence of politics on the Supreme Court, and whether or not the High Court needed to be restructured, including the possibility of increasing the number of Justices.

Hundreds of First Liberty supporters weighed in, and we’re excited to share the results of what they had to say about the Supreme Court in our present time: 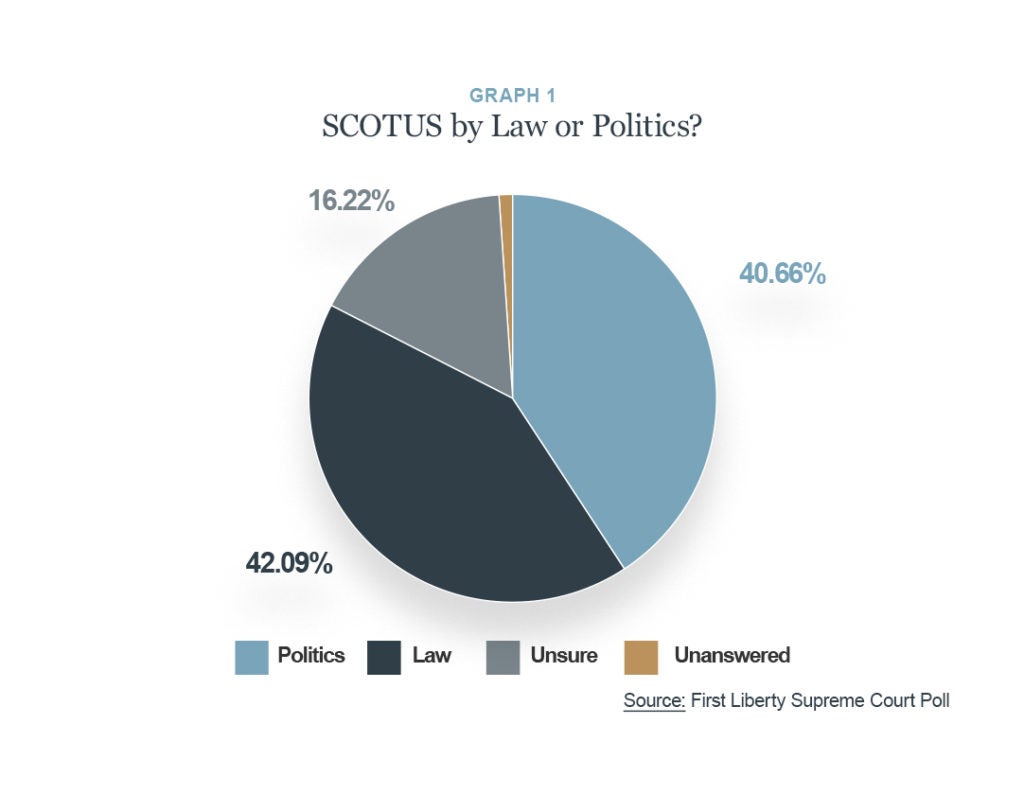 The answers to the first question were the most varied. According to our Insider results, the split between law and politics was almost the exact same. Each took an almost equal percentage of the responses although many chose to select the third option: being unsure whether politics or the law was more of a motivation.

We also asked the same question to our followers on social media (Facebook and Twitter), and the answer was slightly more illuminating. 58% of respondents answered that they think politics is the main motivator for the Supreme Court. 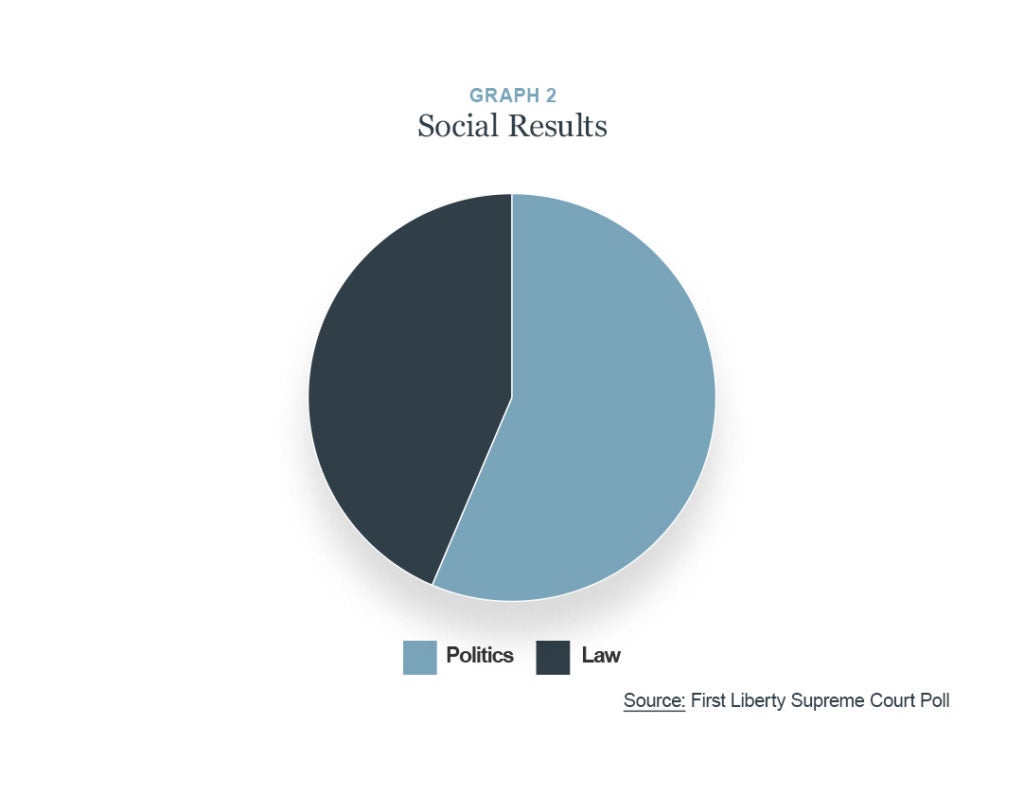 This is on track with the general population according to a Quinnipiac poll, which reported that 55% of Americans think the U.S. Supreme Court is mainly motivated by political concerns, instead of being focused on interpreting the law.

In order to end the influence of politics in judicial decisions, First Liberty continues to work hard by providing expert analysis so that only the best and most qualified judges who will follow the law as written in the Constitution are confirmed to America’s judiciary.

More Obstruction of Judicial Nominees Than at Any Time in American History – How Can We Put a Stop to It? Read more here.

Do you think the U.S. Supreme Court should be restructured in order to reduce the influence of politics?

The second question in the poll asked whether it is necessary to restructure the Supreme Court. By far the answer to this was a resounding “NO”. 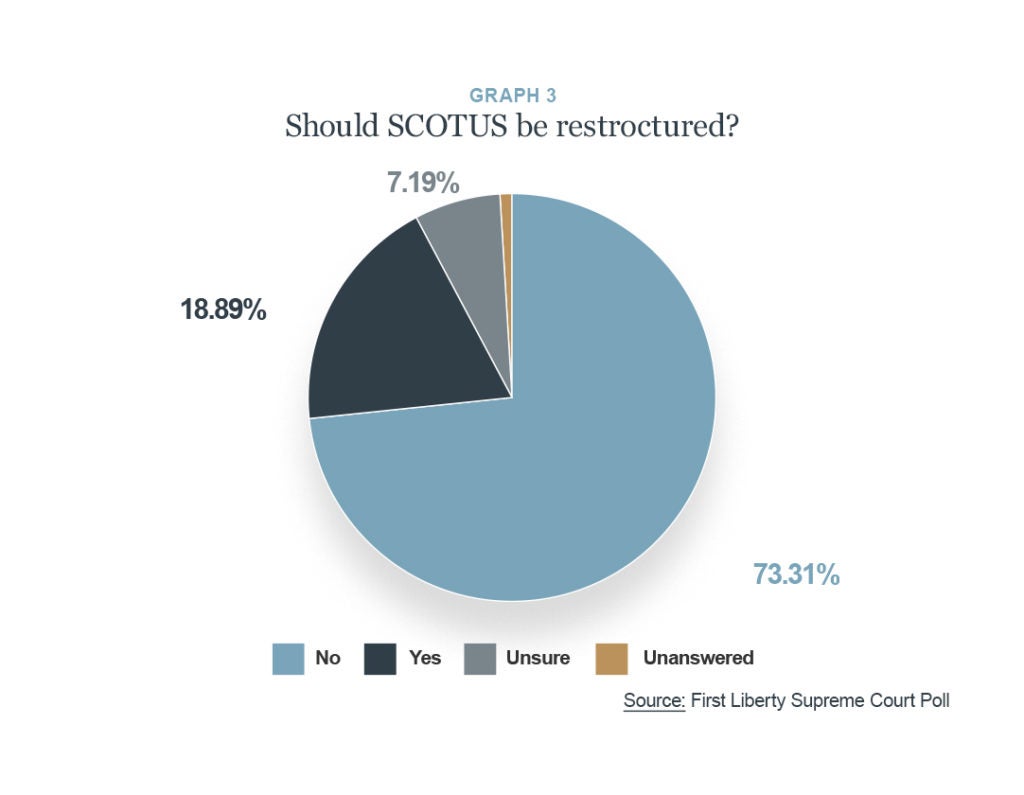 Based on these results, it appears that many First Liberty supporters see the inherent problem of politics seeping into the decisions and rulings of the Supreme Court. But, it also reveals that many think a total restructure of the High Court is not the solution.

Instead of overhauling the structure of the Court, many of you seem to agree that we must encourage the Justices to follow the original intent and text of the Constitution – in particular our First Amendment, which protects our first freedom: religious freedom.

Do you think that we should add more Justices to the U.S. Supreme Court?

Finally, we asked you whether we should add more justices to the Supreme Court.

An overwhelming number of respondents were adamantly opposed to adding any new justices to the High Court. In fact, less than 4% of all First Liberty supporters (including those on social media) said we should add more Supreme Court Justices. 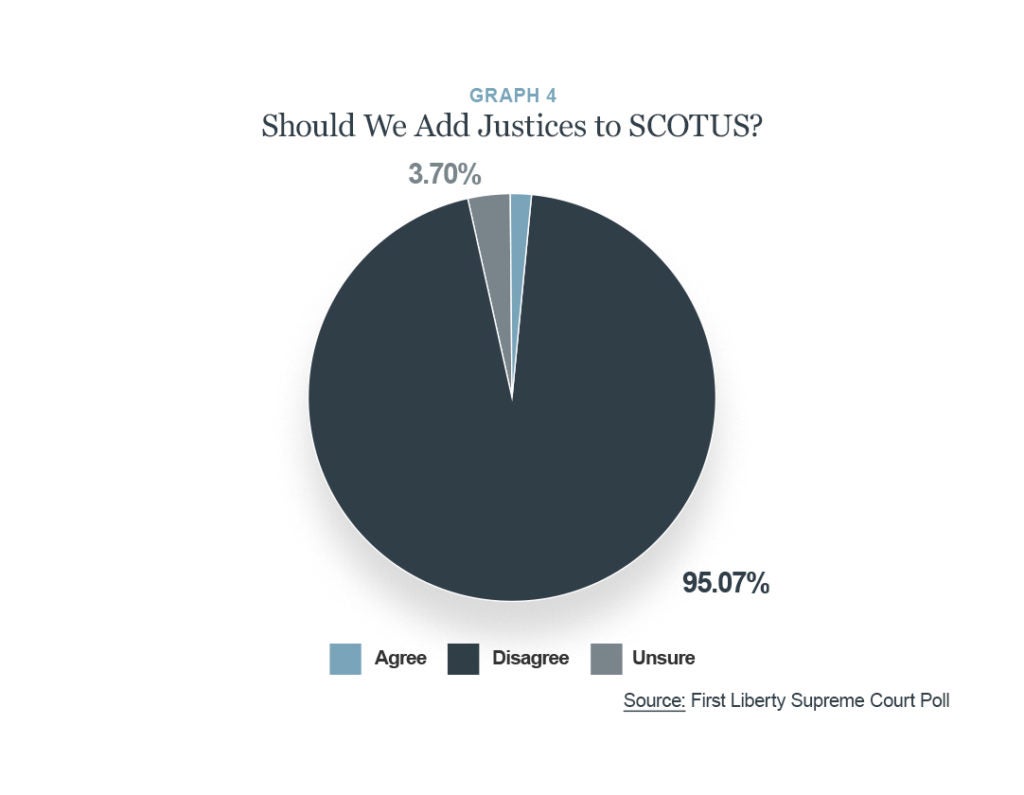 As our legal experts have explained, the problem isn’t necessarily with the organization of the Supreme Court. Much of the growing concern about the politicization of the judiciary comes from an increasing trend to use courts as mini-legislature. Far too frequently, court rulings aren’t an interpretation of the law, they are legislative edicts and policy prescriptions disguised in judicial opinions.

And according to these results, First Liberty supporters apparently think that adding 2, 4 or 6 more Justices to the SCOTUS bench would be caving into more political theater and gamesmanship, which are the root of the issue.

Thank you for participating in our Supreme Court poll. Follow First Liberty on our social media platforms, Facebook and Twitter, to get up to date information on the Supreme Court, judicial nominations as well as more interactive content.