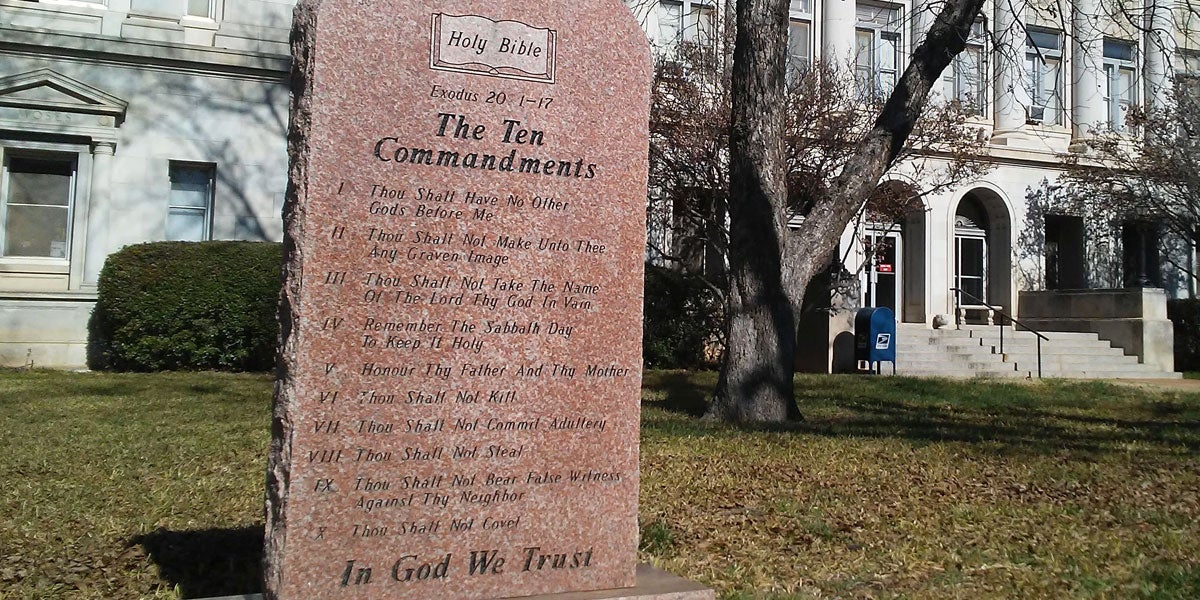 Thanks to First Liberty’s historic Bladensburg Memorial victory at the U.S. Supreme Court, the days of the “perpetually offended” roaming the land to scrub all public symbols of faith are over.

In this new era of religious prosperity, our country’s courts are coming “Back to the Constitution” and returning to a more historically accurate approach to our nation’s founding document. Across America, we’re seeing a vibrant comeback to the values, principles and ideals—like religious liberty—that made our country so exceptional in the first place.

In particular, we’re seeing a nationwide resurgence of religious freedom in local and state governments who are reclaiming their right to display religious symbols and references.

Right now, for example, the Oklahoma legislature is considering a bill that would require government state buildings to post America’s national motto, “In God We Trust.”

The public use of “In God We Trust” is a longstanding historical practice and it has served the purpose of bringing Americans together regardless of one’s individual religious beliefs. If the pending bill were to be signed into law, it would be consistent with the U.S. Constitution.

Just consider these facts, especially when opponents of religious freedom try to make the argument against the motto:

According to one estimate, more than 600 cities and counties across the United States display the national motto in some way, from office buildings to schools to police cars.

One of those counties is in the state of Florida, which officially adopted “In God We Trust” as the state’s motto over a decade ago. In Brevard County, Sheriff Wayne Ivey’s police cruisers now include the motto. He joins a growing number of law enforcement agencies around the country proudly displaying it on their vehicles.

In addition to “In God We Trust,” let’s take a look how historic religious practices, symbols and monuments continue to make an unprecedented comeback in the post-Bladensburg era.

A couple of weeks ago, the U.S. Court of Appeals for the Eleventh Circuit relied on the Bladensburg precedent when it issued a decision upholding the constitutionality of the Bayview Cross in Pensacola, FL. The 78-year-old cross was built in the Pensacola, Florida’s Bayview Park just prior to the start of WWII. It has served as a community gathering point ever since.

Last year, the U.S. Court of Appeals for the Third Circuit upheld the constitutionality of a seal in Lehigh County, Pennsylvania that includes religious symbolism.

In a brief submitted by First Liberty, our legal team argued that referencing religion in the seals, flags, and names of cities and communities is longstanding tradition dating back to our nation’s founding era. This is why the Third Circuit ruled that Lehigh County’s seal and flag fit squarely with our historic practices and are permissible under the U.S. Constitution.

Similarly, the Third Circuit issued another decision upholding the constitutionality of a legislative prayer policy enacted by the Pennsylvania House of Representatives.

The 2-1 decision stated that the First Amendment protects the state legislature’s right to have opening prayers for legislative sessions offered only by guest chaplains who believe in God, or a divine or higher power. Once again, the Third Circuit noted that Congress and state legislatures have approved and used theistic religious expressions as part of legislative invocations since the early days of the American republic.

Those who vehemently oppose the use of “In God We Trust,” religious imagery or faith-based symbols on public property aren’t just ignoring or willfully distorting history…they’re getting years of constitutional law and precedent completely wrong.

In Lynch v. Donnelly, the U.S. Supreme Court described the national motto as a lawful “reference to our religious heritage,” comparable to the recitation of the Pledge of Allegiance.

Even the notoriously liberal U.S. Court of Appeals for the Ninth Circuit, in Aronow v. United States, held that the motto is “patriotic or ceremonial [in] character” and “has nothing whatsoever to do with the establishment of religion.” Forty years later, in Newdow v. Lefevre, the Ninth Circuit reaffirmed its prior decision.

The national motto and historical religious practices are a visible reminder of the values and principles that we share, and of the rich heritage of faith in our nation. The public display of these longstanding symbols and traditions is, of course, protected by the recent Supreme Court precedent set forth in American Legion v. AHA, which states:

Thanks to the Bladensburg precedent, religious freedom is thriving in American public life and the evidence of a nationwide reclamation of America’s First Freedom is visible from coast to coast. Millions of Americans are once again free to live out their faith—including in communities, local governments and in states who’d previously been hesitant to exercise their constitutional rights.