If religious freedom in America ever dies, the story of Toni Richardson might exemplify one of the reasons. Richardson—once described as bubbly and outgoing—is now afraid to utter words like “God bless you!” in private conversations with coworkers, even if they go to the same church. Afraid to tell people she is praying for them. Afraid to wear religious jewelry.

But she is also fighting back, with the help of experienced attorneys, to keep religious liberty alive in her community and beyond. 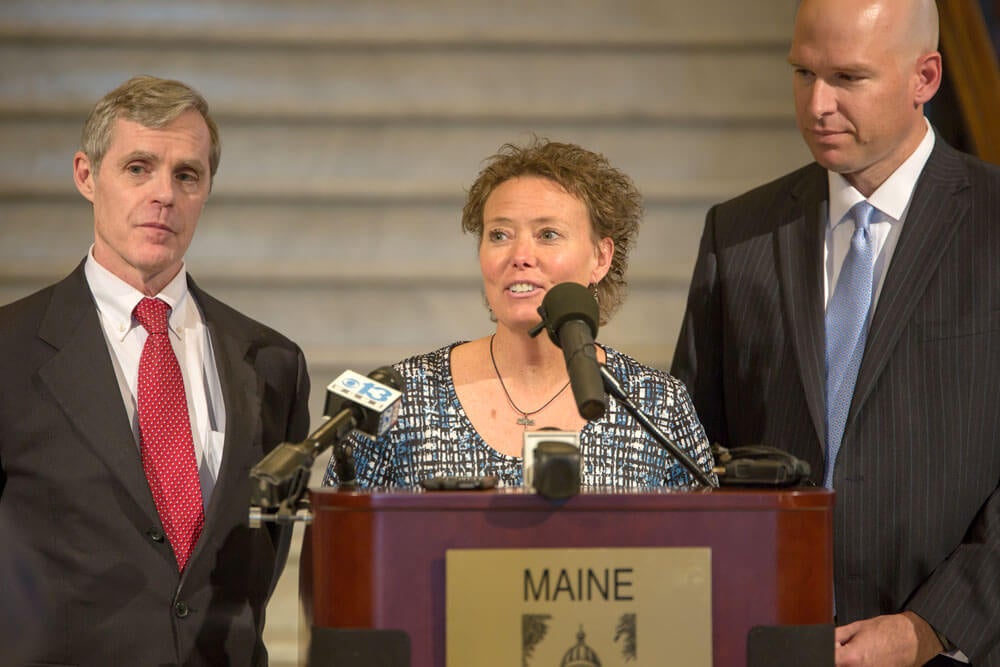 This week, on Tuesday, May 16, First Liberty Institute and the Maine law firm of Eaton Peabody filed a charge of religious discrimination and retaliation on behalf of Toni Richardson, an educational technician who was interrogated by a school official and banned from saying “I will pray for you” in private conversations with coworkers.

She also received a “coaching memorandum” that threatened disciplinary action—including possible termination—if Toni said anything in the future that school administrators judged to be “unprofessional.”

The complaint, announced at a press conference in Maine and reported by Todd Starnes of Fox News, was filed with the U.S. Equal Employment Opportunity Commission (EEOC) against the Augusta School Department of Augusta, Maine.
“No one should be threatened with losing their job for privately telling a coworker, ‘I will pray for you,’” Jeremy Dys, Senior Counsel at First Liberty Institute, stated in a press release. “School employees are not required to hide their faith from each other while on campus.”

“What Augusta Public Schools did by punishing Toni for discussing her faith in a private conversation with a coworker is unconscionable,” stated Timothy Woodcock, an attorney with Eaton Peabody. “The law is clear: employers cannot discriminate against employees who privately discuss their faith while at work.”

Toni Richardson is an Educational Technician in the functional skills classroom of a high school in Augusta, Maine. Her work involves helping special needs students with cognitive and emotional disabilities learn skills that will help them function in life.

The complaint noted that Toni is also a devout Christian who considers her faith to be a foundational and vital aspect of her life. She is active in ministry at her church and is a firm believer in the power of prayer. Her faith also affects how she looks at the world and the words she uses when talking with others.

However, in September 2016, a school official interrogated Toni about whether she had referenced her faith in conversations while at the school. Toni was asked if she had ever identified as a Christian to others, told people that she would pray for them, or made any “faith-based statement[s]”—even phrases like “That’s a blessing.”

The questioning about Toni’s expressions of faith resulted from one of her interactions with a co-worker. In a private conversation that occurred shortly after the beginning of the school year, Toni had attempted to encourage the coworker—who attended her church—by telling him that she would pray for him. The conversation took place in a classroom after the students had left and while Toni and her co-worker were alone. At the time, the co-worker thanked her, saying, “Thanks. That means a lot to me.”

However, the school official said that Toni was violating the First Amendment of the U.S. Constitution and told Toni that while she was on school property, she could not tell people that she would pray for them.

Toni later received an official “coaching memorandum.” The memo cited the “separation of church and state” and stated that it was “imperative” that Toni “not use phrases that integrate public and private belief systems when in the public schools.”

According to the memo, statements like “I will pray for you” and, “You were in my prayers” are “not acceptable – even if that other person attends the same church as you.”

Though the memo claimed that it was not “disciplinary,” it threatened “disciplinary action” and possible termination if Toni said anything in the future that was “deemed unprofessional” in the judgment of school administrators.

“I was shocked that my employer punished me for privately telling a coworker, ‘I will pray for you,’” Toni stated in the press release. “I am afraid that I will lose my job if someone hears me privately discussing my faith with a co-worker.”

In her complaint, Toni noted that after she was questioned, she stopped using language that included any faith elements—even phrases like “Praise the Lord” or “God love her.” She has also at times refrained from wearing religious jewelry out of fear that the school would consider it a violation of the memo and fire or discipline her as a result.

The First Amendment protects the right of school employees to freely express their faith and use religious references in private conversations—including those conversations that take place on school grounds.

As the complaint filed against the Augusta School Department argues, the school’s hostile actions against Toni constitute “unlawful viewpoint discrimination” that has been ruled unlawful by the U.S. Supreme Court. In addition, employers who discriminate against religious employees who privately discuss their faith can be held liable under Title VII of the Civil Rights Act of 1964.

First Liberty is dedicated to ensuring that Toni and other school employees will not be forced to hide their faith at work. To learn more about religious freedom in the public schools, download First Liberty’s free Religious Liberty Protection Kit for Students and Teachers.