Supreme Court Remains Most Trusted Branch, but Court-Packing Would Crush Any Confidence in the Judiciary

Which branch of the federal government do you trust the most?

The President? Congress? The Supreme Court?

Gallup reports that a vast majority of Americans—an average of two-thirds or more—say they have a “great deal” or “fair amount” of trust the judicial branch. The same polling shows over the past two decades, the U.S. Supreme Court has consistently ranked as the most trusted branch of the federal government.

As recently as 2020, sixty-seven percent (67%) of Americans stated having confidence in the judiciary, compared to only forty-three (43%) and thirty-three (33%) for the executive and legislative branch, respectively.

But is public confidence in America’s highest court waning?

Some would suggest it is, at least when looking at a recent Gallup poll noting that fifty-four percent (54%) of Americans say they trust the Supreme Court, a sharp thirteen (13) point drop compared to 2020.

Despite the decline, the Supreme Court remains the most trusted branch.

But make no mistake. If Americans are to continue trusting the Court as a legitimate, impartial institution that administers justice, then we must denounce the most pressing threat to the integrity of the judiciary: Court-packing. 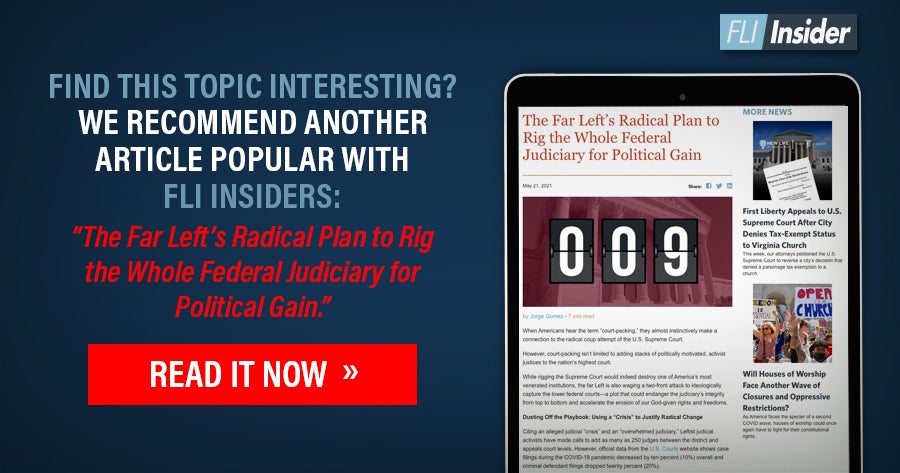 From Trust to Tyranny? The Dangers of Politicizing the Supreme Court

In his new book, The Authority of the Court and the Peril of Politics, Justice Stephen Breyer warns about the consequences of a politicized judiciary, where courts become extensions of the ruling elite. He writes:

“The [Supreme] Court’s power, like that of any tribunal, must depend on the public’s willingness to accept and follow its decisions.”

He adds that before jumping to implement so-called “reforms” and proposals to expand the size of the Court, Americans should:

“…Take account of certain background considerations, such as the trust that the Court has gradually built, the long period of trust needed to build that trust, and the importance of that trust in a diverse nation that values, indeed depends upon, a rule of law.”

In other words, trust—not power—is what binds Americans to the judiciary as an institution. Stacking a slew of liberal judges on the nation’s highest court would destroy that trust.

Though court-packing is presented as a benign “reform,” this scheme would do more to “deform” the Court. It would disfigure the original intent of the judiciary, reducing our nation’s most trusted institution into a hyper-partisan tool, a “tribunal” freighted with political hacks, “politicians in robes” waiting for instructions from party headquarters.

A judicial system rigged to favor politics would create widespread skepticism, cynicism and distrust of opinions issued by a “Democratic” or “Republican” court. Virtually no one would take the Court’s decisions seriously.

Once the judiciary becomes a rubber-stamp for the pleasure and policies of those in power, the rule of law would be all but extinct in our nation. It wouldn’t be long before Americans lose confidence in the authority of the courts, knowing that politics trump the law.

Ultimately, without the rule of law and an independent judiciary, the very foundation of our Republic is in peril. The Supreme Court operating as a political puppet would be a prelude to tyranny where our rights and liberties (including religious freedom) come not from God, but from the government.

A Priceless Heritage That Binds Americans Together

In today’s divisive climate, it’s difficult to focus on the issues that bring Americans together. After all, the Left’s scheme to pack the Supreme Court isn’t built on a foundation of unity, but of division. To justify their Supreme Court Coup, court-packing proponents have constantly painted a caricature of a Supreme Court that’s broken and divided along party lines.

Even still, a majority of Americans do appear to be on the same page about what court-packing really is: A brazen attempt to overthrow the Supreme Court and grab more political power. Polling reflects this, showing us that sixty-eight percent (68%) of American voters oppose court-packing.

Justice Breyer writes in his book, “I routinely observe Americans’ willingness to respect the Court’s authority, and how that willingness helps keep our nation together.” Without trust in the Supreme Court, America’s unique and special constitutional system—one that’s historically shone as beacon of freedom to the world—cannot survive for very long.