Supreme Court Showdown: The Game’s Not Over For Coach Kennedy!

After a shocking decision from the Ninth Circuit, First Liberty gears up for Supreme Court appeal on Coach Kennedy’s case. 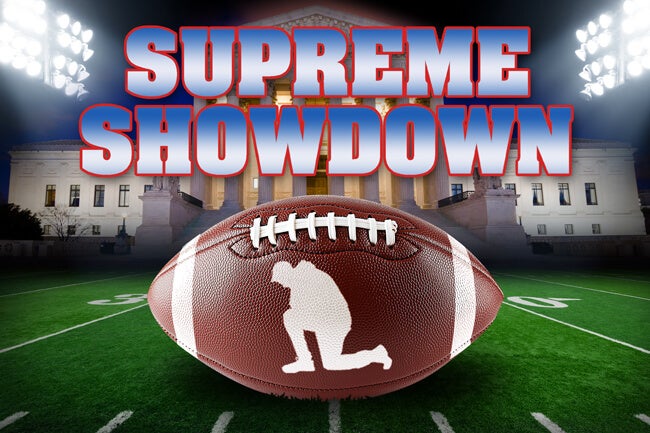 Can praying get you sacked from your job? That’s exactly what happened to high school football coach Joe Kennedy after a school district just outside Seattle, WA fired him for a 15-second silent prayer.

Even more outrageous is a ruling by the U.S. Court of Appeals for the Ninth Circuit that puts state employees in danger of losing their job if they dare to publicly express their religious beliefs.

“It is disappointing that the Ninth Circuit would refuse to hear Coach Kennedy’s case en banc, especially in light of the extreme, far-reaching opinion issued by the three-judge panel,” said Mike Berry, Deputy General Counsel for First Liberty Institute, who represents Coach Kennedy.

Restoring Coach Kennedy’ rights may indeed prove to be one of the most definitive battles fought for religious liberty in the last decade. But the final whistle has not yet been blown, and Coach Kennedy still has options in his playbook.

First Liberty attorneys intend to appeal the Ninth Circuit’s denial to the U.S. Supreme Court, which could make this a landmark case.

FAITH IN THE RED ZONE

The implications of the Ninth Circuit’s decisions are staggering and dangerous – putting Americans of all faiths in the red zone.

For one, the Ninth Circuit’s prior ruling could make it permissible for school districts and government agencies to dismiss employees for allowing their faith to be seen in public.

“Banning all coaches from praying individually in public just because they can be seen is wrong,” said Kelly Shackelford, President and CEO of First Liberty. “This is not the America contemplated by our Constitution.”

By refusing to hear Coach Kennedy’s case, the consequences of that ruling are likely to be even more threatening. Essentially, the Court is saying that it is now okay to go after millions of public employees if they are simply living according to their religious convictions.

Berry explains, “If the Ninth Circuit’s decision is allowed to stand, Jewish teachers can be fired for wearing a yarmulke in sight of students, Catholic teachers are at risk if they wear a crucifix, and Muslim teachers may face discrimination for wearing a hijab to work.”

Make no mistake. Radical groups believe that prayer or religious expression by public school staff should not be visible in public. Based on their longstanding record of hostile attacks, these groups will exploit the Ninth Circuit’s actions and use them in their plot to extinguish religious expression from public life.

The “other team” may have edged in a narrow victory at the Ninth Circuit, but Coach Kennedy – with the help of the First Liberty team – has more than a fighting chance.

In fact, perhaps the most powerful statement about this case has already been made. Almost 50 years ago, in Tinker v. Des Moines Independent Community School District (1969), the U.S. Supreme Court declared that neither teachers nor students “shed their constitutional rights to freedom of speech or expression at the schoolhouse gate.”

Additionally, one court affirmed in Chandler v. Siegelman (2000) that the Constitution “does not permit a public school to confine religious speech to whispers or banish it to broom closets. If it did, the exercise of one’s religion would not be free at all.”

AN INTENSE SHOWDOWN AT THE NATION’S HIGHEST COURT?

Coach Kennedy’s case comes at a crucial and decisive moment for religious liberty in America. Getting the “WIN” is of monumental importance in preventing flagrant violations of religious freedom from occurring in the future.

As First Liberty attorneys prepare to file a petition to the Supreme Court on Coach Kennedy’s behalf, they are also anticipating that the opposition will intensify its efforts to bully, intimidate, and demoralize people of faith – trying to get them to believe that Coach Kennedy does not stand a chance.

Fortunately, First Liberty has a proven and successful track record in stopping the opposition’s hostile assaults and restoring religious liberty for millions of Americans. Without a doubt, obtaining a victory on Coach Kennedy’s case will take grit and perseverance – but First Liberty attorneys are prepared for the showdown.

The field has been set, and Coach Kennedy is not going down without a fight.