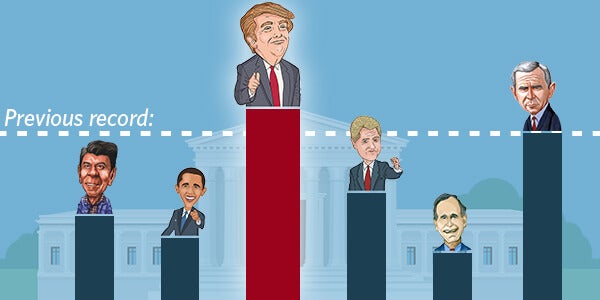 With a Steady Stream of Exceptional Nominees, President Trump Is on Pace to Set More Judicial Confirmation Records

Even before the start of his second term, President Trump has already had himself a judicial confirmation juggernaut.

With the support of Senate Republicans, the President has already succeeded in confirming a record number of judges to the circuit courts. And by looking at the numbers today, the horizon is looking brighter for the upcoming year.

If Senate Republicans are able to capitalize on the success and the momentum they’ve generated over the past 18 months – sustaining the rate of confirmations seen so far – then it’s possible we could see more record-breaking confirmation figures before the end of Trump’s first term.

In this Liberty Watch feature, First Liberty gives you expert legal insight on the current status of judicial vacancies and what the landscape looks like for future confirmations.

Learn more about judges and the status of confirmations with our interactive maps and expert insight.

When he first took office, President Donald Trump was handed a list of 104 federal judicial vacancies, nearly twice the number (53) that his immediate predecessor, President Obama, had to fill at the start of his first term. 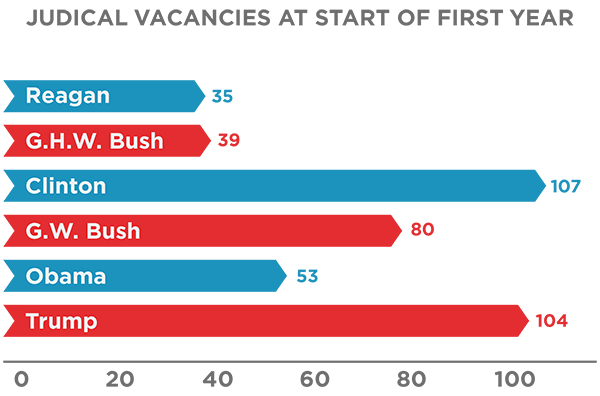 But although many considered this daunting – or even outright impossible, President Trump tackled the challenge fervently from the outset. In his first year, the President put forth 69 judicial candidates, outpacing the number of nominees of every preceding president dating back to Ronald Reagan. 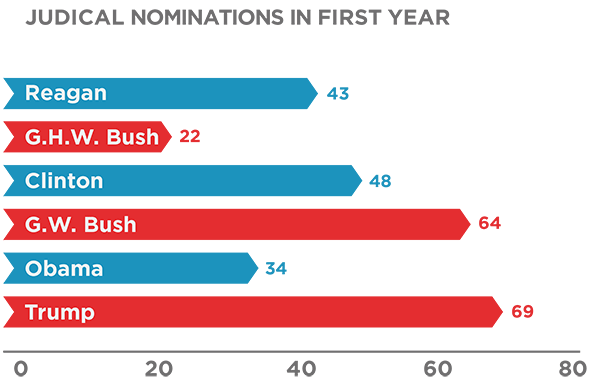 And the President’s first-year nomination efforts – along with the rigorous discipline of Senate Republicans – paid off handsomely.

To really grasp the President’s success on this front, consider the number of Trump nominees actually confirmed to the district and circuit courts, which as of today stands at 68. That’s a solid figure, especially in comparison to the initial number of vacancies Trump was handed when he first took office.

Today, we see a similar scenario in the works, as there are 128 federal judicial vacancies in the district and circuit courts combined, far higher than there were at the start of President Trump’s administration.

Nonetheless, the numbers show that the President has continued to make judicial nominations a priority. As of today, there are 66 pending district and circuit court nominees waiting to go before the Senate for consideration and a final confirmation vote.

This reveals that the President is maintaining a steady stream of nominees.

But it’s much more than a “numbers game.”

The President has delivered time and time again on his promise to put forward judges with exceptional legal credentials and whose judicial records reflect an originalist approach to the First Amendment – and the Constitution as a whole.

“This is the time to step up our efforts. More of President Trump’s excellent, textualist judges must be confirmed to the federal bench,” says Kelly Shackelford, President and CEO of First Liberty Institute. “And because First Liberty fights a record number of cases at the federal courts where those judges will sit, Americans can have greater confidence that their religious liberties will be protected and upheld.”

Shackelford continues, “Right now, people of faith have a window of opportunity to make a generational impact in the makeup of our federal courts – but that window could be closing and we need more Americans to join us in the confirmation effort right away.”

Today, conservatives and people of faith need to urgently and insistently press the U.S. Senate – particularly Mitch McConnell and the Republicans – to confirm more of President Trump’s nominees.